If I must, I will begin with an apology—I’m sorry. I missed the first band. 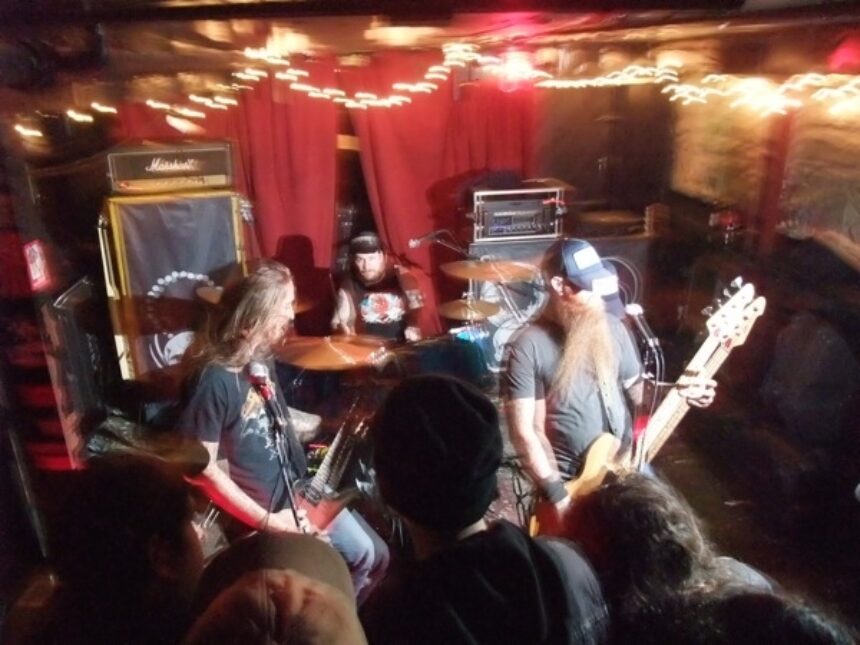 I overheard they were working a catchy doom groove, by which I mean plowing through songs marked by a devilish manipulation of tone and an overriding dedication to the riff, blown-out, stripped-down blues-psych rising from a pit of resin at the pace of a dinosaur skeleton. Spooky and deep, I could imagine, against my better inclination, music blaring from either a stoned teenager’s bedroom or the cellar of a deranged government employee. Upstairs the DJ was spinning dubious hits of the metalcore-to-shwank-rock genre. More than a couple of songs employed the same peculiar rhythm, that manner of jam blared over the PA at a major league sporting event when the telecasters break for commercials. Did I mention this place gives out free pizza with each purchase of booze?

“How much is it?” I asked the guy behind the podium obstructing access to the stairwell that led into the basement, the smell of which I’d later have considerable difficulty describing. “Ten dollars,” he said, “it’s worth Black Cobra alone, dude.” So that was the headliner. The show had been advertised as featuring “Special Guest” or some such title from Southern Lord, a label recently having released sufficiently monumental—that is, at once crushing and transcendent—stuff by contemporary heavy luminaries Sunn O))) and Pelican. The idea of the low end moving through me like a boulder was almost too much to bear. But I had time to prepare.

Javelina—pronounced “hä-va-’lE-na”—plugged in and brought the ruckus. And when I say ruckus I mean, of course, death metal. Comprised primarily of huge dudes with huge beards from Philly, Javelina nonetheless called to mind the coast of Sweden more than the nearly non-existent coast of Pennsylvania, which I, for better or worse, automatically associate with the sound of Kid Dynamite. Taking a dual vocal approach that ranged the growling registers of Todd Burdette and the snarl of Tomas Lindberg, Javelina wove squealing accents over the relentless swaggering gallop of drums, the deliberate and slithering rhythm and bass compelling a few cases of preposterously sincere headbanging. Javelina wrapped up and I, coming to my senses, noticed that smell again, the stink I guess a Dark Ages dungeon might have assumed. I got back upstairs just as a door guy was ‘86-ing a couple of intoxicated guys. In the brief fracas one of the incensed bros dropped some folded bills, which almost nobody noticed. In no time the floor began rumbling and I headed back down.

The septic aroma of the basement had now taken on a faint note of cannabis. Thankfully, Black Tusk had the space pumped full of their swampy fury within seconds. Though their sound may be said to typify sludge metal of the aughts, I’d prefer to say they walk the lines between punk and metal and good ol’ Southern rock. In fact, I’d much prefer to say Black Tusk conjures visions of a viper battling an alligator on top of a massive boar made of steel tearing through the wilds of Georgia. They’ve recently released two new 7″ splits, one with The Holy Mountain and one with tightly-coiled Fight Amputation, as well as a new 10″ with Wilmington’s swanky ASG. 2008 had them releasing the full-lengthPassage Through Purgatory, an indispensable entry in the record collection of any self-respecting “loud music” nerd. Black Tusk tore through offerings like “Fixed in Ice” with a combination of precision and abandon. Shirts got whipped off, hair whipped around. The crowd got to dancing, by which I mean pushing into each other with hips and shoulders, pointing at the ceiling with a fist or an index finger—a few devil horns here and there—and subject to that ineffable Southern U.S. charm that keeps even a band like Lynyrd Skynyrd relevant, a couple of well-heeled Euro-tourists who’d perhaps lost their way were eventually shaking like possessed rag dolls. “We got two more songs. This next one’s about Satan,” said Athon, the fully-tattooed bassist with an epic beard, and it seemed too soon. 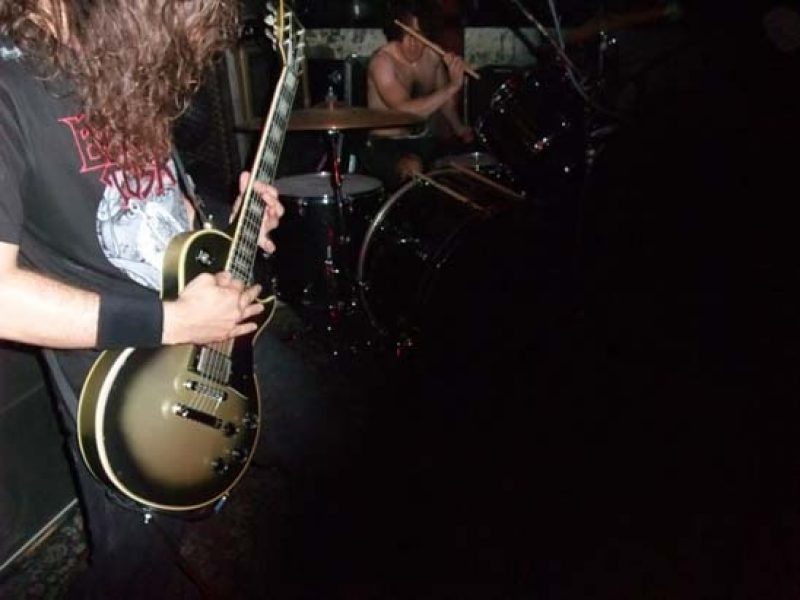 I went upstairs to finagle some pizza but gave up and, returning to the basement strung with tiny sallow lights, found to my mixed displeasure that I could no longer perceive the malodorous presence. I got up in front, right next to the rows of guitar pedals. A few individuals with expensive digital cameras and detachable flashes had been snapping away throughout the show, but once Black Cobra—not to be mistaken for the defunct Cobra Noir—kicked in, the bursts of light from all angles of the sweating room became more frequent and more disorienting. Black Cobra worked through the hits of their reputation-making Bestial and the newly-released and already much acclaimedChronomega, creating not what I would describe as a wall of sound, but an ocean of sound, an ocean of sound populated with the sort of writhing tentacled masses featured on the cover of their first long-player. Though a duo, Black Cobra comes on stronger than most five pieces, the guitar and drums surging together with the heft and roar of some monstrous engine designed to build mountains. They don’t pummel the listener into dumb submission, but ensnare, transfix. I was standing perhaps too near the speakers for my own good. I had decided in favor of earplugs, but with a song the likes of “El Equis,” I could feel Black Cobra thrumming through my ribcage, winding around my own pulse. I was roused from my trance by a hand tapping insistently at my shoulder. A man in a beard and long hair asked me to move from where I was standing. Befuddled, google-eyed before the flashing cameras, the throbbing bass roiling in me a vague sensation of vertigo, I moved aside. The man then extended his arm with a little flourish, like that employed by a cheery door man. A young woman, about 5 feet tall, assumed my spot right up front. Meanwhile I now had to stare at the back of the courteous, if not chauvinistic, beard-o. I tried to maneuver my way towards a better vantage across the room but ended up getting caught in the middle of the swaying crowd, though never minding shoving and being shoved back and forth, the thunderous motif crashing through our bodies. I figured they’d probably have shirts for sale.