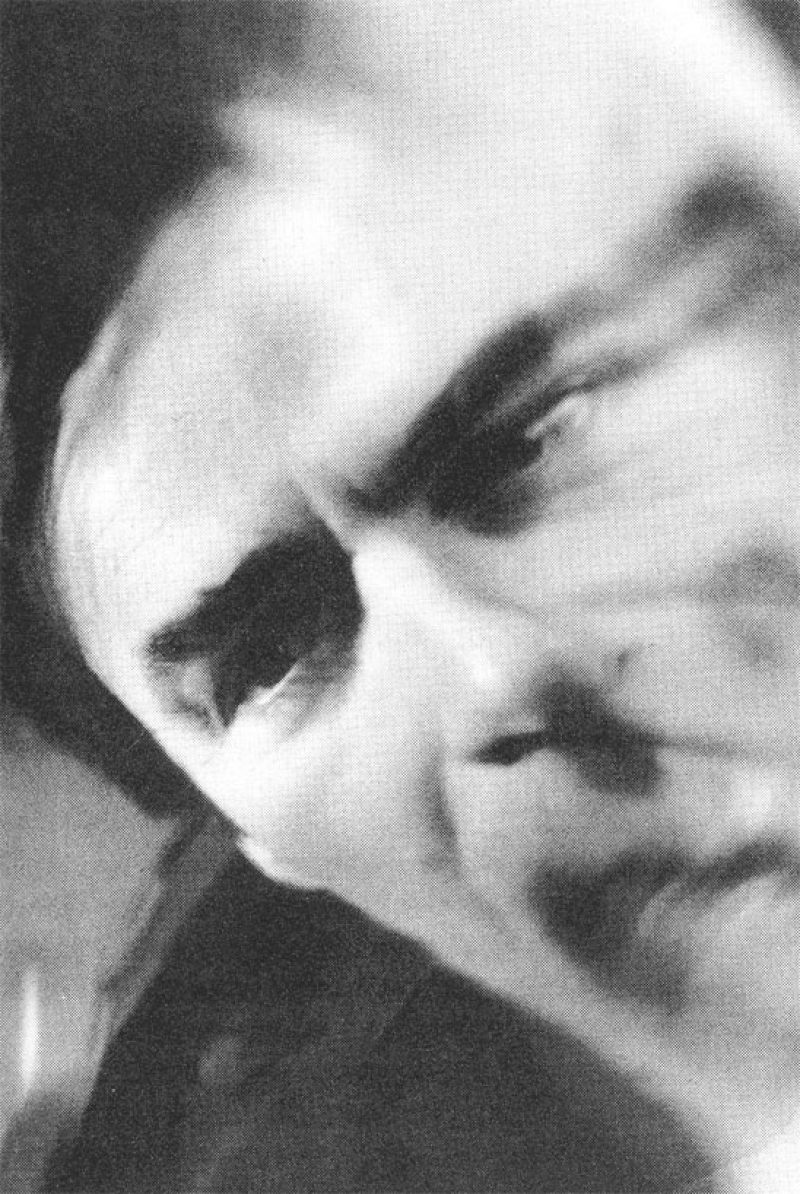 What unites the work of Polly Apfelbaum, Bill Barrette, and Nancy Shaver is their incorporation of objects and images that have a history of prior use, “found” objects and images, if you will. These interviews underscore that the haunting, magical quality in their work has as much to do with the clarity of their presentation as it does with any patina of age that has accumulated around their treasures. And it’s important to note that, whatever common grace their work shares, their motives and intentions are highly singular.

Stephen Westfall The lenses in your photo-constructions are “found.” In fact, they’re often not lenses at all. They’re plastic bubbles that have come from industrial templates: funnels, hubcaps, etc.

Bill Barrette Well, none of the lenses are made of any single component. Usually, there are two or three. Often, the first thing I make will be the lens and that sets up the core, and the interrelationship between the different levels in the pictures.

SW So you’ll have a found oval or a rectangular photographic print held in front, and one or two lenses piercing it, penetrating the framed print—four lenses in the case of this work here.

SW What led you to the daguerreotypes and lenses?

BB That came out of my work with photography, which began in ’84.

SW The photography that you were doing with the mummies?

BB They are Egyptian portrait heads, not mummies. Gradually. I started adding on a secondary portrait to those photographic works which actually led to viewing devices, and then the viewing devices led to the lenses. And that’s about the time I happened upon the daguerreotypes. I was attracted to the fact that they were the earliest photographs: it was going back to the beginning of photography and also to a time, which, as you know, was the beginning of the Modern period. 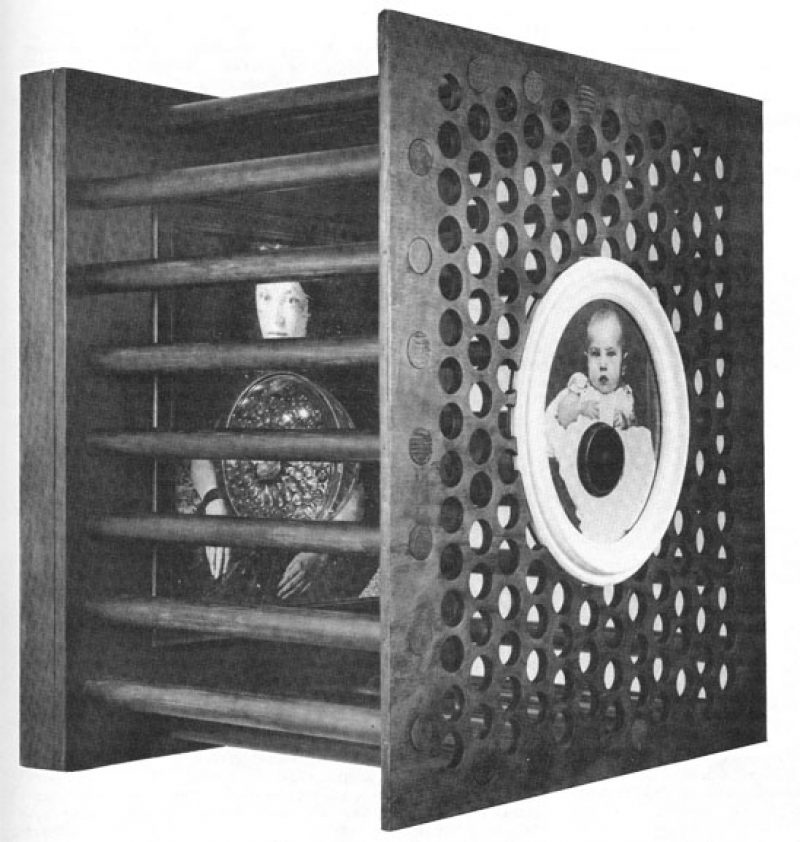 SW How do the daguerreotypes make a connection with the work you’d done in the past, with the Egyptian heads? Your work has many interrelated levels of meaning. There’s a formal structure, within that formal structure, always a kind of geometry, and within that there’s a reference to the body. Recent critical treatments discuss your imagery as an archetypal and archival record of the human presence. This has been referred to in terms such as “fragility,” “nostalgia,” “morbid.” Yet those terms seem to result more from a literary reading of the symbology and less from a formal reading of the interrelatedness of the body, the formal geometry, plus the image itself and its origins.

BB There’s certainly an objective quality and a subjective one working together in the pieces, and I think they’re equal. I want to keep them equally strong so that one doesn’t overwhelm the other, and maybe that’s what connects the daguerreotypes to the earlier portraits. I was interested in the Egyptian portrait heads because it seemed to me that it was the first time that the Egyptians had shown such a strong interest in realism. They were produced during a revolutionary period of Egyptian history which only lasted a short while.

SW When was that period?

BB Around 1350 BC, during the reign of Akhnaten.

SW And uniform stylization came in after that?

BB No, always with Egyptian art there is concern not with how something appears but how we know something, a mental knowing. Even today, there’s the question: do we paint what we see or do we paint what we know to be true? When you get into photography, you get into forms of realism that feature a dominance over vision and which take precedence over what Egyptians would consider the truth, or Plato would consider the truth of reality.

SW So there’s a difference between the face of things and their essence.

BB Yes, that split. Just from what I’ve seen and studied, this appears to he the first time this happens; very briefly in Egypt and then again in Greece in the 5th century BC. This anticipates the Western codification of vision as the sole basis for representation—first through Renaissance perspective then later with photography, which is a mechanical means of producing pictures in perfect perspective. It’s a retinal view of the world as opposed to a mental construct. In other words, the Egyptians would never construct something just purely based on how it looks, but how they know it to be. Combining mental knowing and visual seeing has, for me, a modern relevance—keeping these two things together. The structures of my new box pieces have a dominant frontal orientation which presents a system of viewing. But always in my pieces, you can go around and see the system at work. There’s nothing hidden there, there’s no mystery, yet the sum effect feels very mysterious.

SW In a sense, your work can be perforated by the eye.

BB It doesn’t mean you understand it, but there’s nothing hidden. You can observe everything. how an illusion is created, how an image can be upside-down on one plane and optically reversed on another plane. I want an art that can carry all this stuff, the ability to deal with the historical as well as the personal.

SW It’s funny how the aura of “personal” or “lyrical” content is an almost uncontrollable by-product of the meeting between any kind of record and the associative mind. The “material vérité” aesthetic of minimalism, for instance, was captured in a form of documentation that is, with time, revealing its own Gothic atmospheres, its dark shadows. Think of the heavy grained black and white photograph that looks like a rough cut from a Godard film, the cult of the installation shot, the attribution of Yankee curmudgeon personality traits to geometry such as Tony Smith’s “stubborn” cube, Die. Looking back, it seems that even this most pointedly unnostalgic art, this minimalist art which really refused to engage history in that way is being subsumed into that reading.

BB I think that’s a layer that, as you say, gets added on afterwards. At the time, the feeling was very much towards breaking with every possible tradition, every possible convention. It’s just a very American thing. It was impossible to be trying to make art at that time and not be influenced by that spirit, which was very strong for a rather short period of time. Now, I think many of these artists feel, “Well, you do need a past.” Most of these artists have now taken a different position.

It goes both ways. There’s an endless optimism that a break with history is possible, yet there’s a dark tendency which also goes towards an inwardness which realizes the impossibility of repeating the first moment and not having a sense of nostalgia. If you look, “nostalgia” is a word that is often used in relation to my work, it’s usually referred to as a sentimental longing for a return of some romanticized past or event. But if you look at the archaic roots of the word “nostalgia,” it is a longing, a sickness that comes from not having a center or native place to literally identify with. In the 20th century, there’s no idea of a fixed point in physics or art, it doesn’t exist really. To seek it becomes a romantic—I think people seek it and it becomes a dance with death; that’s the risk you run. There’s a fixed point in my work, obviously, but of course it is relative. There are others side by side with it.

SW Right, it’s fixed within its boundaries to have some sort of compositional stability, some satisfying lower center of gravity, or to speak to the symmetry of the body which, of course, all your work seems to address in one way or another. There’s even our sense of the placement of our organs, our feelings about left and right, floor and ceiling, and our sense of protocol. Despite the memorial or commemorative aspects of your imagery. I have the sense that your work deals with birth, or rebirth. It’s originary imagery. It’s not so much that images from history are found or preconceived on your part to give a sense of the oldness of the human record (or something not quite as honorable, like the mustiness which became style with the creation of the Michael Todd Room in the Palladium) but more to hold up moments that were beginnings. You talk about the beginnings of photography, the beginning of an interest in appearances in Egyptian art as opposed to essences. And in fact, many of the new pieces shed those dark atmospheres. You’ve used lead and some dark paint, but now a lot of the pieces have the look of hand-rubbed mahogany. Many of the pieces are white and the structures are aerated. The cage that holds the two picture planes together is traversed by that lens, is opened up and perforated by circles that are stamped into the top, cut out, so there’s a sense of buoyancy…

BB And transparency. Yeah, I think there are real possibilities there. I think my work does run the risk of being misinterpreted as very dark, interested in death. That’s a misinterpretation. I know that’s always a danger in the way that I work. I can accept that. I do think if people are careful, look closely, take time to see it; they’ll realize it’s much deeper than just that. Depth is important, depth and vision are different metaphors for those things, but it’s very important. And we keep coming back to find another level.

SW Those clusters of plastic halls that some lenses open onto resemble living material. They’re almost ovarian or originary themselves, splitting and dividing like a primal cell.

BB Suggesting a tremendous power of generation, an ability of an image to somehow continue generating well past its time, when it should be considered dead.

SW This may be part of the reason why the work strikes some people as being creepy or eerie… it’s powerful material. Each piece seems to return the viewer to some kind of confrontation with the body and some generating or perpetuating mechanisms of the body.

BB Yes, that is strange because the work is also geometric. And I think both these perceptions can coexist, you see, I don’t feel one over the other.

SW What I was musing about is how we live within a very puritanical culture that is preoccupied with the notion of escape… escape from the self, other cultures, but really escape from the body. The view of fundamentalist religion seems to be anti-body. The more we are confronted with the mechanisms of our body, the more we turn to our memory of the body, or our pre-existent knowledge of that, the more we are confronted with our mortality. So your work isn’t about death, but it does lead one into certain trains of thought sometimes, that the body is a machine that breaks down.

BB Something is being exposed here. Sometimes reminiscent of the inside of the body. And I think there are strong taboos against this idea of seeing what’s inside.

SW That becomes a very concrete and literal passage in your work from this Egyptian idea of the difference between appearance and essences because, in a way, your work explodes appearance off essence and lets the two exist.

BB I think that’s rather sane.