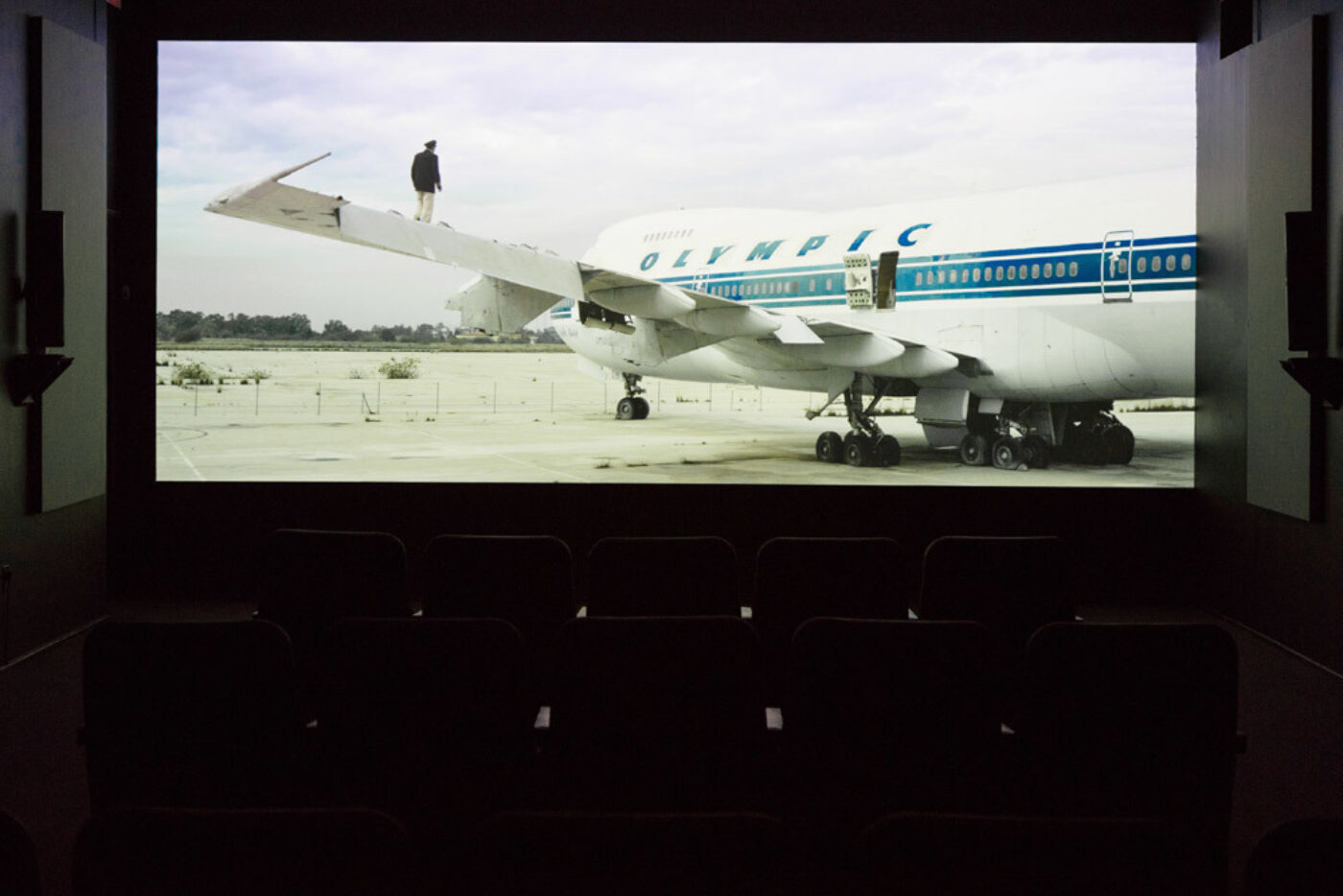 Artist and writer Naeem Mohaiemen has, over the last fifteen-odd years, created one of contemporary art’s most ambitious and experimental of documentary practices. His current exhibition, There Is No Last Man, at MoMA PS1 in New York provides a sample of his recent production, with a smaller space presenting the text-and-image work Volume Eleven (flaw in the algorithm of cosmopolitanism) (2016), and a larger, improvised theater screening the feature-length film Tripoli Cancelled (2017), both of which had originally been made in the context of documenta 14. Volume Eleven was, for those knowledgeable of Mohaiemen’s previous explorations, perhaps the more familiar of the two, delving into the ambiguities of South Asia’s modern history—and, more broadly, that of the troubled twentieth century—via his reading of a Bengali great-uncle’s writings of the 1930s, which displayed a disturbing sympathy for Hitlerian Germany as a potential counterweight to the English colonizer on the Indian subcontinent. Twelve photographs of this relative’s decaying library are each accompanied by a typewritten sheet of identical size, where Mohaiemen speculates upon the complex mix of motives for such a flawed “cosmopolitanism.” Volume Eleven’s rather unprepossessing quality was in stark contrast to the adjacent film, shot in crisp digital video, which follows an unnamed protagonist as he wanders through an abandoned airport over the course of a week, having been stranded there mysteriously for years. 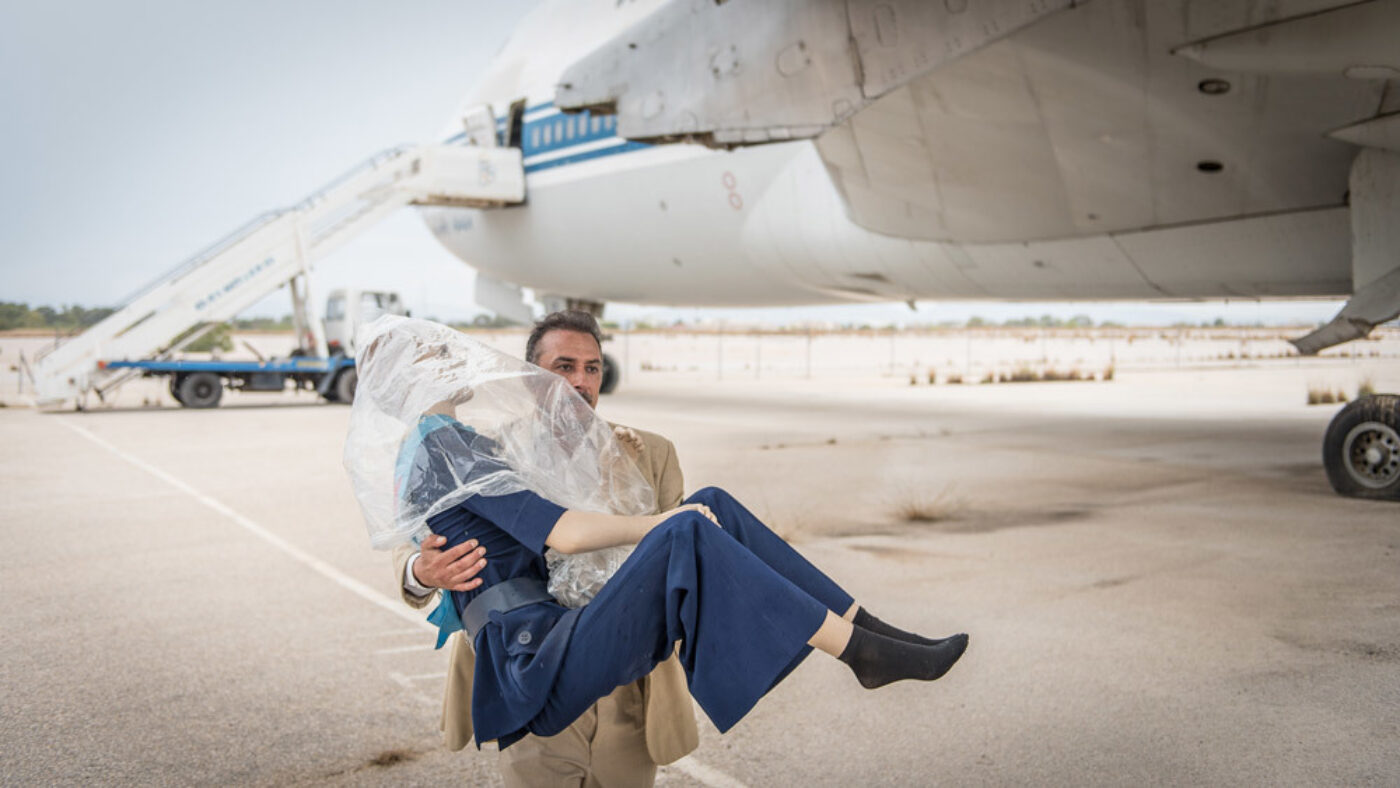 The film was shot entirely on the grounds of the former Ellinikon International Airport outside Athens, Greece, disused since 2001. The setting is an obvious, and frankly acknowledged, echo of John Akomfrah’s three-channel video installation The Airport (2016), and like the latter, Tripoli Cancelled also collapses various historical moments into an elastic no-time, what Mohaiemen has characterized as a “suspended time,” that echoes the no-place of the airport itself. It is loosely inspired by a family story: Mohaiemen’s father, a surgeon, had been sent to work as a doctor in Libya in the mid-1970s, and on one of his trips from Bangladesh, having lost his passport while in transit, he became stranded for nine days at this very airport. His experience of temporary statelessness is ably translated into the character portrayed by Greek-Iranian actor Vassilis Koukalani, whose sympathetic face and elegant bearing sustain the viewer’s interest across the film’s approximately ninety minutes. As he improvises a life amid this strange exile, the film’s protagonist invites us to enter his mind, which assumes the labyrinthine quality of the architecture through which he wanders. We watch him meander through empty halls, read aloud passages from Richard Adams’s 1972 fantasy classic Watership Down, improvise his bed on a baggage carrousel, boogie to Boney M.’s 1978 version of “Rivers of Babylon” (not coincidentally, a lament over exile), seek affection from a statuesque female mannequin in an Olympic Airlines uniform, and, most significantly, narrate letters back to his wife.

Those letters heard in voiceover form the critical core of Tripoli Cancelled, diverging from the more improvisatory, even at times playful, images that track our protagonist’s drift through the ruins of the twentieth century. In the opening shot, as he shaves off several days’ growth of beard, he tells of the arrival of refugees who attempt to dissimulate their national origins—“Burmese claiming to be Bangladeshi. Turks claiming to be Polish”—in a confused echo of contemporary news reports. Later in the week, as he follows the markings down a vast, empty runway, his letter begins with an inability to locate the qibla—the direction of prayer—before linking the notion “of kneeling in prayer, surrendering, letting going of pride and fear in front of the divine” with the German term Muselmann (literally, “Muslim”), used by both inmates and guards at Auschwitz to describe prisoners who had been reduced by the camp’s cruel conditions to “the space between being human and not … less than,” as the narrator says. Mohaiemen seems to be intertwining these two historical moments—the moment of the inception of “bare life” in the camp’s state of exception and the present moment of the so-called refugee crisis—so that his protagonist, this specific Muslim man, is able to at once reflect and inflect that terrifying pejorative, der Muselmann.

Such concerns with how Muslims have come to function as what Mohaiemen calls a “container for the Other” relate Tripoli Cancelled to the long arc of his oeuvre, extending back to works made over a decade ago as part of the post-9/11 collaborative Visible Collective. Yet if his documentaries have until now largely made use of those “poor images” defended by Hito Steyerl, in this, his first foray into fictional filmmaking, he has abandoned the degraded archival image in favor of the sharpness of digital video, shot by Greek cinematographer Petros Nousias. Mohaiemen has long exposed the surprises to be found within the historical archive, but with Tripoli Cancelled he has opened himself to the surprises discovered within the creative process itself, marking a new point of departure for his work.

Naeem Mohaiemen: There Is No Last Man is on view at MoMA PS1 until March 11.

Tom McDonough is a writer and critic based in upstate New York and Toronto. He is currently Associate Professor of Art History at Binghamton University.