On the risqué drawings of Sergei Eisenstein 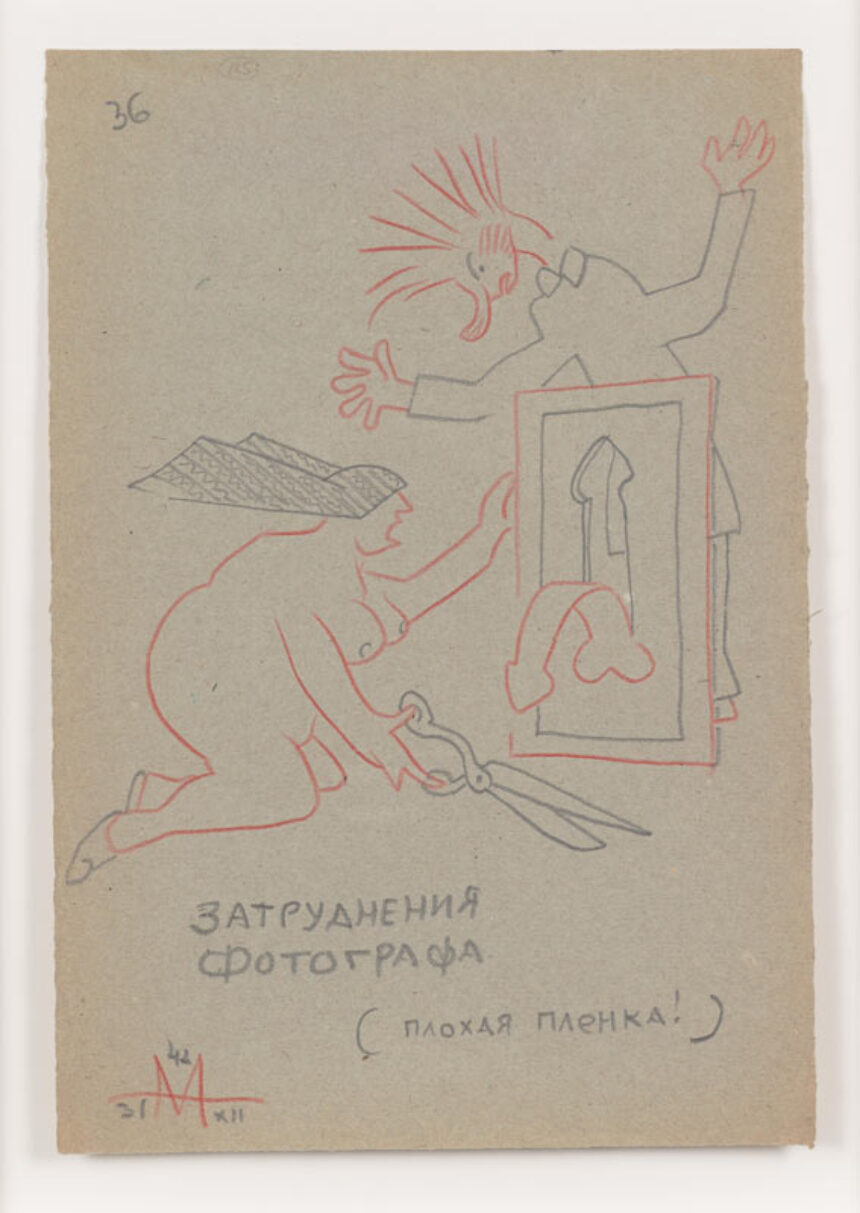 At the top of a narrow white staircase off 26th Street, a film shoot is taking place. Two make-up artists daub an actor with rouge; a harried costume designer straps a prosthesis to a toga-clad Nero in a French production; der Regisseur [the director] fusses while his cameraman naps. This affair is polyglot as well as pornographic: the German is chastising a naked couple, the prosthesis is a penis, and one can figure just where the rouge is being applied. Such is the imagery of these captioned drawings, made in 1941, culled from the prodigious paper works of the Soviet film director and theoretician Sergei Eisenstein. Historian Joan Neuberger puts the “conservative estimate” at 5,000; a judicious eighty-four drawings, held in a private collection, are now on view as “Sergei Eisenstein: Drawings 1931–1948,” at Alexander Gray Associates. In graphite or pencil, with accents in blue and red, the drawings are cleanly contoured, skillful variations on verboten activities. Couplings and positions include bull athwart man, priest atop steeple, and woman occupied by candelabrum—the latter sporting little martyrs from its seven candlesticks. The woman seems deeply pleased; the martyrs, being martyrs, less so. 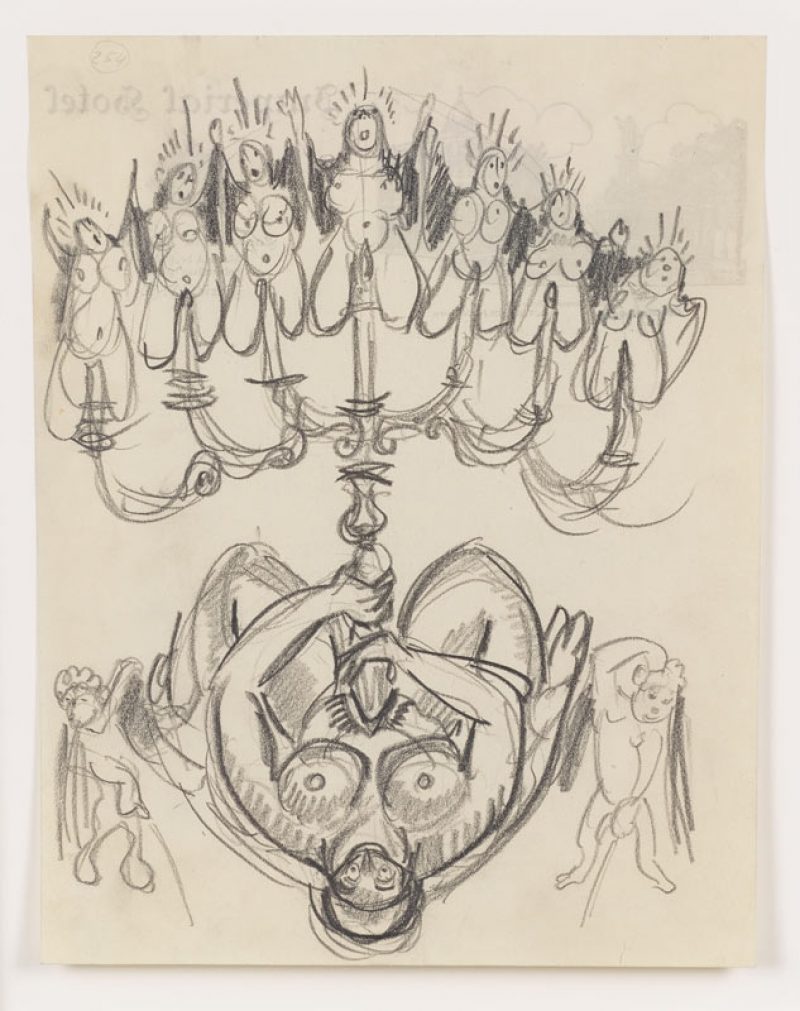 This drawing was made during Eisenstein’s time in Mexico, which was a renaissance for the director. Eisenstein was thirty-two in December 1930, when he crossed the border; he had already made Strike, Battleship Potemkin, and October, written about his theory of montage, and achieved homeland celebrity. His yearlong tour of Europe and the US was government-sanctioned, but his outings to drag nightspots wouldn’t have been. Plus, his recent Hollywood studio project had gone nowhere, and he hadn’t really drawn in eight years. Funded by the writer Upton Sinclair and his wife, whom he had met in the States, Eisenstein was to shoot fifty hours of film for a picture that would never be made (the Sinclairs took over the footage). But the drawings! Invigorated by the “wondrous soil of Mexico,” as he called it, Eisenstein filmed and filmed, and drew and drew on anything at hand—envelopes, loose sheets, hotel stationary. He also finally slept with someone he loved: a man named Jorge Palomino y Cañedo. He related this happy news in a letter to the woman he would later marry.

¡Que viva México!, a cut of the Mexican footage, is projected on the first floor of the gallery. It’s a tease—what would Sergei have done?— but the drawings hold nothing back. Eisenstein shot bullfights in Puebla, and drew male bulls and bulls with human breasts dallying with bullfighters. There are outsize priests molesting smaller indigenous men, then receiving a spiky comeuppance (“Supplire atroce de l’un des rares obispos ayant commis le péché sodomite”). In later drawings, men also have sex with gazelles and swans. A series of cute animals wearing long-nosed commedia dell’arte masks and doing their best by their female masters is so outrageous that it’s irresistible. 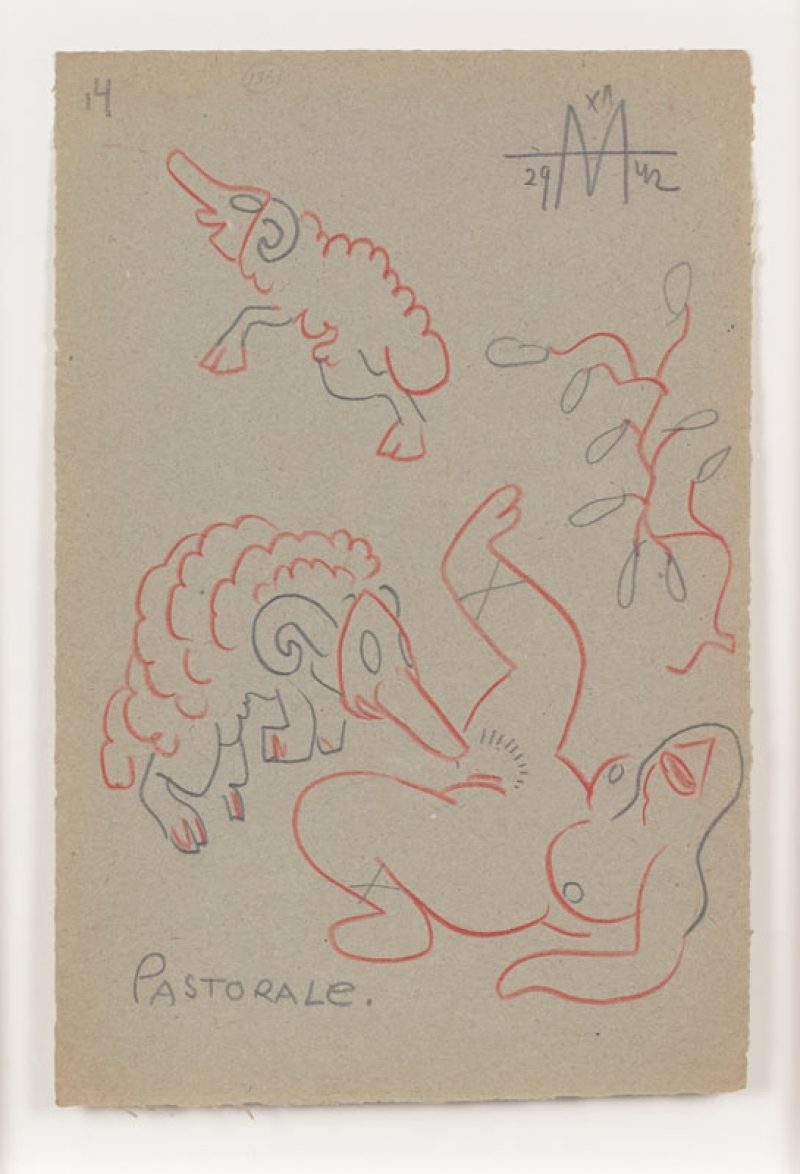 Eisenstein’s pairings of art objects and orifices are consistently strange, and often jokey; he showed some to friends, but they seem mainly to have been self-gratifying amusements, just like the oddities he collected in his apartment (an elaborate candelabrum among them). They’re only incidentally a travelogue, and not particularly titillating or erotic: only a very esoteric interest would be aroused by the union of man and Disney-fied giraffe (“Fallait bien, il me les gâtait tous”). They’re private puns, and also, as Neuberger and other scholars have argued, intrinsic to an understanding of Eisenstein’s subsequent aesthetic, particularly in Ivan the Terrible, Part I & II, the last film he would make.

In his book on Ivan, Yuri Tsivian writes that Eisenstein understood his bisexuality as “an interesting philosophical problem.” Bisexuality made one a site—perhaps the site—of the “dynamic unity of opposites.” This is also a good description of Eisenstein’s later theory of montage. Storyboards and notes for Ivan reveal that Eisenstein desired conflict both within the frame and among the shots; correspondingly, Tsar Ivan would be at war with himself and the rebellious boyars. In a creative war with Stalin, Eisenstein lost the chance to make Part III, but even the existing two-thirds of the project he envisioned hark back to the flowering of Mexico. An enormous flame-headed angel painted on the walls of Ivan’s throne room is as much Mexican mural as Orthodox icon; he’s so silly that he’s serious. A likely response to such strangeness—such dynamism—is awe: wonder at what’s possible. Fortuitously installed at Alexander Gray, Eisenstein’s unusual unions have a similar effect. The gallery will be closed on Friday, January 20th, to protest the upcoming inauguration, but on the 24th, the day after Eisenstein’s birthday, it will be open to anyone who foresees conflict and wishes to fortify herself. 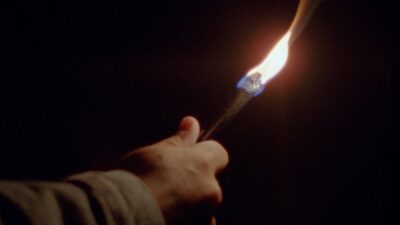 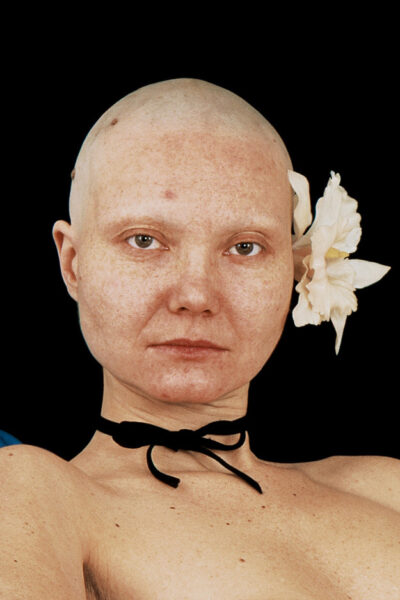 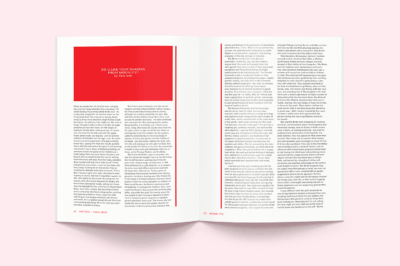