Aura Rosenberg—whose “The Golden Age” harkens back to the politics of appropriation of her earlier work—discusses her use of pornography with husband John Miller. 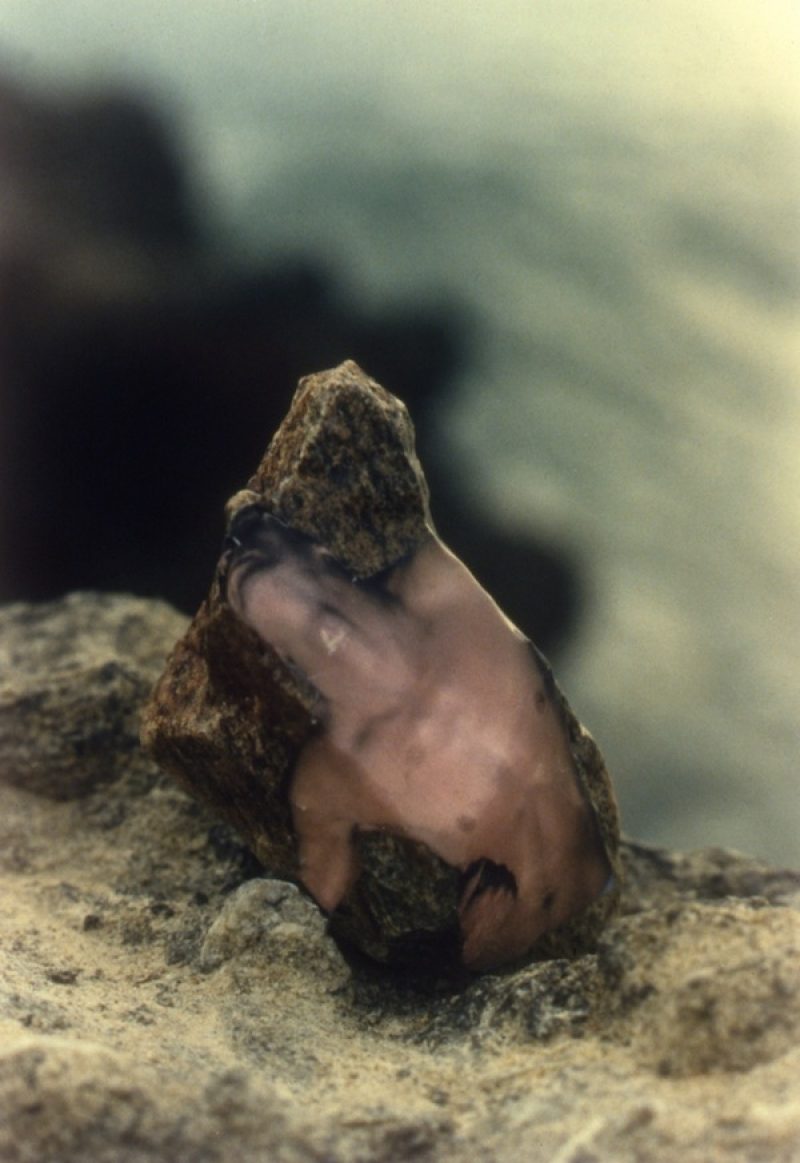 Aura Rosenberg began using pornographic imagery in her work about 25 years ago. After a period of intense activity, she stopped and moved on to other subjects, only to return to it in 2011. Much, however, had changed: the porn “industry,” the social acceptability of pornographic images, the kinds of cameras used to produce them and the kinds of media used to disseminate them. In short, very little stayed the same. Instead of taking a “bad girl” stance, Rosenberg raises the prospect of a feminine gaze. In the interview that follows, she and I discuss some of these issues and what they might imply.

John Miller When did you start working with pornography?

Aura Rosenberg It was the summer of 1988.

JM We already had been together for four years at the point.

AR No—more like two years. When we met I was making paintings by imprinting my body on canvas. We were just getting to know one another when you suggested we collaborate on these paintings. You built some shaped canvases—a cross and an x—and painted my body brown. I always felt that was your version of “Come up and see my etchings.”

AR The body imprints, for the most part, conveyed sexual allegories. For example, one group of paintings depicted the sexual positions that ostensibly represent the 12 astrological signs. These were based on a ’70s-era day-glo poster, “The Afronomical Ways.” I made many of the prints on brightly colored vinyl from Industrial Plastics, the store on the ground floor of our studio building. Some were printed on black velvet. In your work, I liked how you used brown acrylic to refer to feces, thus rejecting the idea of real, i.e., authentic, materials—namely shit. So, I think we were both focused on a split between the visceral and signification. Right around then, we rented a house in the Catskills with some artist friends. One of them was Mike Ballou who happens to be an avid trout fisherman. As a joke, I tore some images from porn magazines, pasted them on rocks, and then put them in the stream where he liked to fish. 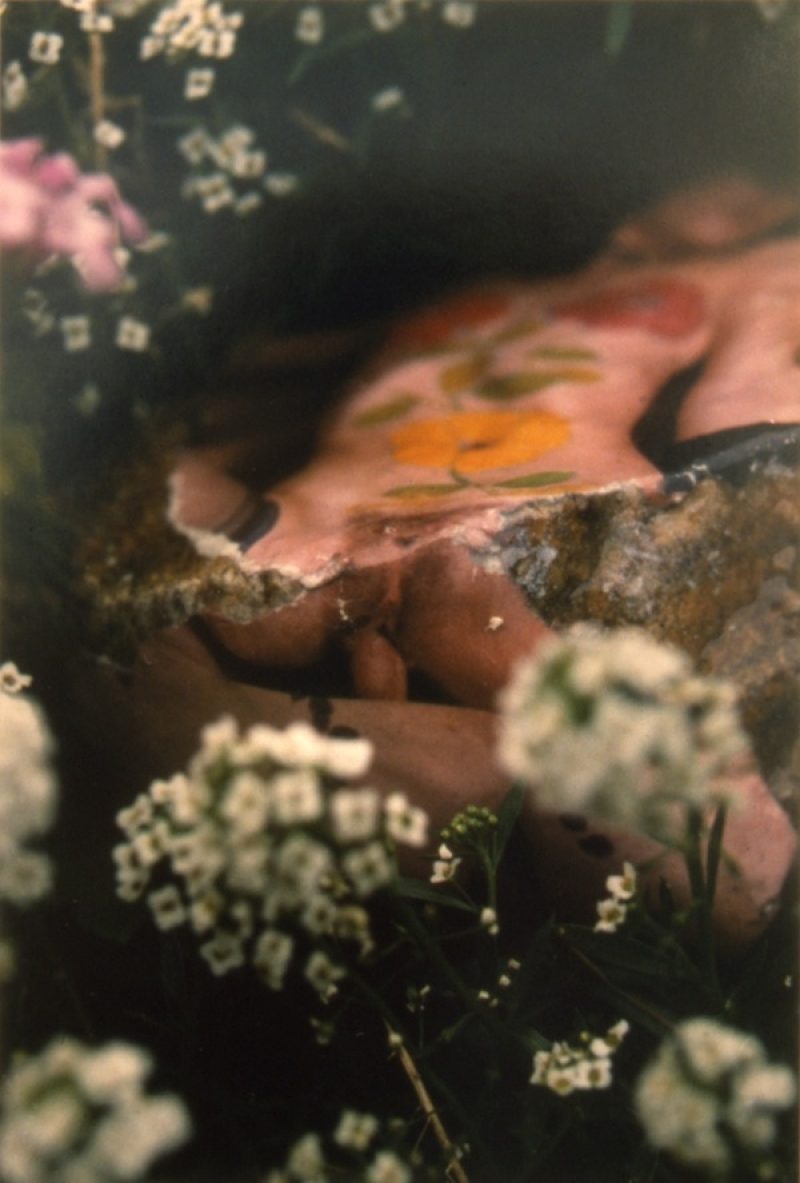 JM Why did you decide to stick with this?

AR Since we were spending so much time in the country, I didn’t want to stay inside all the time. Outdoors, I liked how sunlight, playing over rocks in a stream, could suggest images: the way we find images in otherwise amorphous forms, like clouds. 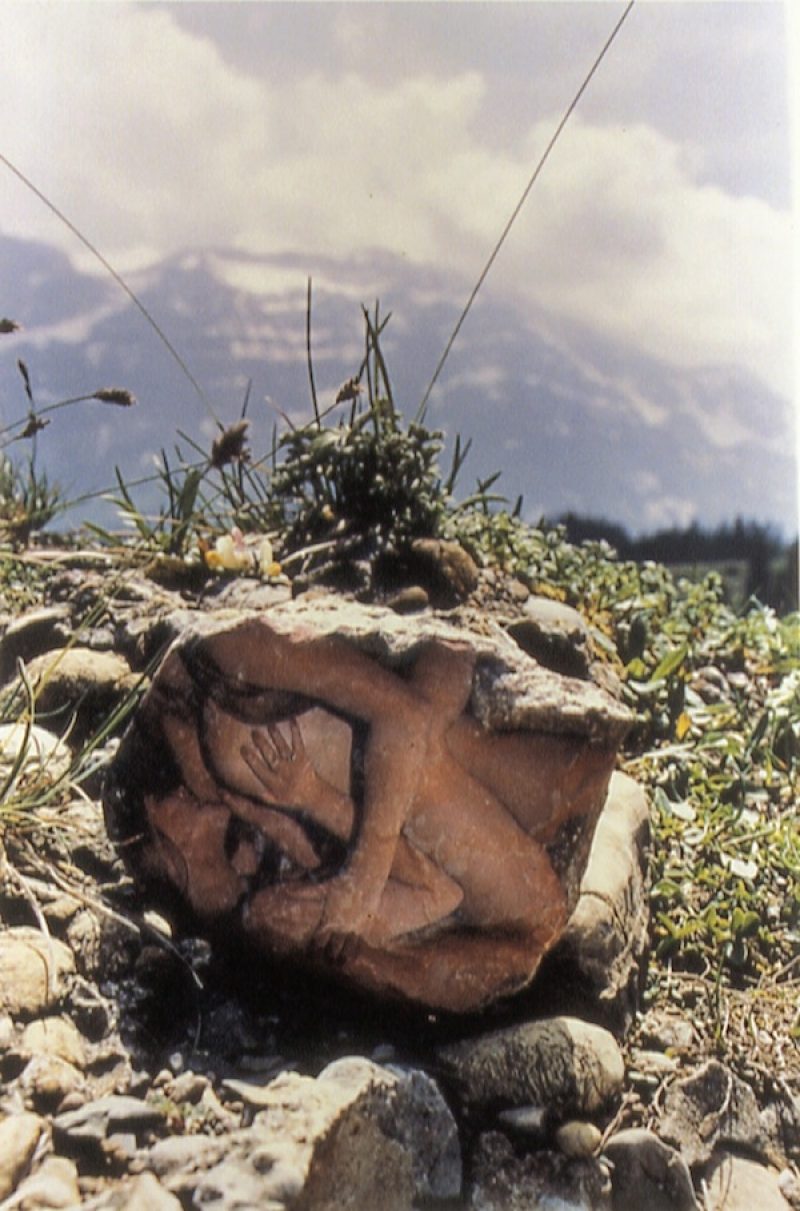 JM Fairly wholesome … on the face of it.

JM What began as a joke became an ongoing investigation. Did your first work in this vein include rocks from the trout stream?

AR Yes. I took the same rocks and photographed them in the stream, in the woods and imbedded with other rocks around the house. Believe it or not, I had never taken photos before. The rocks looked great in the landscape, so I just shot a lot. Then I realized there wasn’t any film in the camera. Next, you had to load the film for me. That was my first photo lesson. 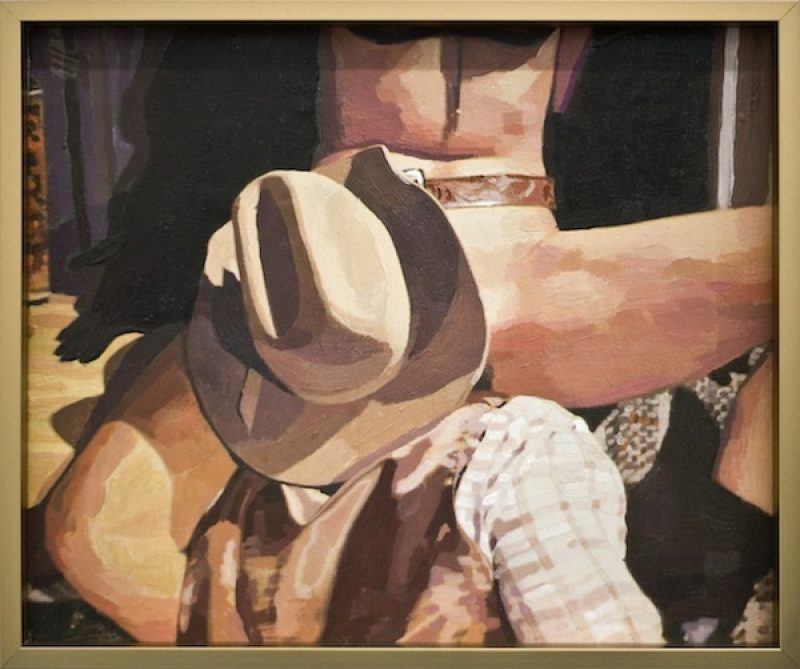 AR I began with a rule that I would put the rocks only into existing settings, but before long I started bringing them indoors and arranging them in various configurations—first in circles.

JM In some ways, your photos parallel Robert Smithson’s mirror displacement series—and the sculpture, his non-sites. Smithson, however, considered his outdoor arrangements of mirrors as sculpture and the photos he shot of them as documentation. Yet, like him, you used a set of objects that appears in different locations in different arrangements. Smithson saw the mirror as a cut into the landscape. In contrast, your photos are a kind of re-photography. The clippings, however, look less like photographic appropriation than they do like displaced figures and body parts that merge into a generalized “photo reality.” They have a sense of actualization rather than montage. Did you make any outdoor sculpture?

AR Yes. Once I added a selection of orgasmic faces to a pile of rocks being used for repairs in Berlin’s Alexanderplatz U-Bahn station. Another time, I put a circle of rocks covered with penetration photos in front of Berlin’s Kunstlerhaus Bethanien. In this piece, I liked the way the penetrations spiraled into the ground. I regard the rocks as a kind of ready-made figurative sculpture. I would try to match the contours of the photographed body to the form of the rock. They could be seen as part of a sculptural tradition that equates stone with flesh, one that goes back to prehistoric Venus figurines. But I considered my photos as works, too.

JM What’s the difference between looking at the rocks firsthand and looking at photographs of them? 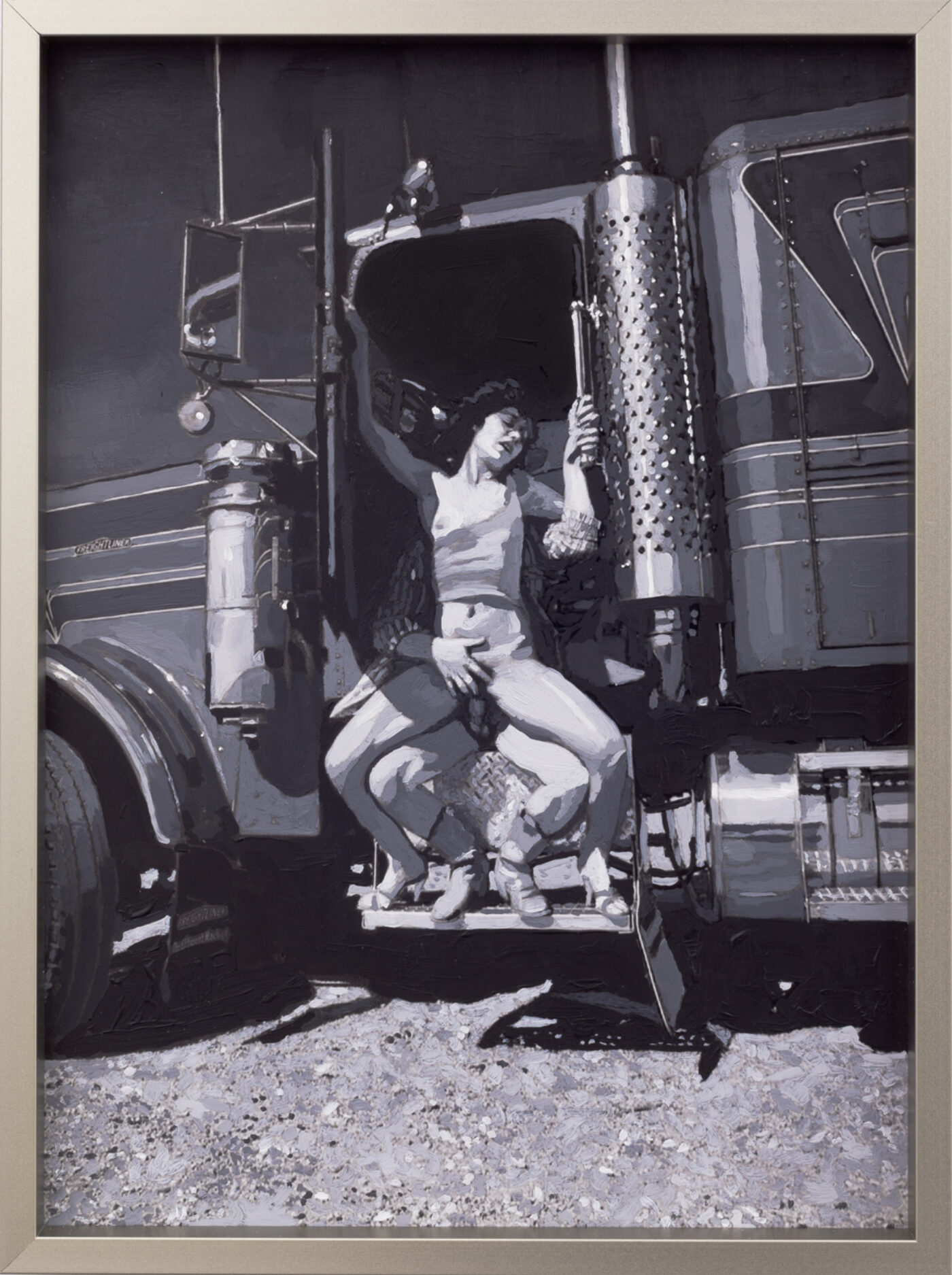 AR I tried to give both the rocks and the paintings on porn a skin. Skin is the organ of touch, so it adds something sensual to the pleasure of looking. In the paintings I try to mimic the underlying photograph as closely as possible. By painting just enough to transform the image, I want to undermine conventional, overly rhetorical notions of painting skill. This renders the optical screen of the photograph into something that is also tactile. The transformation could be seen as a mirroring of the body itself. It contrasts with kinds of feminism that reject pornography and visual pleasure. 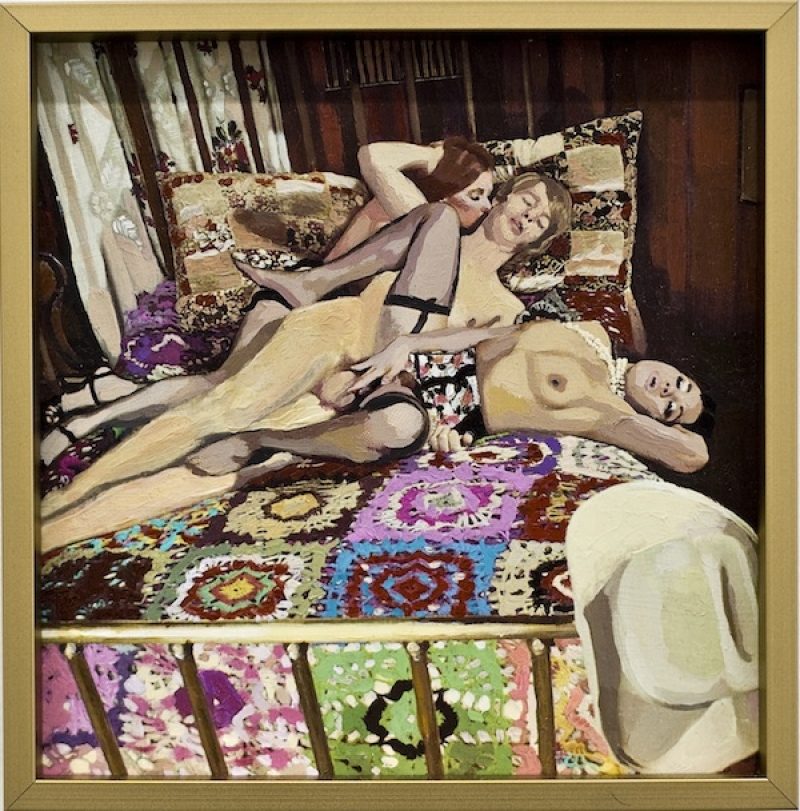 JM Conventionally—and I guess by that I mean through the lens of the 1980s culture wars—porn has come to stand for transgression, particularly in art world terms. Here, you seem relatively indifferent to the “bad girl” stance that arose from pro-porn feminism—which is funny when I recall what happened when you were working as a graphic designer at Lear’s magazine.

AR Lear’s was a magazine for older women, published by Francis Lear, who had divorced Norman Lear shortly before founding it. One of the editors was John Stoltenberg who, unbeknownst to me, was married to Andrea Dworkin and had founded “The Pose Workshop” where men reenacted the positions women took in porn photos. This was supposed to teach them about the sexual degradation of women. During my lunch hour I’d photocopy images for the rocks to enlarge and distort their proportions. One day, I was running out a gigantic, stretched penis. While my back was turned, Stoltenberg had entered the room. I looked behind me and saw him. He was almost transfixed by the penis emerging from the copier. Without a word, he spun on his heels and left. 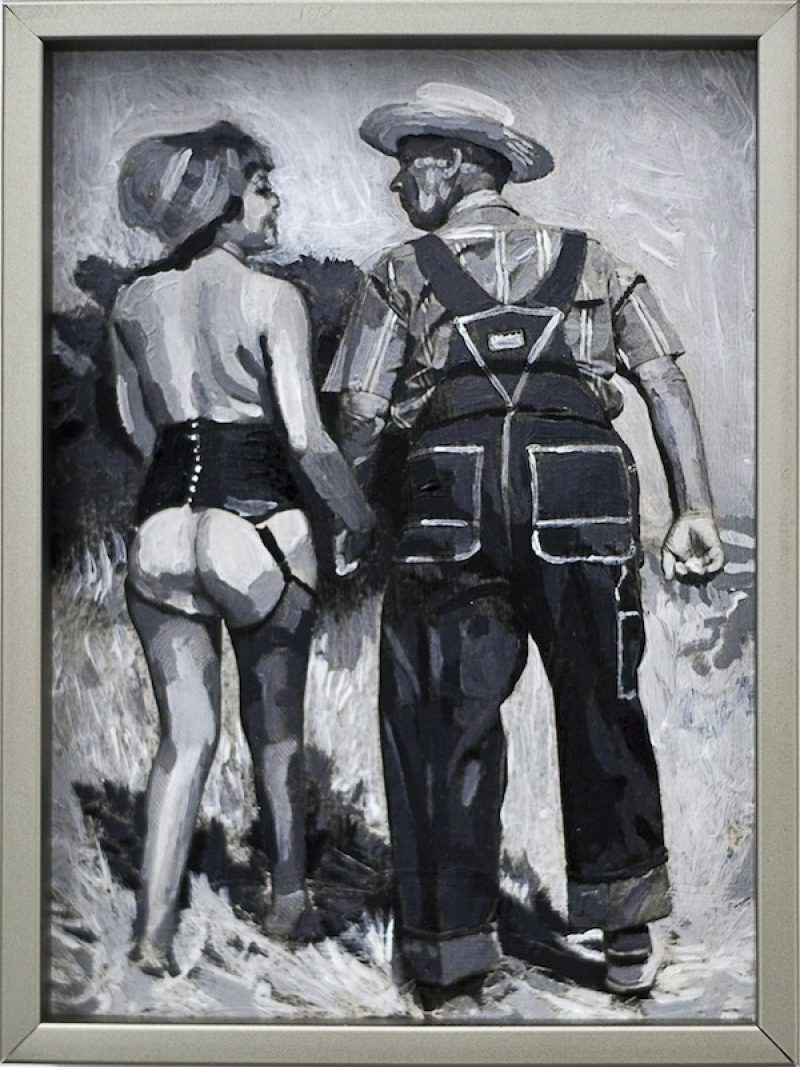 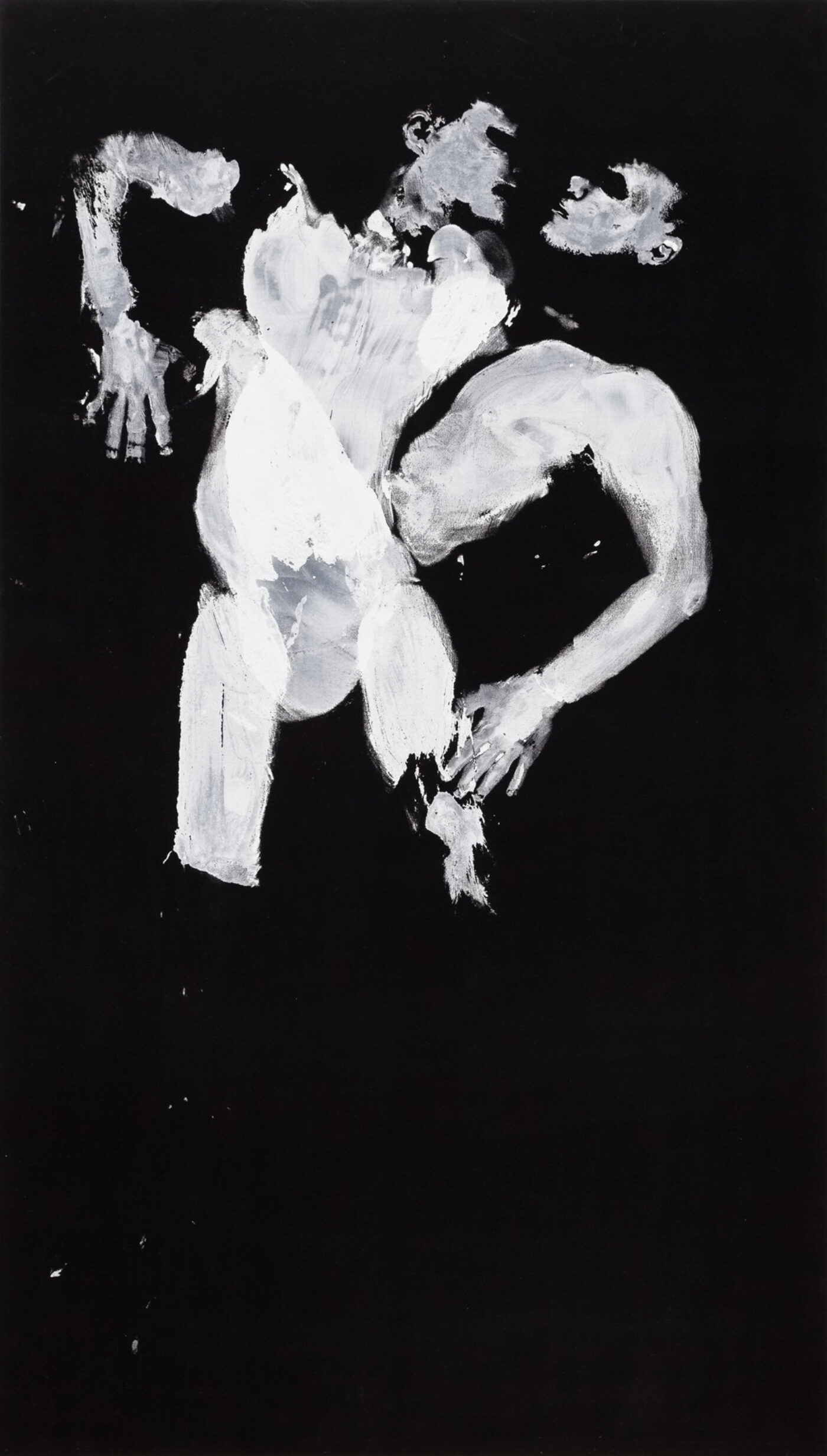 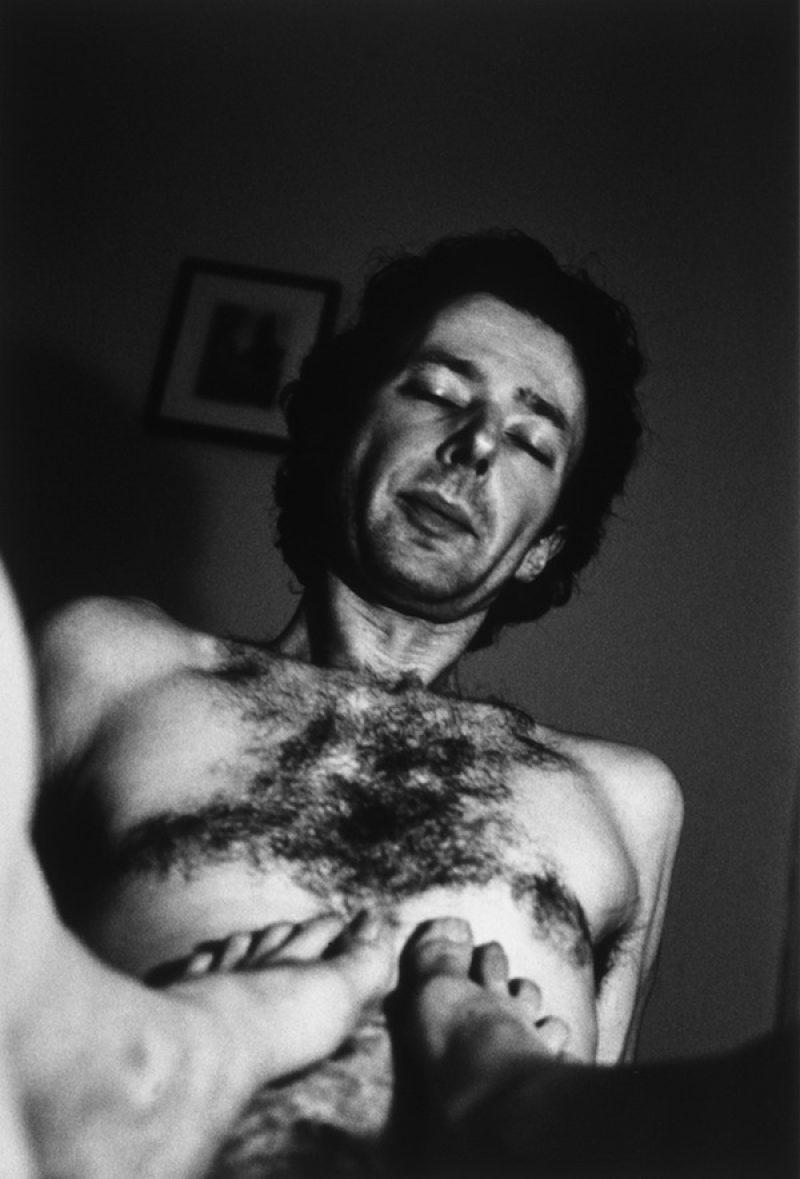 JM Is that why you wanted to use them again?

JM What’s so special about the Golden Age?

AR That’s when pornography went mainstream. In part, this had to do with the sexual revolution of the sixties, feminism and black liberation. The end of the Golden Age corresponds with the outbreak of AIDS. 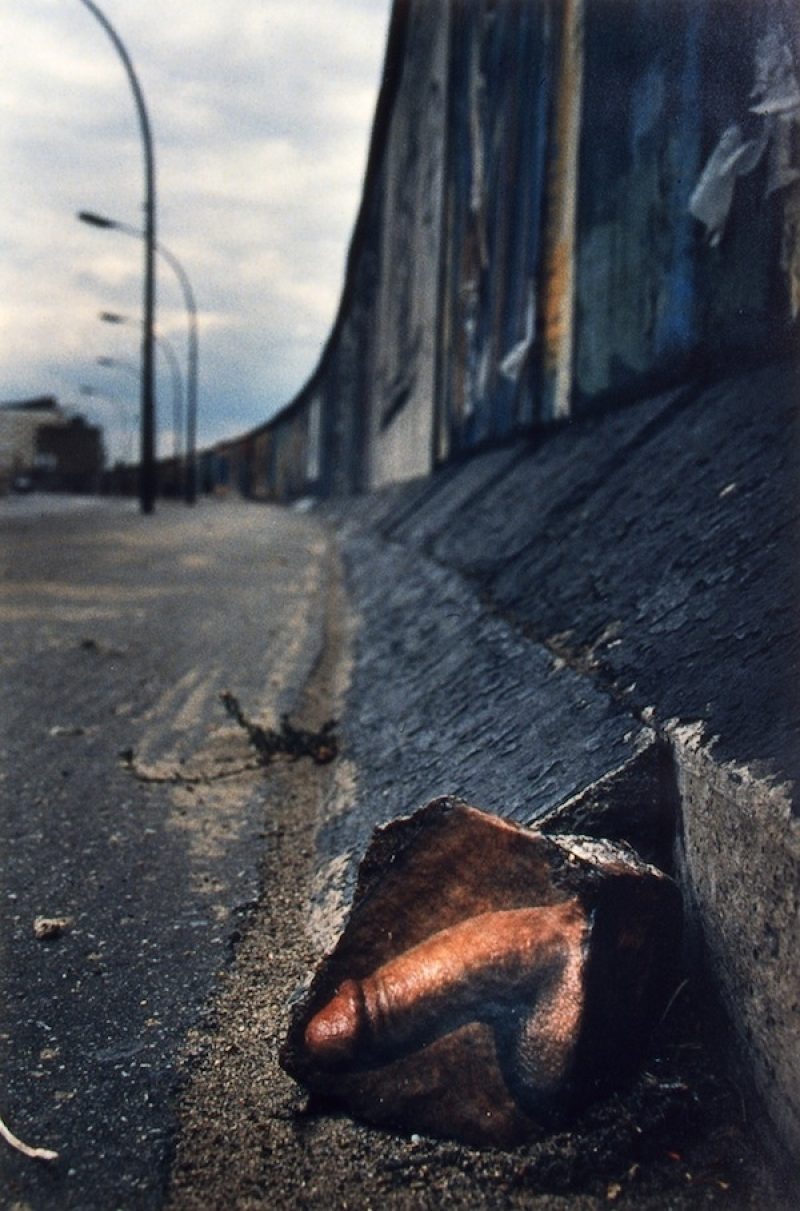 JM So we might characterize the Golden Age as a blip when people felt free to experiment with a relative absence of guilt or fear, a period both sexualized yet innocent.

AR Obviously, the very idea of what was once called “free love” flies in the face of this reality. Look at the coyness of Sex and the City. We were shocked recently to hear that some participants at an HIV/AIDS conference in Berlin were arguing for the right to keep their illness a secret from sexual partners because telling them supposedly destroys the romance. 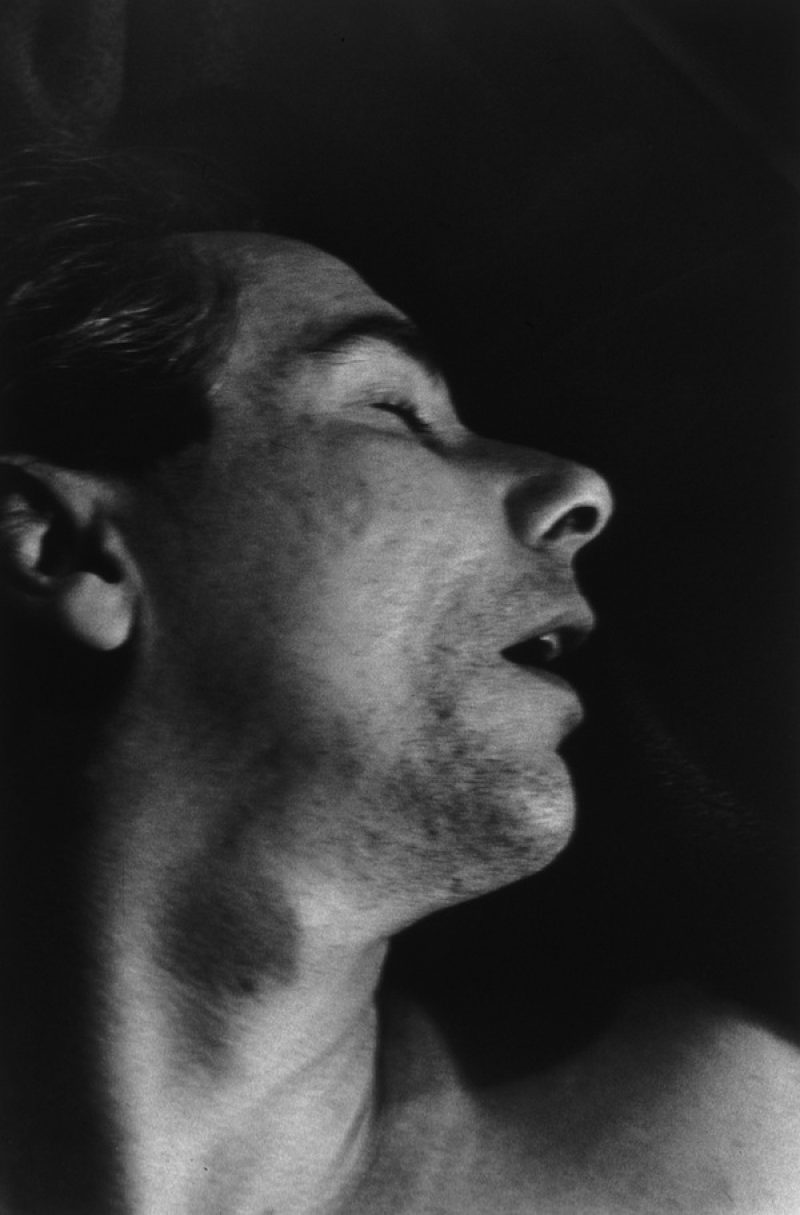 JM It was a literally obscene scenario because “obscene” refers to what’s offstage, not in the scene. There was the movie screen flanked by stage curtains, showing twenty minutes of ads before the feature, and there was the audience, each individual in his or her own virtual space. To me, our present condition has less to do with proliferating amateur porn than it does technological objectification.
The British anthropologist, Mary Douglas, famously defined “dirt” as matter out of place. I think contemporary culture is moving in the direction of a “porntopia” that is not just virtual, but more importantly placeless—everywhere and nowhere. 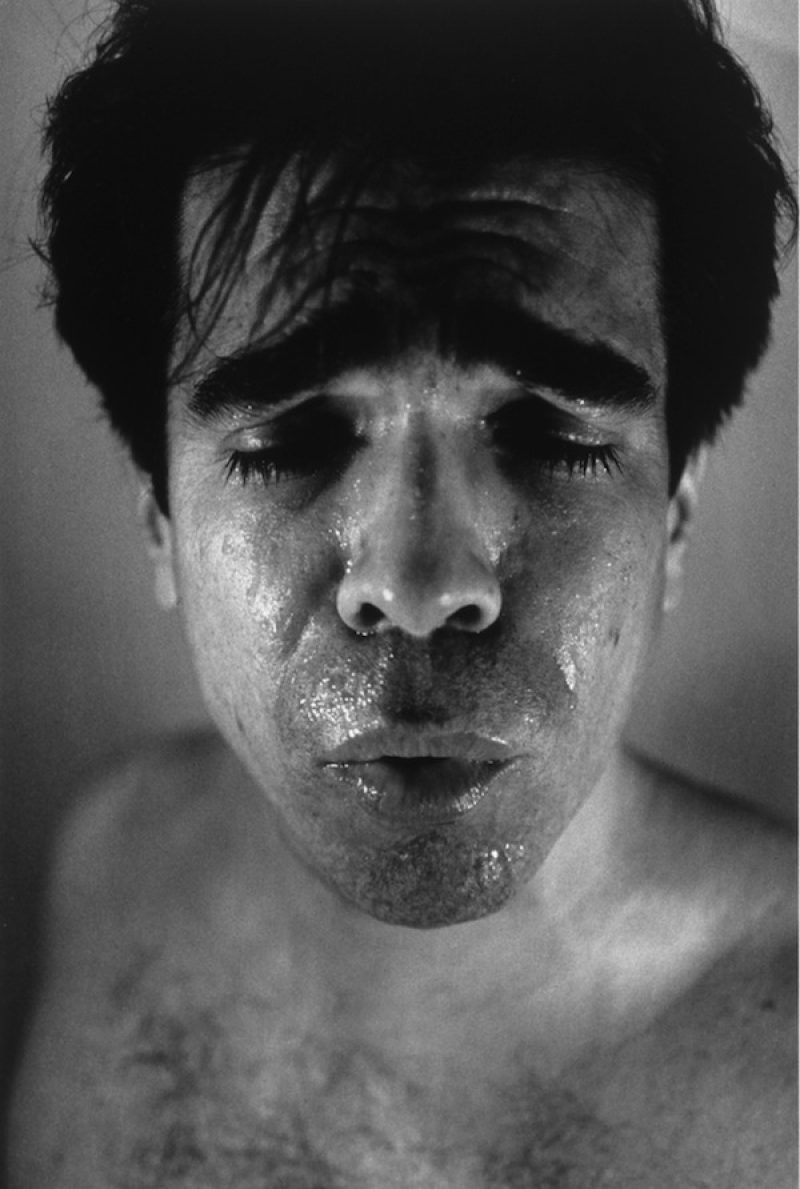 JM While many of the photos in the book became popular—Mike Kelley’s, Jim Shaw’s, Tony Oursler’s and Cary Leibowitz’s—the one you shot of me never did. Nobody wanted it! And I hasten to add that I wasn’t acting. But my favorites are the Mike Smith portraits, especially because a Swedish AIDS-activist group used them for a safe-sex campaign. They made T-shirts with pictures of Mike and the slogan “Come in a condom.”

AR When the Swedish Federation for Gay and Lesbian Rights asked if they could use my photos, I was flattered. They thought their campaign would be more effective if it linked caution to pleasure. And they contacted me was because there aren’t many photographs of orgasmic men around. We see lots of ecstatic women, but men are always in control—in mainstream media too. That’s why Head Shots is only men. Shooting those pictures brought up a range of emotions for me and my models. I realized that sexual exchanges can happen through the lens of a camera. But, we also laughed a lot.

JM That’s a reversal of the obscene: the face instead of a penis!

Aura Rosenberg lives and works in New York. Her latest exhibition, I Know It When I See It, is showing at Martos Gallery through March 30th.

John Miller is an artist living in New York. Read his conversation with Liam Gillick in BOMB 118 here.