At Night by David Ryan

He sits there and regards the waitress, wondering what she would think if she knew he occasionally followed her home; if she knew about the Window Trick; if she knew how her breath sometimes sped in the dark; how once he touched her sleeping throat and her back arched, or how she then rolled over. And what if she woke and saw him, his silhouette stiff against the wall lit by moon and perhaps a streetlight spilt in against his shadow; what if she heard his breath on her ear, discovered an estranged print of his foot, a piece of cast mud, a matted leaf or a fresh stain on the floor? He reviews the list repeatedly and his coffee chills.

She belched in her sleep once.

How many times had he imagined her on the bearskin ruin the pamphlet?

Through the window, across the street, a woman talks into a pay phone. He squints with the sun, he squints without it too. He feels this gives him away; it displays his attempt to conceal his weaknesses.

He believes she does not see him, does not notice his deep-set eyes, the flaps of skin wrinkled around them. He is young for such old eyes.

His coffee is weak as tea.

Summer brings out the cleft at the base of their calves, tanned skin shaved smooth—a few razor-scrapes, or a nick—to the mid-thigh, droplets of perspiration clinging to the down above. The woman at the pay phone waves her free hand against the sun impatiently. The other hand clutches the phone to the side of her mouth. He imagines a chance conversation. He catches himself moments later speaking to the empty chair that faces him. As if to reconcile his indiscretion, he lines a bubble in the window glass, positions it to her ankle, then rides his eye up along her leg.

In the autumn, they bundle up. There comes a time during the course of a day where they must bundle down, the cold comforter slipping up, softly, caressing their prickly goose-pimpled thighs. Outside, the dry, morning smell of cedar and orange leaves rises from the chill. Winter conjured the bearskin rug from the pamphlet he keeps in his top drawer. The fur, matted and stained in the center, glows white from the sun and blue snowdrifts that shine through the window. He imagines large umbrella flash-lamps set outside the photograph that add to the artifice of a snow-lit day in the pamphlet’s room. The glossy cover tells him to Ski Colorado. In the pamphlet, Colorado is a mountain two inches tall. The skin rug on the back flap appears larger than the mountain on the front.

In the spring, everything was wet and animals copulated.

In the summer, the dew dried. The sun burned it off by a certain hour in the morning.

He grins until the waitress spoils it, catches him with his teeth showing, asks if he would like to pay now seeing as—she waves her hand over to a party of people who wait by the door—they want to sit and your coffee’s been long going. If you don’t mind. She is too aggressive awake. A cheap bracelet shakes on her wrist. He wishes he could take one of the metal charms from it, touch it to his mouth and suck. He has seen her take it off her wrist before she retires, though only now has he found pleasure in his mouth from the idea.

“A minute,” he says. He wants to say, I know how you sleep. A minute and a glance suffice, however. He is the center of that glance, the implications of it. In her unwitting world, he is God.

She walks off to the Future Table of Those Who Will Be Served with her hands raised shrug-level.

This was especially true in the summer. It was warm anyhow, the sky lit differently from the other seasons; film covered the air like a moist tarp.

The coffee shop he sits in is air-conditioned. No sound comes from the unit, however. Just the sounds of spoons and conversation. With his eyes closed, it sounds to him as if the spoons are talking. He imagines the street outside burning up. Back to the woman at the phone: A grate outside shoots hot air up under her dress, ballooning it up, her long legs rising, lengthening … . To watch them struggle, their free hand no longer waving off the sun but pushing into the thin, flowered fabric, trying to hold the dress down while their legs grow long underneath. Oh, to watch them blush like that all day. Her hand still crimped down against her brown leg; the back of her thigh turned toward him. Tomorrow the phone she holds in her hand will look like the black box they remove from the charred chips of airplanes. It will leave its coke all over fingers. It will stain pants, shirts, fingertips and the gaze of eyes. Bricks will hold the smoke splattered over them like shadows.

He crushes a dollar and sets it on the table. He passes the Future Table, gives them a thumb’s up, then churns his middle finger from it like sleight-of-hand. He laughs out loud at that, then pushes the door open into the hot sun. He stops in the heat as though he has forgotten what he is doing, or where he is going. He conjures purpose in these brief lapses. He leans against the wall of the coffee shop, across the street and squints at her again, bolder this time because he is in the open air. The train underground did it, caused the wind to push their skirts up through the grate like that. He reaches up and sniffs his finger; it smells like sulfur, like the safety matches he keeps in his pocket. The irony in the words safety and matches makes him think. He squints and laughs. He attracts attention this way; he forgets, then remembers, he was put on this earth for everyone to see, like the gutted cat in the science class from years ago that wore the glass tube full of the honey-colored liquid. He occasionally forgot they could see him, like the time he was very small and first realized he was not invisible. Dirty trick.

Tomorrow, those hands will blacken if they touch that phone. A crowd will gather and know how it is: It was his way of being invisible.

His erection softens; she has hung the phone on its cradle.

She walks away, her skirt now settled against her sides, pushed by the wind slightly so that a long vertical dip has formed between her legs.

In that science class, he had thrown the lit alcohol burner down, and said it was an accident as students scattered and the flames spread around his feet like a burst water balloon. It was a beautiful gush, blue and pure, scalding hot. It burned off the alcohol, then left a mark in the linoleum that said Walter did it.

The rest of the school year he sat next to his teacher up front, facing the class. He could look inside the girls’ skirts, sitting up there like that, but instead stared right through them at the cat floating frozen at the back of the room: mouth open, caught with its guts hanging down in the anemic yellow liquid, dangling like a skin brassiere from a clothesline … or how he yelled timber from his bed with his little voice as smoke filled the stair- well and how he climbed out of the comforter and how the beam from the attic came down sparking the banister and how he saw his mother, saw her mouth freeze open, heard her shriek between the ash and smoke that cloaked her like static-charged laundry. Cinders were floating like snowflakes … or how when he opened the window, a ball of heat rushed at him and left his arms bubbled under gauze for weeks. “One fried little peanut,” he heard whispered from the hall as he danced in a big circle flames consuming his childhood, his family; yes, his, he supposes, though at times nothing is clear. They went up like paper boats in the winter, when the wood was peeling from itself and dry; they went up like origami swans dangled over a candle.

He runs his tongue across his lips. He watches the big eye in front of him blinking. He squats and scratches his back against a brick wall. He kills time until nightfall. He buys a soft drink. He circles a city block several times. He finds a shoe in a gutter and ties it to his belt. He spits twice.

With night fallen, he can get down to it. Certain nights he must wait for hours until the right moment. But he can be very patient. He can persuade time at her apartment window, or—once she falls asleep—he can climb inside with the Window Trick and listen to her breathe. He could count the stars and wait for them to fall if he wanted, but he does not do this. He stuffs the rag inside the jar, instead. Clots of the remnant mayonnaise bob suspended in the gasoline. He screws the lid on and pulls a strip of cloth through the hole he has punched, forming a wet wick. A little gasoline leaks onto his scarred hand. It feels cool in the night air. He will sit still and wait in the dark for the right moment. He tilts the jar upside down and drizzles more gasoline on the scars. It feels good. The smell comforts him. Tomorrow the building that holds the pay phone will not be a building, only a pile of abscessed sticks and brick.

He climbs the wooden steps that lead to the small porch under her window. At the top, he sees his face clearly in the shiny dark of the glass. He tricks the window and steps inside. Her nose is snoring. Her mouth has filled the room with breath. He picks up the bracelet from the night table and touches a charm onto his tongue. He stands and listens to her breathe.

—David Ryan is a writer living in New York. This is his first publication.

I love the shiny, pristine teeth that most Americans keep behind their lips, pearly immaculate rows of ivory, often capped in precious metals, brilliant they seem and impervious to decay, and their children’s teeth, wrapped in steel for years so they too, will grow in straight and flawless.

A Young Girl by Hunter Drohojowska 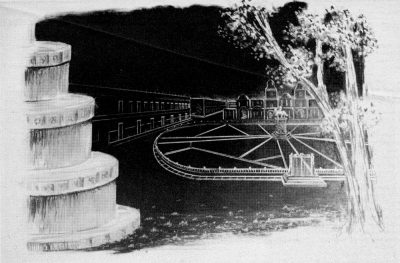 He hooked the nail of his middle finger between his lower teeth and peeled off a sliver.