Artwork that complexifies the notion of authorship. 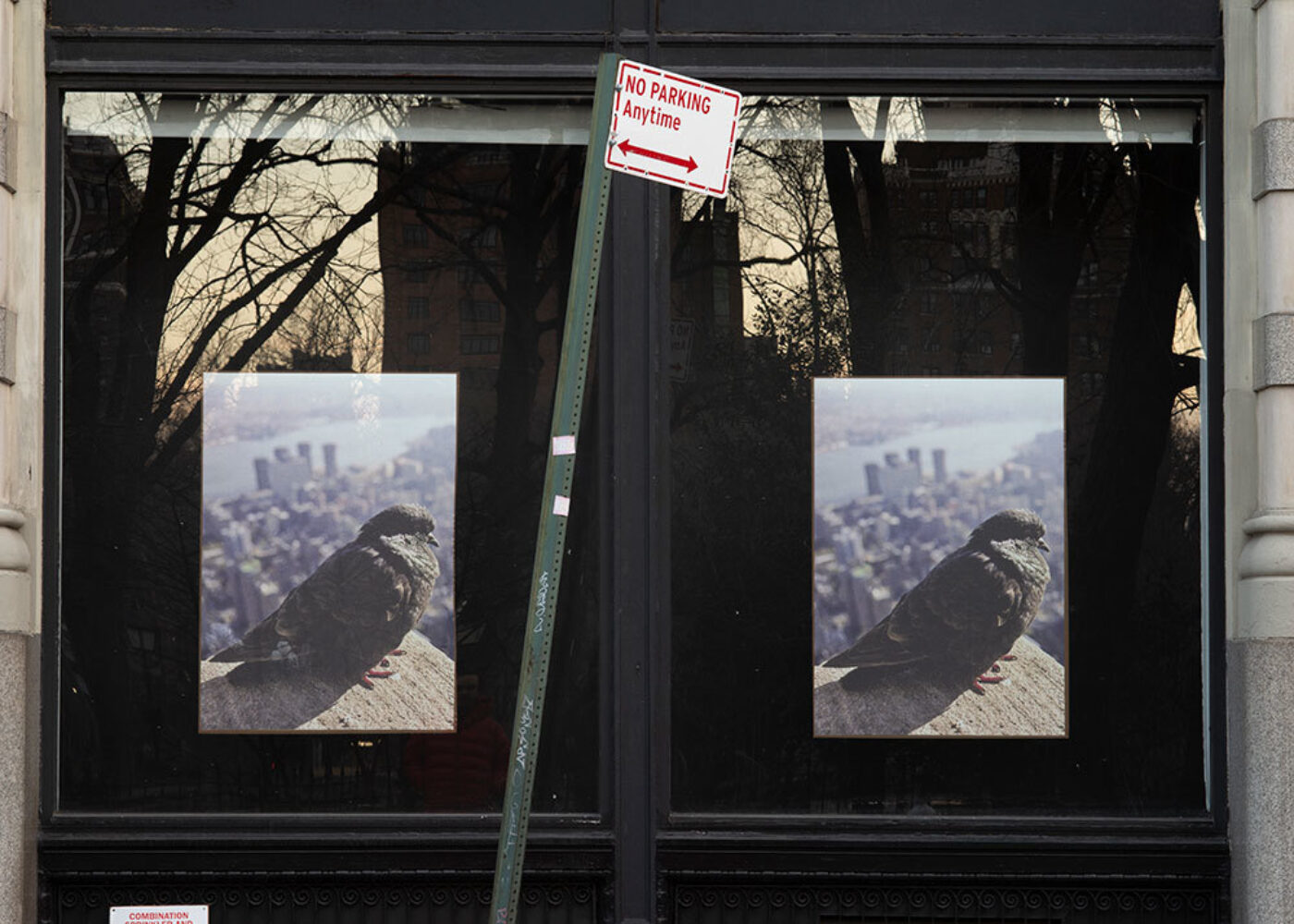 Jason Hirata’s critical practice emerges from a studied approach to the contours of his friendships and jobs, the light in the room, and the food on the menu. He was recently called a “slacker” in the New York Times, and there is a certain accuracy in the recognition of his simple gestures’ obstinate relation to conventions of productivity.

Before we met, I saw a show he made by writing the names of different foods on construction paper with Sharpie. For a lecture I commissioned from him for the Center for Experimental Lectures, he performed a durational reading of every dish served at every meal for one week at the concentration camp in Puyallup, Washington, where his grandparents were interned during World War II. We started working together because we like to eat, and pleasure, along with form, care, precarity, work, and reproduction, are the subjects of his practice.

Joseph Lubitz In recent solo exhibitions, you have shown works by other artists as well as non-artworks by other people that you had a hand in producing. Some have read this as an acerbic critique of authorship, but I also see this way of working as a representation of your position and practice as a set of professional relationships, dependencies, citations, friendships—

Jason Hirata —which are all things that authorship requires, and bodies require, and people require.

I think I am more interested in experimenting within its conditions than criticizing authorship itself. It was Carissa Rodriguez, whose work I am showing at 80WSE, who taught me that: that I am authoring something by doing this. She showed me that even when a show of mine contains zero works authored by me, this is not an evacuation of my authorship. I think critical practice is mostly self-critique. So, a goal of this work is to find the authorship in what I am doing and to propose finding the authorship in what your assistant is doing, or what the registrar is doing, or the make-up artist, or the staff. The artwork for me is in the structure and not the object. It’s a conveyance of a feeling through a number of supporters, participants, and circumstances.

JL I’ve been thinking about some of your other gestures in these shows, like the image of a pigeon perched on the cornice of a building high above an out-of-focus Manhattan, which you have printed twice at poster size and taped side by side in the window of 80WSE.

JH The pigeon image comes from a postcard that fell from a vendor near 80WSE at Lucas Quigley’s feet one day during a windstorm. The works in the windows allude to a series of posters that Lucas and Levi Easterbrooks help me make. You are seeing what is almost a poster for that body of work. 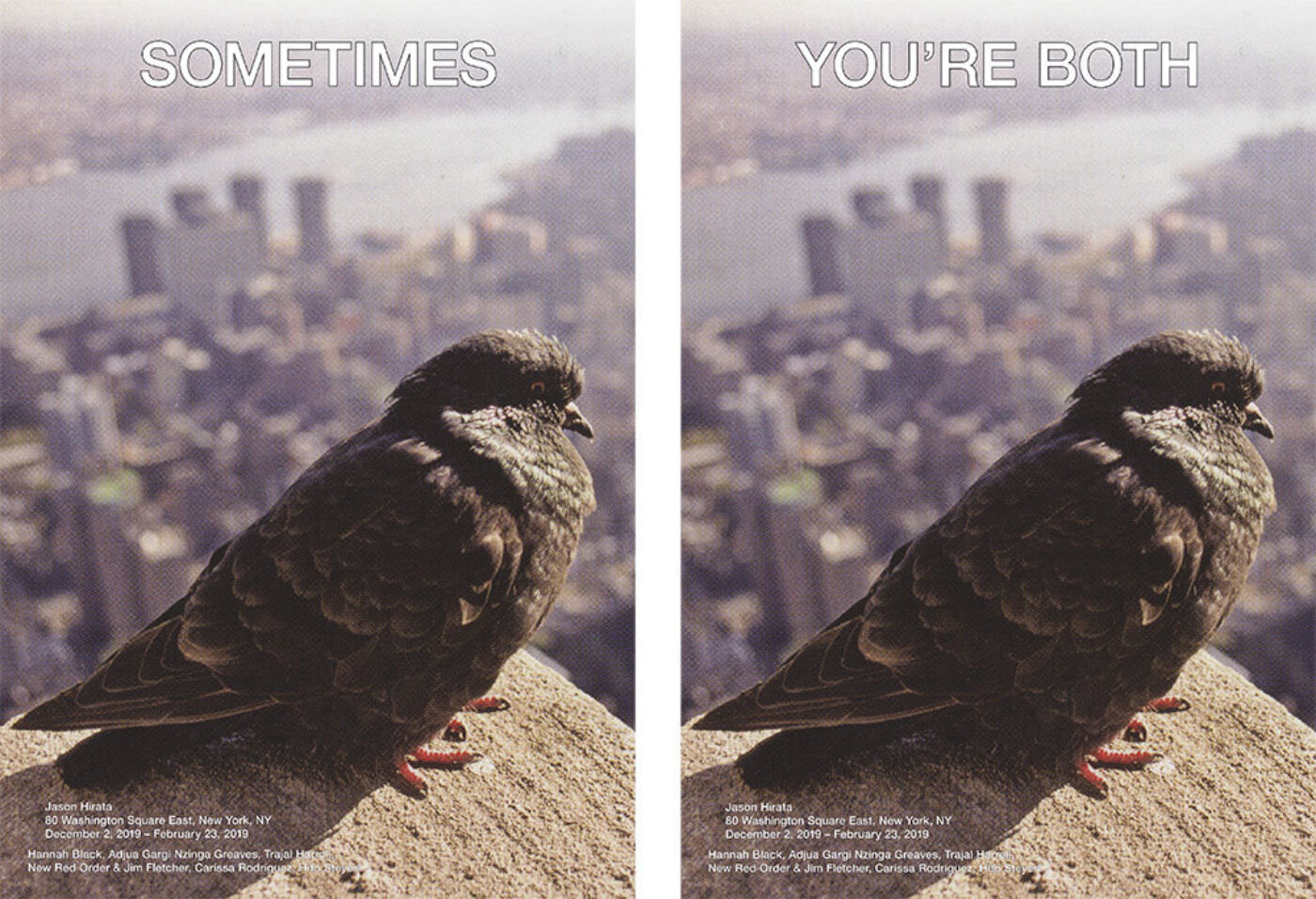 JL Something other than the original, or the final, is on view. I see the doubling as a formal analogy for the way you show other people’s work.  The pigeon, like the works on view at 80WSE, gains a particular meaning through its repetition.

JH The display of artworks is always a negotiation, even when that is obscured. Every time the poster series gets reproduced, it’s a unique situation. A version is shown at one place, and it’s different the next time it’s shown. Not only because everywhere I participate in an exhibition an additional poster is produced from a postcard, but because that space and that organization of people will have a different need for the posters. Kunstverein Nürnberg sold the poster series in its yearly fundraising as a set, because that’s how they imagined people would buy them. For my show at Veronica in Seattle, they sold them as unique prints. At Christian Anderson in Copenhagen, they were a single unique edition comprised of four prints, two of each poster from that show. They are always one hundred percent what the space needs. The window of 80WSE is a space that needs to represent what is going on in the programming of the gallery, or needs to be programming itself.

When I say that the display of artworks is always a negotiation, even when obscured, I mean that there are always a number of outside factors at play, whether they are acknowledged or not. For instance, when we listen to music, it is never in a total vacuum of sound; there is always the sound of your surroundings, the equipment it’s coming through or made with, and the sound of yourself breathing.

JL This compromised situation of listening is also a formal device in your exhibition at 80WSE: you stream the audio of various videos on view into two of the middle rooms, where it is mixed and has its own life as noise. One of the rooms is lit by the default screensaver of the Apple computer that, I assume, controls the mixing and sending of the audio. Just showing the works together, they interact. So why do you perform this technical operation, an intervention and gesture not used in your earlier exhibition at Kunstverein Nürnberg?

JH It’s a way of being literal. By technically mixing the sounds that are already passively mixing in space, I think it produces a situation where that mixture is acknowledged in a way that I haven’t been able to achieve before. It shows that I am presenting a single coherent experience of these works. Also, the structure of presenting these multiple videos as one coherent experience at 80WSE was a curatorial proposal that came from the institution.

There is one project here in these two shows, but there was also a group show at Kunsthalle Fribourg where I got to try this for the first time with Jason Loebs’s work. In addition to his hosting the premise with his art and employing me as his assistant, he really theorized the beginning of the project with me. 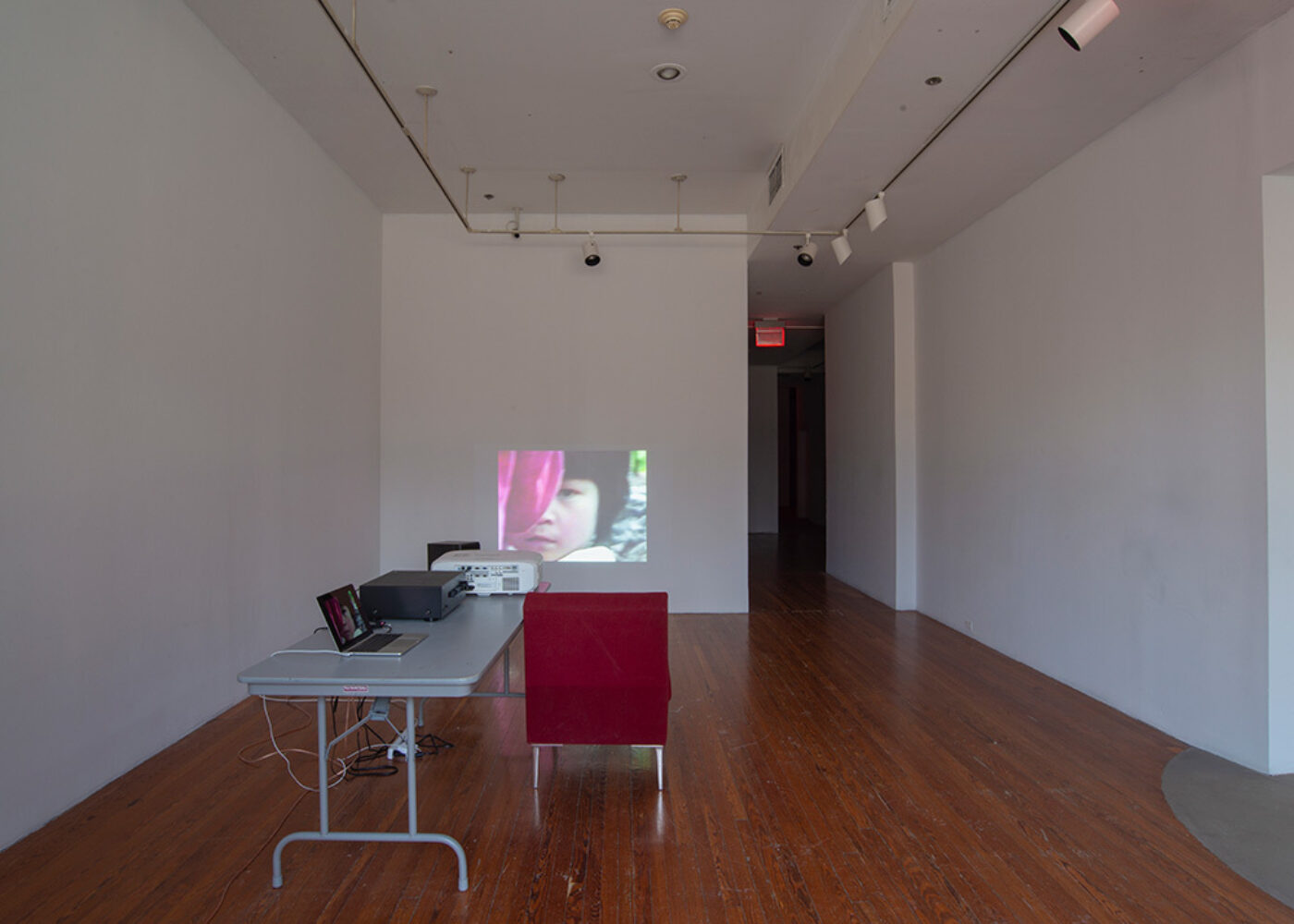 JS Do you feel that my questions now are related to your questions about the work at that time?

JH No, completely different, because that was a conversation between Loebs and myself about the emotional and psychological experience of making his work together as codependents. We were discussing what it would mean to perform a reversal of power dynamics and psychologies. At 80WSE the conversation has been primarily between me and the people that run that space. The differences come mostly through the people involved, so this project will always present differently.

While I don’t think artists are all a certain way, I do think the work often gets asked to do a similar thing: to relate to the world through the commodity form or through objects. There is a lot more to art, and a lot more to life, than objects. Because I am trying to work directly with that structure, I’m rarely sure these days if the art I make is actually visible within the fields of art.

I hadn’t really worked for a lot of artists until I moved to New York, which is when I started to help provide some of the reproductive ground that new artwork needs. I was watching art, and it was amazing. I was actually watching it emerge and listening to artists caring for that emergence.

JL There is an echo of that in Carissa’s and others’ critique of the art historical fascination with the newborn and caring for the newborn, of originality.

JH Which is a critique of the newborn within patrilinear discourse. Forms of exchange want objects to be indifferent, but I want to maintain the connection to the conditions that produce them. In early accounts of the readymade that I have read, it’s there. It’s as if we figured out how to take these objects people encountered, to enclose them and turn them blank, as if they weren’t already authorially inhabited. Like André Breton’s slipper-spoon thing. He finds this slipper that looks like a spoon, or is it a spoon that looks like a slipper? He finds it in a flea market, and it becomes his found object. But it was clearly something that was made by hand by somebody unknown to him, someone outside of his encounter with that evidence of a creative subjectivity. 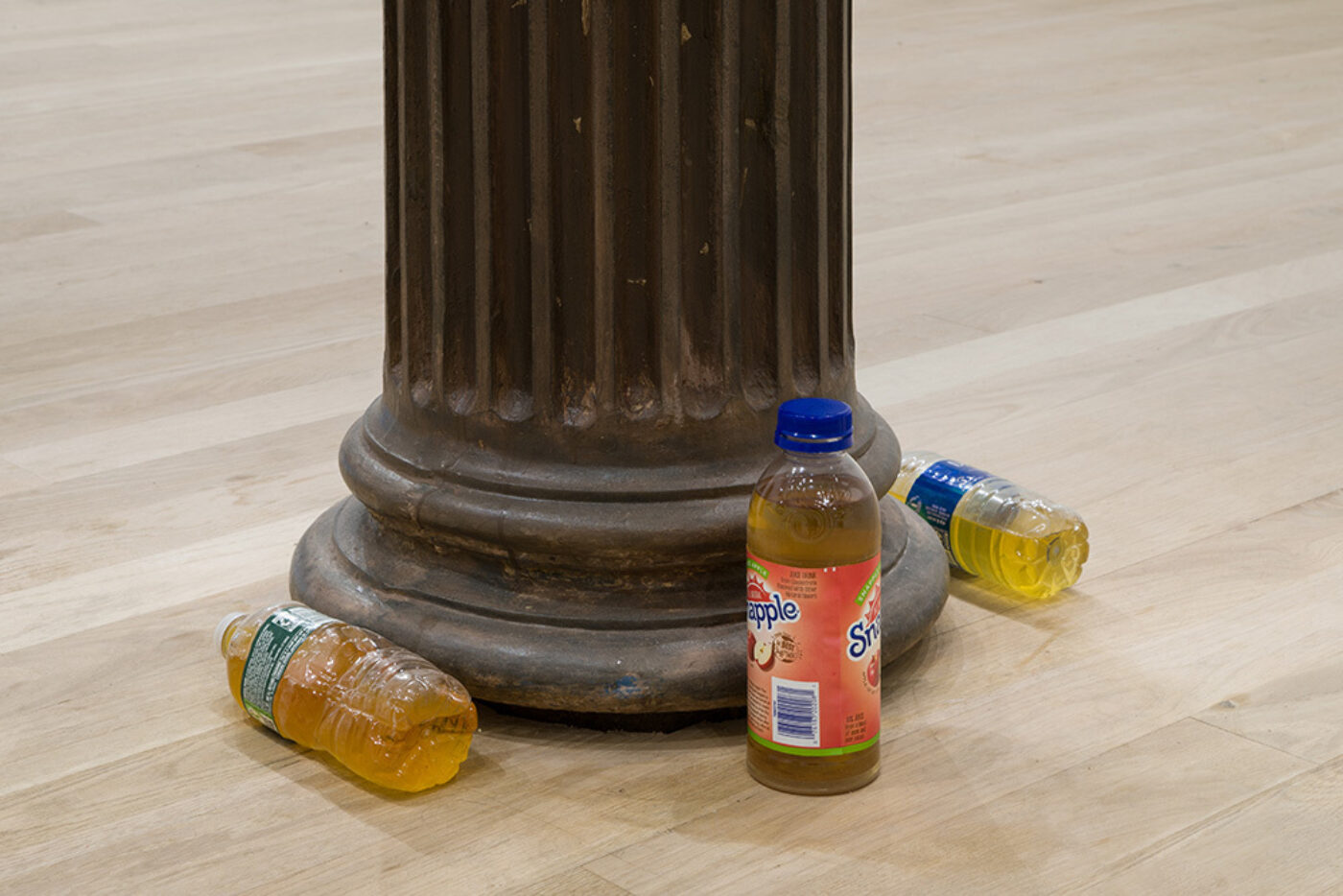 JL Do you feel like the piss bottles you recently exhibited at Artists Space are your spoon-slipper?

JH The piss bottles and projectors that were at Artists Space are finished works when they are returned. The show opened in 2019, but all the works are dated 2020, so the actual artwork is the loan, as well as the momentary handling of the object, its momentary keeping, and finally its return. The projectors go back to 80WSE, and the piss bottles are returned to the street. I didn’t want their transplantation to be permanent. They are my spoon-slipper!

JL Do you always return them?

JH I usually get them just to look at them and then throw them out. I’m always really worried about them because I hear how they explode, and they might spill. The seal might not be good on them. I have proposed this artwork to people outside the US and have been told that they don’t exist there. Maybe at some point I’ll try to show them in a place where I’m told they don’t exist. Showing them there would entail finding them there, then returning them to where they were found. Anywhere where there are people and bottles, there is the potential for pee in a bottle.

Jason Hirata: Sometimes You’re Both is on view at 80WSE in New York City until February 23.

Joseph Lubitz is a curator and writer in Brooklyn. He is the co-director of the Center for Experimental Lectures. Recent projects include the California Ideology Reading Group at Wendy’s Subway, and the exhibitions Bangalore Flat at Home Sweet Home, Bangalore; and Omnipresence at The Kitchen in New York City as a Helena Rubinstein Curatorial Fellow in the Whitney Independent Study Program. 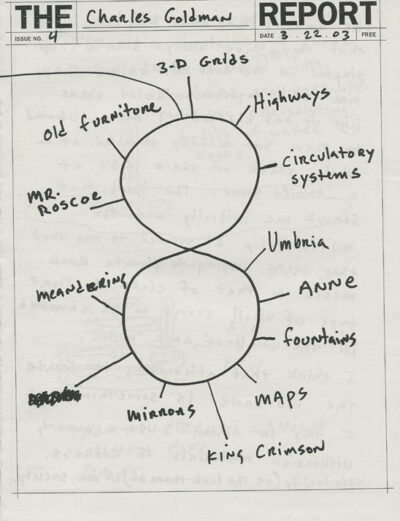 We generally expect our artists to be more interesting people than those from other walks of life, and we reward them for their special abilities to help the rest of us find complexity of meaning, beauty and even grandeur in the world around us.

Even though—or perhaps because—it’s such a small country, Lebanon has been swept up in a number of major geopolitical encounters over the past 200 years.