Alexis Georgopoulos’ work as ARP is based in a tradition of experimental electronic music, while remaining sui generis. Watch an interview and performance.

ARP’s new album, The Soft Wave, out now on Smalltown Supersound, is a suite of tranquil, and at times noisy, electro-acoustic meditations. The softly percolating analog synthesizers and repetitive guitar lines are all played by Alexis Georgopoulos, the man behind ARP, and reference both the Teutonic tropicalism of Cluster and the deep drone of the Taj Majal Travelers. Georgopoulos’ music is more than the sum of his influences however: The Soft Wave stands on its own as work of electronic music that resists genre categorization.

A former member of the San Francisco band Tussle, Georgopoulos’ released his solo debut as ARP, In Light, in 2007. He is also a prolific collaborator, working with Tarentel’s Jefre Cantu-Ledesma and Scott Hewiker as The Alps and with Quinn Luke in the more dance-oriented Q&A.

BOMBsessions sat down with the transplanted San Franciscan in his Chelsea apartment and then caught his live performance at Coco 66 in Brooklyn in early September. 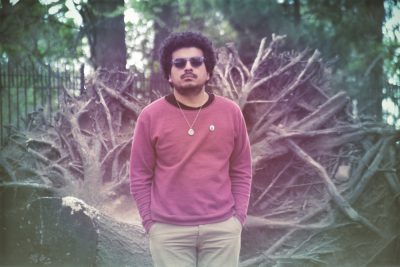 Universal languages, performing in a trance, and the benefits of losing your work.