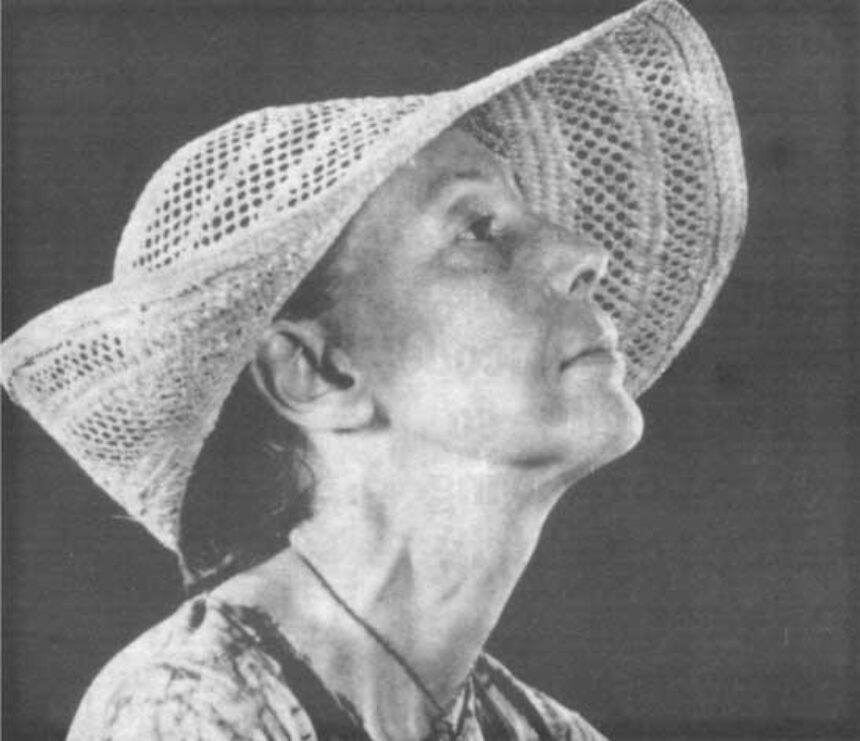 The following interviews with Griselda Gambaro and Angélica Gorodischer took place in Argentina in 1989. Several weeks before my arrival—October 9, to be exact—President Carlos Menem pardoned all military officers facing trial for human rights abuses during the military dictatorship in power from 1976 to 1983. This junta—which called itself The Process and came to be known as The Terror—engineered the Dirty War, in which some 15,000 civilians were kidnapped, raped, tortured and disappeared. Protest against Menem’s Pardon, which violates the Argentine constitution, has been anguished, bitter and unavailing. For Menem has proclaimed: “It is time for the military to regain its rightful prestige.”

In the space of several months, Argentine currency, the austral has fallen 600%. The yearly inflation rate is 4000%. The median income in Argentina today is $70 a month, much less than the rent on a modest one-room apartment. To increase its currency stores against massive capital flight, the government raided private CD accounts and has counseled citizens to buy only bare necessities. Just before sitting down to write this, I read that Menem is now proposing disemployment, as a means of crippling organized labor. If his plan goes through, workers will get jobs through the government; those who don’t will receive some government relief.

There have been food riots in the poor neighborhoods of Rosario (the home of Angélica Gorodischer), Buenos Aires and Córdoba. Many grocers, rather than be looted by their regular customers, opened their stockrooms. Menem insists these disturbances are due to leftist idealogues, and has intensified police and military presence in neighborhoods throughout the country.

Books are a luxury beyond most people’s reach. One day I found a long-sought copy of Gombrowicz’s Peregrinaciones en Argentina(“Travels in Argentina”), a handsome little book printed in Spain. When the bookseller, who’d been chatting me up, said the volume would cost tens of thousands of australes—about 31 dollars—I assumed he was joking. It was a paperback, after all, 130 pages. He was not joking. As a means of gutting the publishing industry The Process had levied an astronomical wide-ranging paper tax, which is still in force. Domestic publishers must struggle for raw materials while the duties in foreign books amount practically to a blockade.

Angélica Gorodischer, novelist and short-story writer, has published steadily since the mid-1960s. Considered among the best contemporary practitioners of science fiction and fantasy, Gorodischer is a writer in the line of Borges. Her work is rife with allusions, parodies and outright appropriations, often from popular genres. “I go for the déclassé,” she told me, “detective novels, thrillers, la série noire. I like the ‘underdog’ aspect of sci-fi. As for space ships and galaxies, I couldn’t care less. My interest is in the reality that waits behind reality.”

Marguerite Feitlowitz You wrote me in a letter, “Life here is surreal.” What did you mean by that?

Angélica Gorodischer I meant that this country is unlike any other in the world. Its tendencies are self-destructive. Everything here is concerned with death, not life. Argentina functions opposite to the way it should, that’s why it’s surreal.

MF A prime example of Argentine surreality would be the recent story about Massera.

AG Absolutely. How did you hear about it?

MF I read about it in New York’s El Diario/La Prensa. The article said Emilio Massera, the ex-commandant of the Argentine army who had been sentenced to life in prison for human rights abuses during the Dirty War, had been spotted strolling around Buenos Aires by the photographer Marcelo Ranea. Not long after Ranea’s photos of Massera free-and-easy in downtown Buenos Aires were published, his house was broken into and ransacked. The vandals placed the passports of Ranea and his wife, opened to the page with their photos, on the pillow of their double bed—exactly as government agents did with certain “undesirables” during the Dirty War.

AG Exactly right. When did this story run?

AG Soon after it happened then, that’s good. We knew Massera was out and about even before Marcelo’s pictures appeared. As you say, the whole incident is surreal. It seems there was a loophole in the law: those high-level military officers sentenced to long prison terms are actually free three out of seven days a week. The other four, they’re in so-called prison—tennis, golf, gardens and swimming pools.

MF Who knew about this loophole?

AG Apparently only the sentencing judge. This doesn’t just happen with military people. We’ve seen murderers get out of jail in a matter of weeks. It all depends on who’s involved. Needless to say, this provokes enormous anxiety, alienation, desperation. You ask yourself, “If something happens—if I’m robbed, raped, murdered, who will come to my defense?” The answer is, “No one.”

MF It seems there’s a high level of fiction at all levels of public life.

AG Reading a newspaper here is like reading a cuento fantastico. The front-page headlines of Pagina 12, one of our best dailies, are always ironic jokes: tango lyrics, popular refrains, boleros. It’s amusing, but it’s a symptom. The “news” never changes: the government’s “truth” is a ruse…

MF I get the feeling there’s a tremendous amount of anxiety about memory, particularly its role in public life.

Most of those guys brought up on charges now have high government positions. We must remember who they are and what they did. Because the future grows out of the past, we must stay alert.

Of course this is easier said than done. We are a people with a bad memory, a people hostile to memory. Old houses, the national library, the national archives—we destroy the very things that constitute our country’s memory. The country lacks an abiding urge to accumulate, safeguard and circulate reliable documentation. The crucial task of the writer here is to remember, to try to remember. Not that we should all literally note down facts and events. But memory is inscribed in a literary text in a process I don’t think anyone really understands.

MF Do you feel any temptation, perhaps on a submerged level, to encode what you have to say, or to censor yourself as a protection against censorship or repression?

AG I want to tell you something. I’m afraid. I’m still afraid. Even if you weren’t on a death list, and I wasn’t, something like The Terror marks you.

MF In what way?

AG I don’t know exactly. And I don’t want to know. As Borges said, one must write in a state of innocence. My writing has changed—change is an integral part of writing—and that to me is good. I’d go so far as to say that all of our writing has changed. We all live with the knowledge that during the Dirty War, some left, some stayed, some collaborated, some were tortured. I suppose to some extent we all encode that knowledge so we can go on living and writing with it, so it doesn’t destroy us.

MF I can’t help but think of Kalpa Imperial, the interconnected stories you wrote during the Dirty War. (These comprised two volumes, La casa del poder [“The House of Power”] and El imperio mas vasto [“The Most Vastest Empire”] published in Argentina in 1983 and 1984, respectively.)

AG Yes. I thought I was writing a Western version of The Thousand and One Nights. But in 1983 when the initial volume was published, I realized it was all about terror. The fictions brought me round to reality.

MF The Terror of the late ’70s is by far the predominant theme in the arts.

AG How could it be otherwise.

MF In the literary press the reigning opinion is that as yet there’s been no work that encapsulates the period. Perhaps it’s a cultural myth that for every great historical event there will be a great literary work.

AG I think that sort of symmetry is indeed mythical. Although it’s natural to want a magisterial work on a monstrous period of history—to explain, resolve, even contain it. But there’s been excellent writing on the Terror and events leading up to it. Griselda [Gambaro], for example.

AG Without a doubt. Also Tomás Eloy Martínez’s The Perón Novel. Osvaldo Soriano, too. It may be that the Great Work will be written a hundred years from now, by someone who didn’t live through The Terror. Who’s to say.

MF A word one hears every day is “crisis”—political, economic, social. In publishing, the topic is “the crisis of the book.”

AG What we have in Argentina is not crisis, but decadence, agony. This country is dying.

Crisis is something else altogether. Crisis is good—it brings change and renewal. The human being is a creature of crisis, a fictional creature. For we’re creatures of desire. If we didn’t invent desires, if we didn’t invent fictions, we would die. As Borges said, everything that was ever said in the world is a great story. History, philosophy, cookbooks, religions, scientific formulas, tango, novels, boleros, popular songs—all are stories about some part of the universe.

MF There’s a Kabbalistic notion that the world is a text, a great book, certain pages of which are missing. Our task—at once impossible and imperative—is to recover those missing pages. The profound importance of the Text is a theme that runs through all of your work.

AG I like what you said about Kabbala, but don’t completely subscribe to it. I believe all of us are constantly writing the text-that-is-the-world.

MF That comes through very clearly in “23 Scribes,” a story concerned as well with changing notions of what it means to be a scribe. There are traditional storytellers; official historians; anonymous, omniscient narrators; even an interviewee talking into a journalist’s tape recorder.

MF Right. The pieces here do not come together in what we would call a cogent story. In that sense, “23 Scribes” can be seen as quite dark. Chaos between the lines and in the margins.

AG It’s definitely a dark piece. On the other hand, if the Book were to complete itself, the world would end. We’d all die.

MF “23 Scribes” closes with one of the characters trying to remember a line from an ancient saga that talked about the flesh, the elements, man’s thoughts, laws, creations, and even death, all needing protection. It’s a perfect Kabbalistic moment: a text opening out into yearning for more text, a character almost recovering a page of his world.

AG Oh, I like that. As you know all of the stories in the collection Bajo las jubeas en flor (“Under the Yubayas in Bloom”) are linked by a text, The Code Of What Is and Canon of Appearances.

MF Mystical fragments which glide in and out of the stories rather like a phantom.

AG They do lend a ghostly presence. One day I want to write The Code Of What Is and Canon of Appearances. It will take a very cryptic form, with different planes of narration and description, with scientific language in some parts, lyrical in others. I see a sort of interminable Genesis. A Genesis-chronicle, that keeps going on and on…

—Margueritte Feitlowitz’s fiction has appeared in BOMB. She is currently writing and translating in Argentina on a Fulbright Scholarship.

Information for Foreigners: A Chronicle in 20 Scenes by Griselda Gambaro 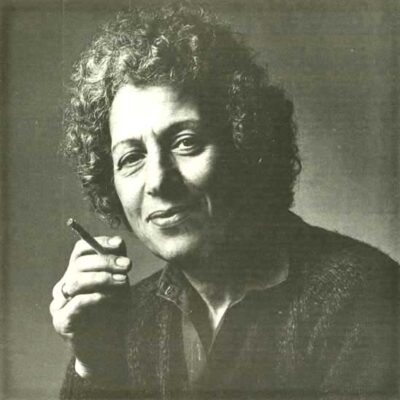 Griselda Gambaro talks to Marguerite Feitlowitz about the pressures of writing under an oppressive government regime in Argentina.