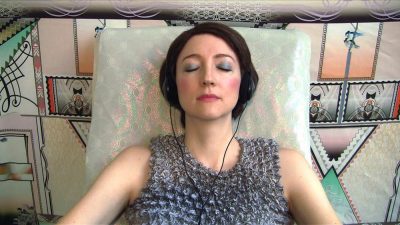 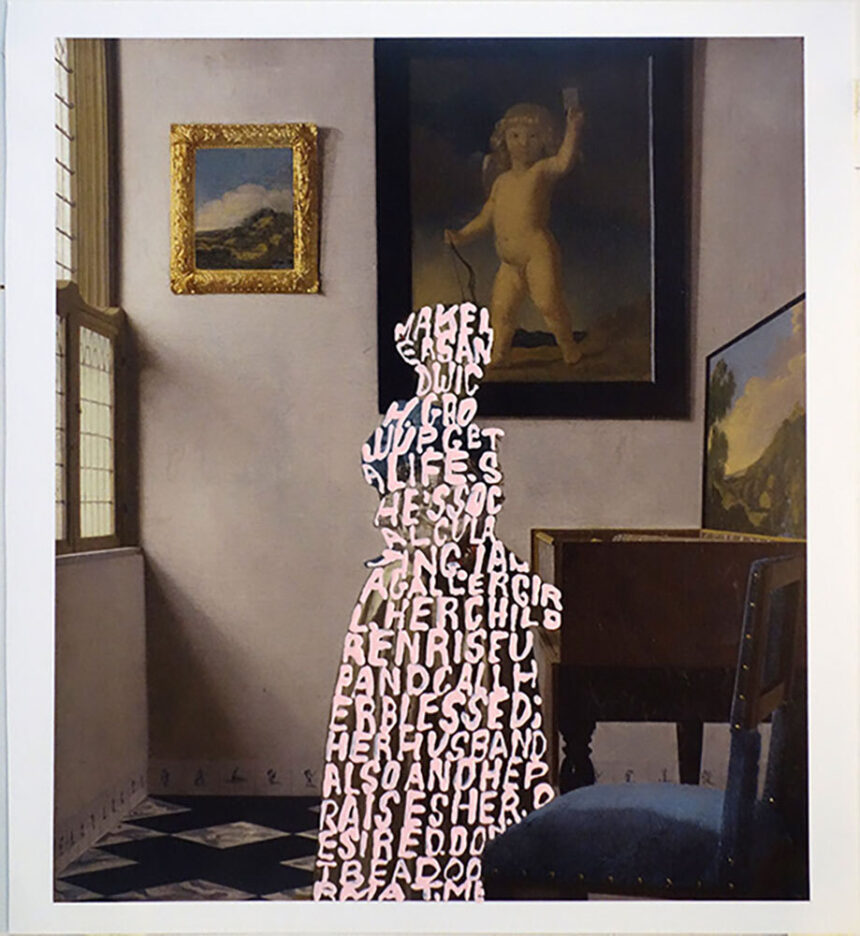 In 1969, Betty Tompkins appropriated images from pornography to create her large-scale monochromatic Fuck Paintings (later seized by French customs and denied exhibition). In her most recent series, shown at GAVLAK in Los Angeles this past July, Tompkins detourns iconic photographs of women by painting pink-lettered testimonies of harassment over their bodies. In the decades between these two series, she built an impressive body of work. For her series Women Words (2015), Tompkins produced one thousand small paintings featuring terms used to describe women (with the most prevalent being mother, slut, bitch, and cunt), while her Apologia paintings (2018) made ironic use of art historical images to frame the evasive non-apologies of abusers. Given that Tompkins has spent her entire career energetically confronting stereotyped portrayals of women, it’s no surprise to find that she speaks her mind.

Bean Gilsdorf Some of your work has been censored. What was that experience like?

Betty Tompkins I didn’t feel good about it; I felt abused. So I did a group of Censored drawings with pencil and stamps. The first one I did by hand in 1975, but to tell you the truth, my handwriting is awful. I had a stamp made and did the rest of the series with the stamp. And I found that it saved my sanity and restored my good humor. I let my anger just float away. Every time that I have been censored, I have retaliated by censoring myself. I can do it better than anybody else. These government people, social media people—they think they’re good at this? They ain’t seen me in action! I’ve had to do it a few times, and it has worked for me every single time. Once I have censored myself, I can just say, “Fuck you,” and I’m finished.

BG Well, that’s something I wanted to talk about. Does your transcription of the hateful things in the Women Words series function like an exorcism?

BT Let me think about that. I started one series of one thousand text paintings in 2013. Both times that I showed Women Words (at FLAG Art Foundation and at GAVLAK), we had index cards, markers, and pushpins on a table in front of a blank wall so that people could write their own ideas and tack them up. Both places sent me the index cards, and one day I opened them up, and I started taking photos of my favorites. They were insulting as all hell. And they were also hysterically funny to me, because by then I had been exposed to so much of that stuff. It takes a lot to get me going. I don’t insult easy.

BT I thought, “I have to do something with them, but I’m done doing those small paintings.” One morning I woke up and the words art history just broke into my brain. I thought, “This is great. You won’t run out of raw material before you’re ready to.” I started ripping pages out of art history books, and in the end I settled on four photographers: Brassaï, Weegee, Helmut Newton, and Richard Avedon. It seemed to me that they all had a slightly pervy quality. I kept finding these threads between them, what they had in common. And I did over forty works with images by those four guys. When the #MeToo movement began, I had already started those pieces. People have said, “You were ahead of your time.” But I don’t think you can be ahead of your time. The first time somebody sprung that on me, my answer was instantaneous: No, I was rejected by my time. And I was actually prepared to be rejected for all of my life. 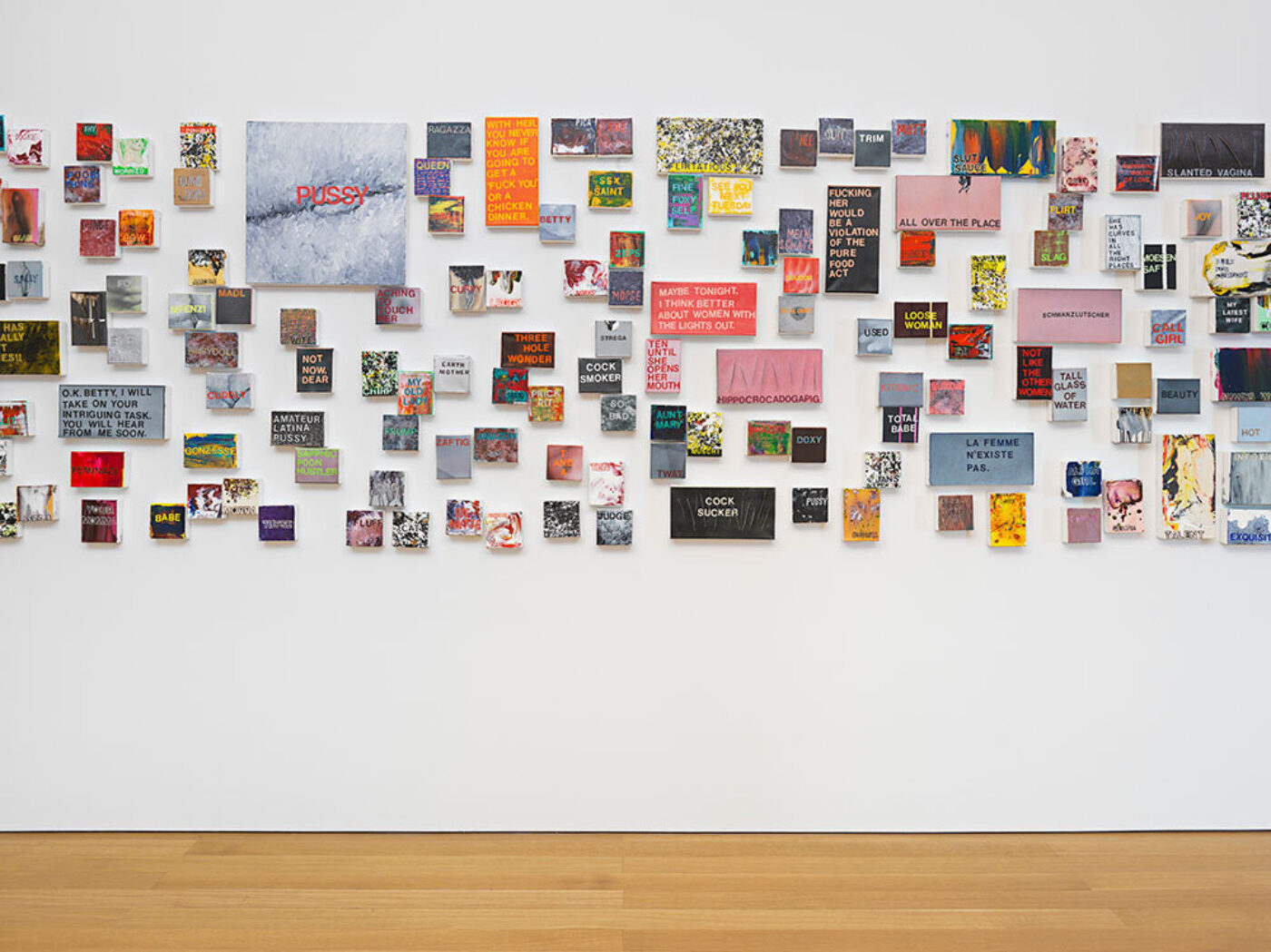 BG In the recent Women Words series and the Apologia series, you’ve written the words over the women. Why not over the men?

BT I cover the women because language defines us. The women are defined by what is written on top of them. They’re obliterated. The Apologia series is quotes by men who got caught with their fingers in the cookie jar. I thought, well, with their language, they have been obliterating women for years. So of course it’s going to go on the women.

BG And the pretty pink text?

BT It was sort of an accident. I did three pieces where the text was in different colors, sort of “flesh” colors, but different. And I didn’t like them. But none of us are bubble gum pink! It works well with virtually every palette. I’m working on these book pages, and I don’t want to have to figure out each time what color might disappear and what might stand out. So I thought, “I’ll just let them all have this.” I mix up a bowl at a time, and when it’s done, I mix up another batch.

BG It’s such a soft, gentle color. What does it mean for you to make something from words that are so offensive?

BT When I paint them I just keep my hand moving; I don’t pay attention to where a word begins or ends. It’s all just one run-on something or other. When I show them, I send the script for every piece, and the venue prints it out. Viewers can walk around with the script, because the works are very difficult to read. I’ve been told more than once that people start at one end of the exhibition and read every piece. And many women cry. It sounds really ignorant of me, but I hadn’t considered how triggering some of this would be, and that if you had certain experiences in your life, you would be triggered. And you would cry. 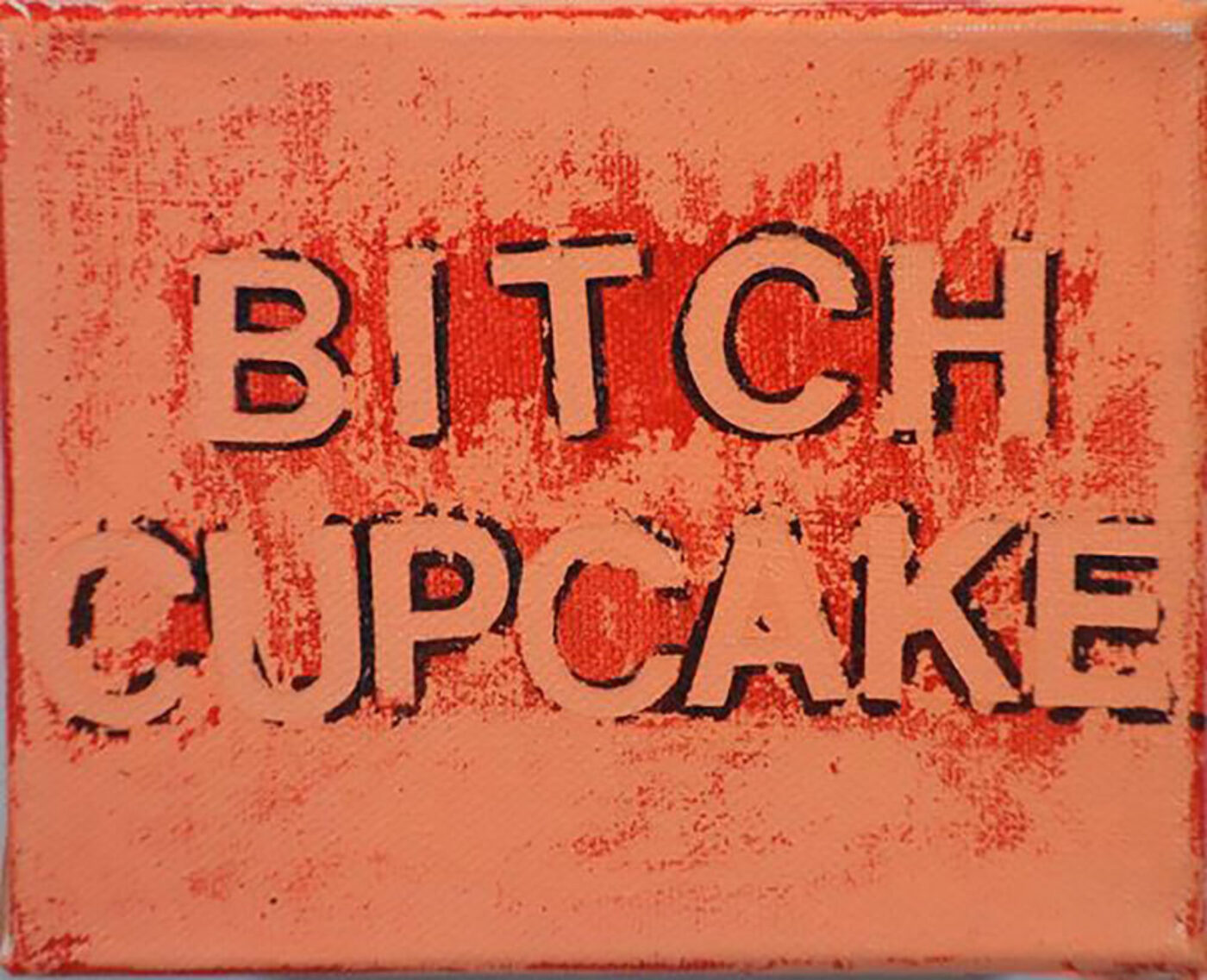 BG That’s why I asked about exorcism, but maybe that’s too strong a word. Maybe catharsis is better.

BT Yes. It’s cathartic. It isn’t exorcism because we’ve all heard these things. I have yet to read one that was totally new to me, where I would say, “Wow, I would just pass out on the floor if somebody said that to me.” Never. When I started to do the ones on the art history book pages, I looked up articles on classic abuse lines, and they sounded so familiar. There was not one that didn’t have the ring of familiarity to it. So I think we all just grow up in this atmosphere of misogyny and hatred and threat.

BT And I’m not this sweet, passive, little girl—not even when I was a little girl! I had the good fortune to go to an all-girls high school in Philadelphia. In the summer when I finished eighth grade, maybe three weeks before high school was going to start, I called up Girls’ High. I said, “I would like to become a student at Girls’ High in the fall.” That was really very good for me. And when I went to college, it took me a year and a half to get used to seeing boys in the classroom. And of course all the “men are superior” stuff showed up within fifteen minutes of my first class.

BG Was that shocking?

BT Yes. I had a very demanding father, and being a girl was no excuse. His favorite thing to ask me and my sister (and anybody our age who came over) was, “What’s going to become of you?” It was pretty obvious that saying, “Oh, I want to get married and have children, that’s my life,” was not going to be satisfactory, that it was up to me to make something of myself.

BG Do you feel that was an unusual experience for women of your generation?

BT Yes, it was extremely unusual to be raised to have ambition. It was an odd way to grow up. 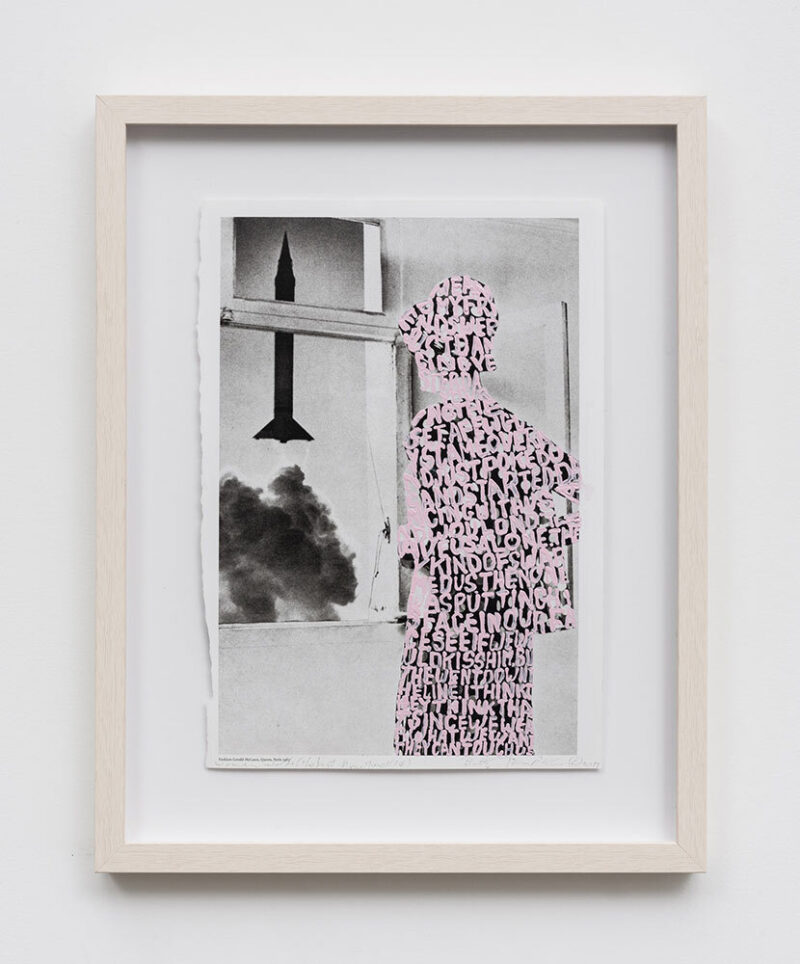 BG I’m curious about your views on feminism in the United States right now, particularly in the art world.

BT I’m not sure I’m qualified to answer. When the feminist movement in the New York art world got started—before email or computers, obviously—you got a telephone call inviting you to a group’s meeting. I was never invited, not once. And so I was not in on how it worked. I would have gone; I was curious. And I knew people who went to meetings, but they never invited me. They were also very suspicious of newcomers because the FBI would send people to infiltrate these groups. Probably in some form this still goes on today.

BT You’d have to be really naive to think that it doesn’t! But at a certain point, around 2000, when I started to show for real, I was slowly identified as a feminist. I’m in the feminist database at the Brooklyn Museum, and they ask you about that. I said I thought that the whole concept of feminism, the idea that women are equal to men and should be treated the same and paid the same and have the same opportunities, was the only choice that anybody could make. You were either a feminist or you were a misogynist. That’s the way I still see it. You either think that we should all get a fair shake, no matter what, or you don’t. And if you don’t, you’re not somebody I’m particularly interested in.

Betty Tompkins’s work can be seen in the group exhibition She Says: Women, Words and Power at the Virginia Museum of Contemporary Art in Virginia Beach until October 24.

Bean Gilsdorf is an artist and a writer. Her recent projects have been exhibited at Oregon Center for Contemporary Art; Museum of Contemporary Art Santa Barbara; and Stroboskop, Warsaw. She is a 2020 Andy Warhol Foundation Arts Writers Grantee. 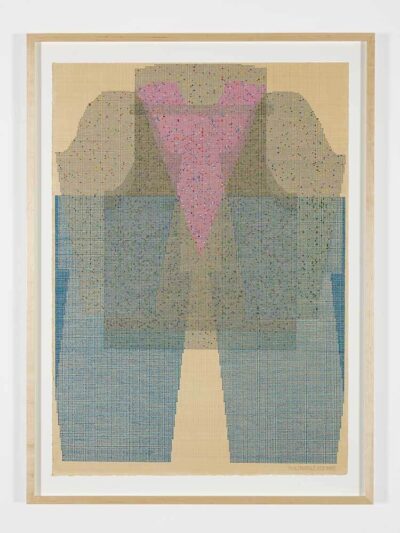