An Act of Defining: Jen Winston Interviewed by Leah Dieterich

A collection of essays offering an intimate look at gender and sexuality.

About six months ago, my best friend pointed me to Jen Winston’s Instagram handle @jenerous. The post was a cover reveal of Greedy: Notes from a Bisexual Who Wants Too Much (Atria Books), the subtitle of which has been leveled at me more than once, occasionally by myself. What I found on Winston’s feed and in her book was everything I apparently still needed to hear about my sexuality, despite having come out nearly a decade ago: that being bisexual doesn’t make me complicit in upholding the gender binary, and that “wanting too much” can be expansive and hopeful on a societal scale, not merely self-serving and individualistic.

Greedy inspires readers to rethink and relearn the world as they know and perceive it. By flipping the common bi stereotype on its head, Winston reminds us that being Greedy has always been a superpower—never a flaw. In a hilarious and smart account of Winston’s attempts to make sense of herself as she explores what it means to be “queer enough,” she shows us that being bisexual is about more than who you’re sleeping with; it’s about finding stability in a state of flux and defining yourself on your own terms. We spoke over the phone in late September.

Leah Dieterich The epigraph of your book has two quotes: “I have nothing to say / and I am saying it / and that is poetry / as I need it,” by John Cage, and “When you look at someone through rose-colored glasses, all the red flags just look like flags,” by BoJack Horseman. I love how this sets up your high-low aesthetic. Tell me a little more about what these two quotes mean to you.

Jen Winston The BoJack Horseman quote is like, the thesis of my life in so many ways. It sums up my misplaced optimism. As far as the Cage quote, I’d been thinking a lot about his work and how it aligns with this whole idea of naming and being—that when you name something, you create it, essentially. I’m interested in how that idea contrasts with the way a lot of the queer community feels about labels, and the way a lot of people feel about someone proclaiming their bisexuality in general. There’s this sense that you don’t necessarily need labels, or that just generally “queer” or “fluid” is enough for everyone. And that’s definitely enough for some people, but it’s not enough for me. I needed the word bisexual.

LD Your book is all about embracing the messiness of identity and accepting yourself as bisexual despite your initial discomfort with the label. Has it been difficult for you to embrace your identity as a writer? At the beginning of the book, you have a forward about imposter syndrome, so I’m assuming it’s been a challenge.

JWIt took me forever to name myself as a writer, but doing so was helpful in the same sense that naming myself as a bisexual person felt necessary for accountability and for my personhood. Something else I learned through this process is that I’m not the kind of memoir writer who can avoid writing about writing. It just distances me from my truth.

LD I’d love to hear more about the path to publication. It’s different for everyone, tell me how it happened for you.

JWI’d love to say that it just happened overnight, but I had written five separate proposals, maybe more. I did national novel writing month once, so I have a terrible novel somewhere on a hard drive—

JW Good. It’s the rite of passage, I guess. I had written all these proposals, all different ways of writing a sex memoir. None of them worked, but there was one that ended with me thinking, Wait, I’m bi and I’ve been ignoring that. I hadn’t come out yet really; I realized that there was more for me to explore. As I started writing the proposal, I felt I needed to figure this out more before I just tacked it on as a fun ending to a book. When I started to learn more about bisexuality as a lens to see the world, all the bisexual politics and history, I realized, Oh, this is a way for me to talk about everything I want to talk about. I had thought I knew what I was doing with my proposal, since I had written so many, but for Greedy, I worked with a proposal coach, and I’m so glad I did, because she also helped me find my agent and fine tune my marketing plan.

JW So, I sold it on proposal but then I wrote it in three months.

LD Wow. How did you write it in three months when you were working full time?

JWAt that time, we were all working remotely, and I had a great boss who knew that writing a book had been my dream and told me I could log on at 11:00AM every day. Normally I’m the type of person at work who will seek out projects and try to do more; but during this time, I did only what was assigned, which was ultimately not that much. I mainly wrote in the mornings in the beginning, and then I started writing every waking hour of every day; and then during the winter break, I rented an Airbnb in Vermont and got into full mad scientist mode. Honestly, that’s when the majority of it came together. 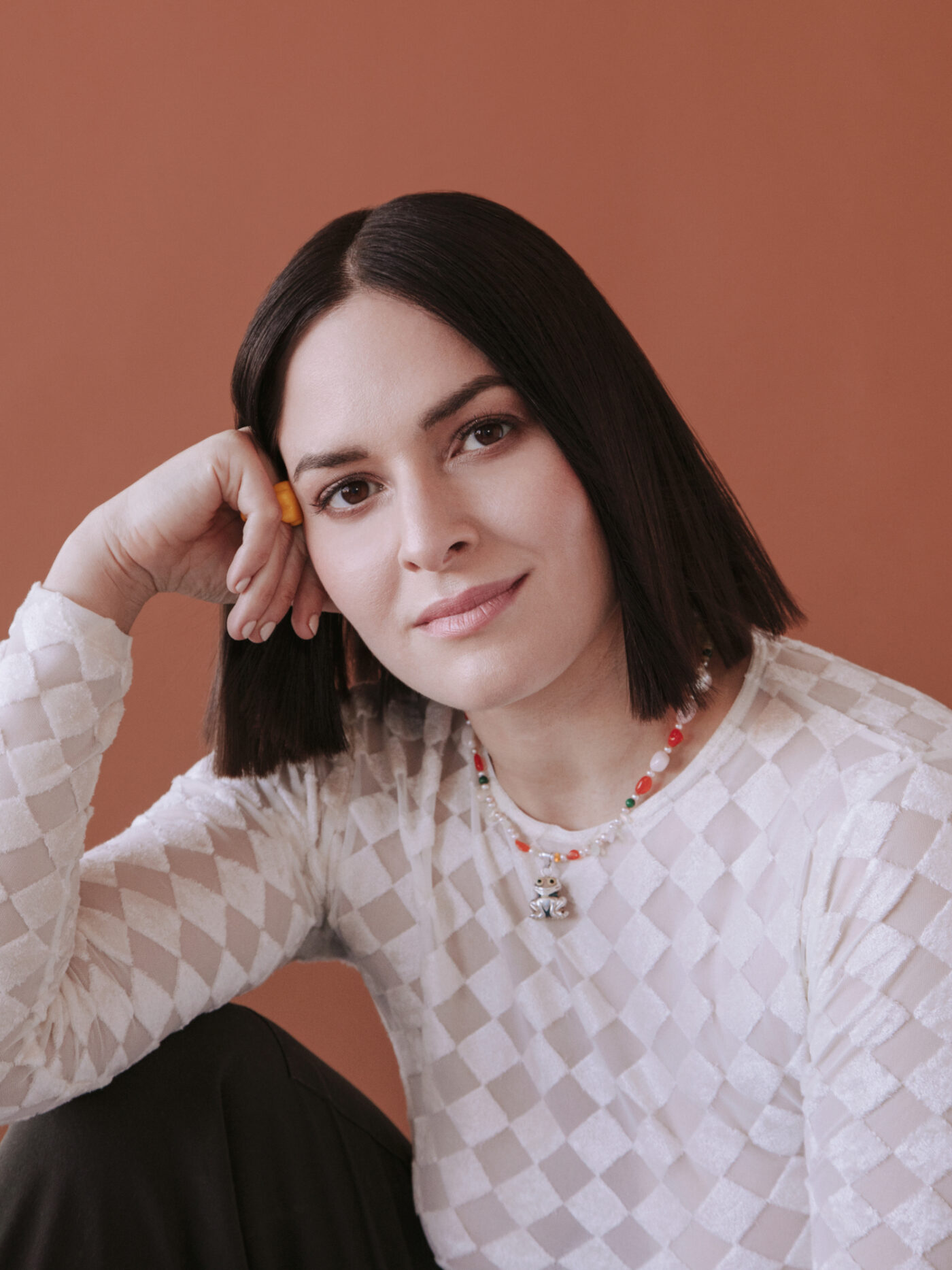 LD How did the title come about?

JW The title was in my original proposal, but pretty much everyone who was involved in decision-making about the title (who I never got to meet or talk to) thought the title was too negative. It took a lot of subtitle work to remind people that it was the point.

LD I love the title. Why not take the criticism that’s leveled against bisexual people most frequently and work with it?

JW I think in essence, with bisexuality, there’s this idea that you can’t even really reclaim the things that are used against you because your identity is so dismissed as an identity at all. For me, it felt like reclaiming the word “greedy” was an act of defining bisexuality in the process.

LD In one of the essays, you touch on starting an Instagram feed in 2016, which was not about bisexuality but more about politics, feminism, and anti-racism. At what point did your feed take the bisexual direction? Was there a moment when you realized, Oh, this is content people are hungry for?

JW After I came out on Instagram, I was shocked at the level of comments I got. So many responses like: “I resonate so much with this.” “I see myself in this.” “I identify as bisexual, and I’ve never told anyone.”

LD Did you have a big platform at that point?

JWI did, but I rarely talked about myself. Even when I came out, I still felt a lot of shame around it, I think, because I felt it was a binary term, so I was hesitant about that aspect of it. It was really the work of Shiri Eisner that made me be think, Oh, I’m actually proud to be this, and it aligns with all my other beliefs. Everything fell into place for me with that. I felt comfortable advocating for it and talking about the history, and I wanted to share that with people, in a sense to justify the way I identified. Then I created a newsletter, The Bi Monthly, with a friend. We wanted to start a bi party series because we didn’t feel like there was anything explicitly for us.

LD Right. As a bisexual person it’s easy to feel like an imposter in gay and straight culture.

JW Yeah, so we wanted to start a bisexual party series, but then COVID hit, so I was like, I’m taking this title for my newsletter.

LD How did you come to the Shiri Eisner book by the way? It’s nearly a decade old at this point. I got a copy after you posted about it, and when I read it, I thought, How does this book address so many of the questions and experiences I’ve had and yet I’ve never heard of it? I had tried to do so much reading on my quest to embrace my sexuality, but I’d never come across it. I guess it’s a perfect example of the fact that, because it’s about bisexuality, it’s totally invisible.

JW That’s exactly why. I honestly have no idea how I found that book. It was probably from stumbling upon Shiri Eisner’s work when I was Googling, “Is bisexuality binary?” I was trying to decide if I needed to call myself pansexual. (laughter) I was like, “Am I a pansexual?” My partner is non-binary, and I was so frustrated by how much I resonated with that word, but how much I hated the fact that it might be an oppressive word. So, I went on a research tear, and that’s how I found the work of Julia Serrano, who’s a trans bisexual activist, and Robyn Ochs as well. It was written in 2013 but many of the studies it cites are from 2003. I tried to find updated ones but there have not been many updated studies. There’s almost no research done on Bi and Bi+ communities.

LDSpeaking of invisibility, until recently, male bisexuality has been even less talked about, and it’s a topic I’m really drawn to; so naturally when I first got Greedy and noticed that there was an essay specifically about bisexuality in men, I had to read that first. In the essay you say that people often fetishize bi women but do the opposite to bi men—maybe “revile” is the right word—but that you find male queerness attractive. Can you talk a little bit more about that?

LDWhat kind of a book do you want to write next?

JWI’ve been thinking about it a lot because I’m in this first-time writers Slack group and everyone else seems to be done with their second book or working on the second book, and I have to keep reminding myself that most of these people didn’t start their first books less than a year ago.

JWBut there are a few things I’m considering for a next book. One is a novel. I’ve never been strong at writing fiction. I fear that I am an essayist forever. So, I’m very interested in writing something that is loosely autobiographical about a relationship like mine, but with characters who’ll take on lives of their own. There’s a lot more I wish I could have covered in Greedy about trans-identity manifesting as extreme anxiety and how the OCD related to that, gels with my very severe ADHD. I would love to explore that dynamic and those paths, setting up characters and seeing what happens to them. The other thing I’ll probably end up writing is a book about my journey to queer parenthood.

Greedy: Notes from a Bisexual Who Wants Too Much is available for purchase here.

Leah Dieterich’s essays and short fiction have been published by Lenny Letter, Buzzfeed, LitHub, and BOMB among others. She is the author of Vanishing Twins: A Marriage (Soft Skull, 2018) as well as a book of thank-you notes, entitled thxthxthx: thank goodness for everything (Andrews McMeel, 2011).