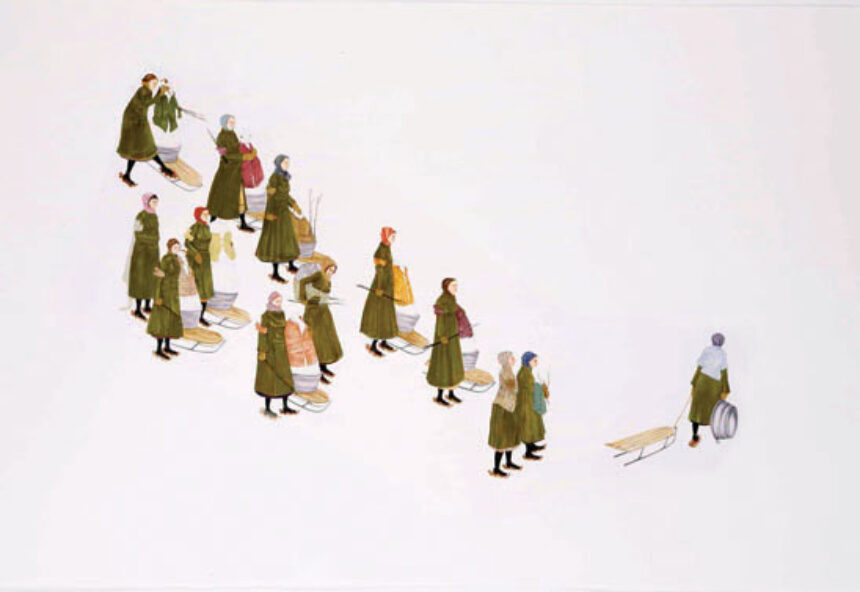 Part of our attraction to art is its ability to engage our imagination, and Amy Cutler’s highly detailed, yet carefully ambiguous portrayals of women do just that. The idiosyncratic rituals she illustrates, and the allusive narrative world she creates, become, rather than a statement of meaning, a conversation, and because that conversation can be extensive, I’ve chosen one specific painting to talk both about and with. 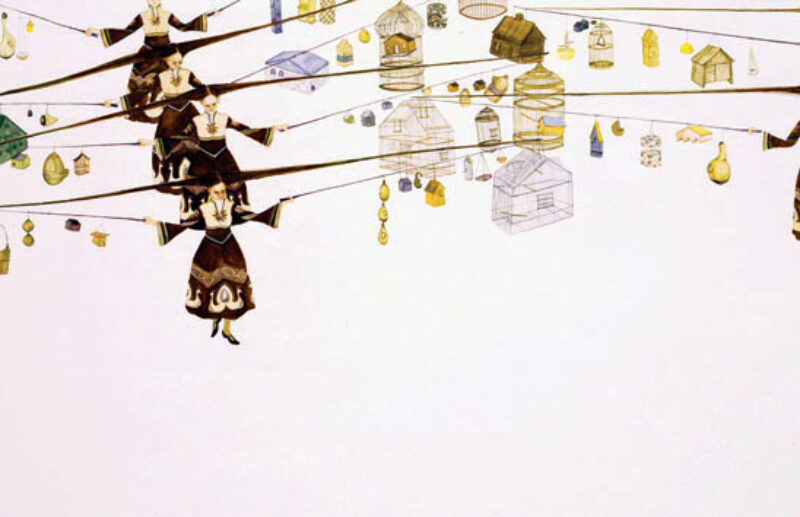 Preceding is a painting of 13 women on a white background, and the women are walking on snowshoes. They have sleds and buckets and some of them have snowmen in their buckets in various stages of meltdown. The story of these women—for me—goes something like this: In the land of Cutler there are no men, and basically that’s fine, except that sometimes, like any of us, the women who live in this land want a little companionship. One of the women—her face is the one face not visible in the painting—has an idea: to go to the place where snow is plentiful, to build themselves snowmen, and to carry these creations back to their town.

So they do. And all goes well, and the women are all happy. They’ve dressed for the occasion, in green coats made of something like velvet or moleskin. They wear patterned scarves around their heads, and they’ve all made differently patterned jackets for their new companions. And then their companions start to melt.

The women are nameless, but because they’re drawn with a precision that gives each one a unique personality. I’m going to give them names. May, for instance. She knew this wasn’t going to work out.

She’s mad at herself for coming along, for getting her hopes up for nothing, because now her insubstantial companion is fading away. Eunice, on the other hand, is holding on to her disappearing snow pal like a souvenir, denying the fact of his melting, hoping against hope that what she knows to be happening isn’t quite happening.

Constance and Clara are walking together, having discarded their buckets, holding the sticks that used to be arms, the carrots that used to be noses, their shoulders bent under the weight of their grief and loss, bespeaking an acceptance of that loss. Clara is wearing her snowman’s jacket to fight off the cold.

Even the women with still-intact snowmen can see, from the plight of their sisters, what their own situation will become. The moment of the painting precedes the moment when the whole community of women will again be alone together. The white, unpainted, ungrounded horizon, the lack of contemporary references, even their matching armbands acknowledge that aloneness, and their reaction to this particular event is their reaction to life itself. Just as we look at people on the street without knowing their pain and struggle, so we see these women, but with a difference: Cutler allows us a glimpse into their sorrow, and in their reaction to that sorrow we get to know who they are. In her depiction of a single moment in this story the painter gives us, not quite a god’s eye view, but a sympathetic, nonjudgmental window onto a world. It’s a world of women, imaginary and mythic, and because it’s a human (and humane) world, its our world too. 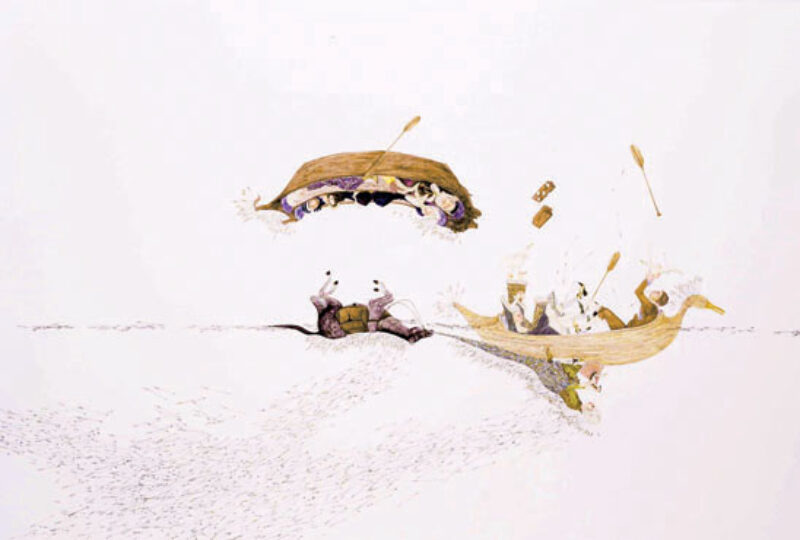 Who gets written into history? Who is forgotten? What are the conditions under which eradication can occur? 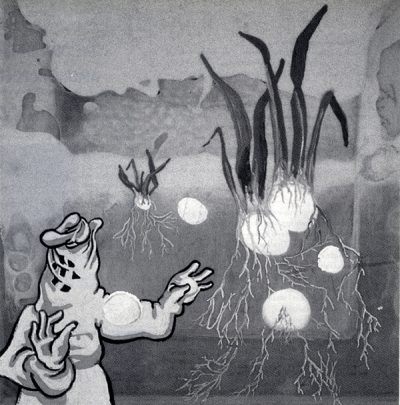 The quality of Mala Iqbal’s action figures and the fluid relationship to their environment was what sucked me into her animated world.