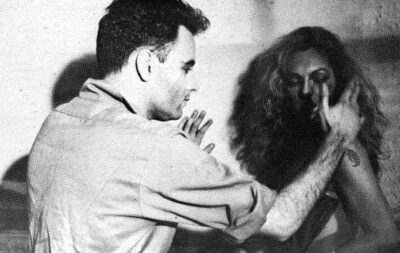 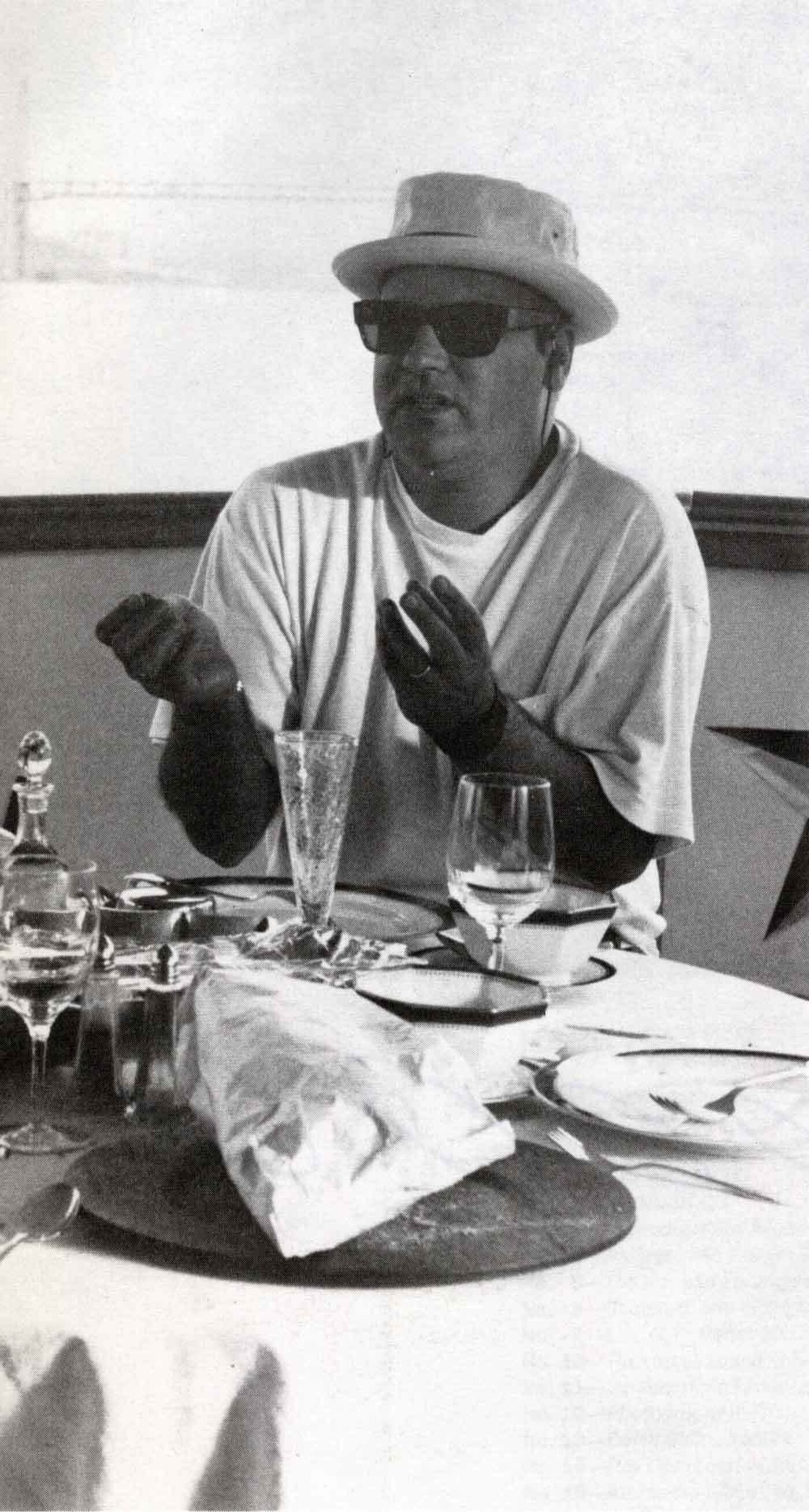 Amos Poe, on the set.

Amos Poe sits for this interview in his office on the eighth floor of the Cable Building at Broadway and Houston Street in Lower Manhattan. He wears a black eye patch over his eye from an accidental injury inflicted by his two-year-old daughter, Lucy. Seeing her daddy’s eye bloodshot and teary, he tells me she had kissed it to make it better, but this afternoon he needed laser surgery to repair a bifurcated cornea. Now, late at night, over coffee and cigarettes, fatigue is setting in. The patch is giving Poe fits. He keeps rubbing the eye underneath. The patch rides up his forehead to his hairline, the white of the repaired eye shines blood red beneath the twin humps of his gray fedora.

Joel Rose You all right?

JR Triple Bogey on a Par Five Hole is quite an unusual name for a film. You haven’t directed in a number of years. I know you’ve been working quite a bit in Hollywood for the studios. What brought you to a project of this size? A budget of $350,000 is considered peanuts these days. 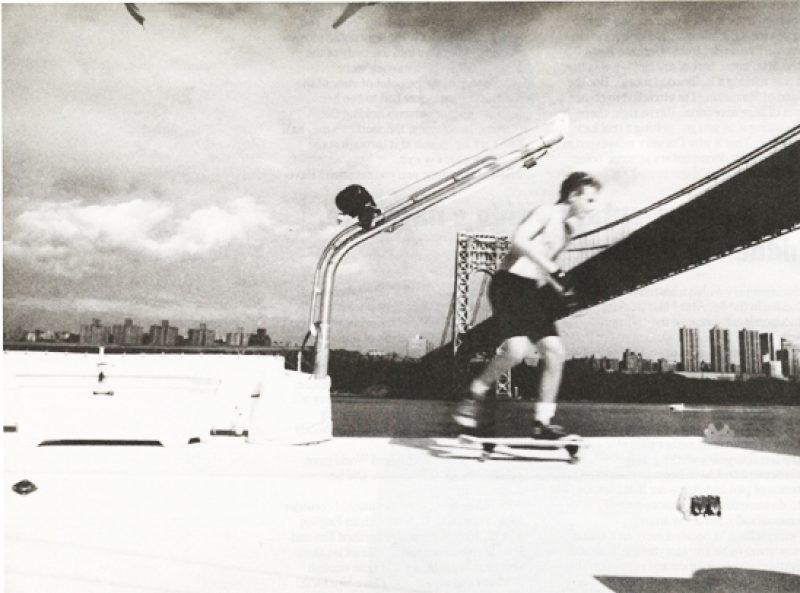 AP The original impetus was the result of a number of things coinciding. Through the ’80s, the three films I was responsible for were Subway Riders, Alphabet City, and Rocket Gibraltar, and all were, I felt, personal failures, on one level or another. Subway Riders never showed in the States; Alphabet City, in retrospect, was like doing a Roger Corman film. I grow increasingly fond of that picture. And Rocket Gibraltar I thought was going to make me a Hollywood “player.” I put my heart and soul into it and then I got fired—essentially by my own lawyer. So I feel some bitterness and betrayal there. Ironically, though, it’s the picture I learned the most on. And I’m still friends with some of the talent and still work with some of the crew. Also it was Macaulay Culkin’s first film and I guess it’ll go down in the history books as such. But it could have been a great film…

I knew that I needed to get back to personal filmmaking. I’d been making my living as a screenwriter. To me, filmmaking is writing, directing, producing, all three, not any single facet. But I needed the opportunity. In the position I was in, the only way to go was small budget. One night, I was hanging out late researching a screenplay for Columbia Pictures on vogueing. At one point, I told the voguers I had to get home. They wanted to know why, to their minds it was still early. I told them I had to relieve the babysitter, get her out of there and pay her. They were mystified: “Babysitter? What’s that all about?” I explained I had all these kids, all this responsibility and they go, “Oh,” not quite grasping it, and right then and there I began to realize that I was doing all this research outside of me. It dawned on me that maybe what I should be doing is writing about something inside of me, something closer, something that was really my life.

JR That’s always been your strength—your life. You write extremely well about family, especially in Rocket, and this new script, Mrs. Dogg. How did the idea for Triple Bogey come about?

AP After the vogueing script, that summer, the summer of ’89, my wife and the kids and I were going to spend the summer in the Hamptons, Connecticut, and Maine. So as not to go crazy, I took my old Super 8 out of moth balls, started shooting my kids, and that immediately put me in mind, well, how can I introduce these images into something that could be more than these images, something that could be a small film. I started getting ideas and I wrote it as I shot. It became a game. If I went out in the car with the kids, I would say, “Oh, there’s a bank!” We would pull up and they would stand outside waving and I would take their pictures. My son, Nick, would turn around to some lady coming out, counting her money, and Nick would say, “My dad’s making a movie and we’re in it and we’re going to rob the bank!” And she would look real strange and say, “That’s nice, dear.” It was fun.

AP Not more fun, but more real. I’ve had some strange experiences. But I’ve learned from them, matured, and that gives me a big advantage. For every movie I’ve made, from Unmade Beds, the first, some part of my fantasy was that I was making a Hollywood movie. But the kind of filmmaking I’m attracted to comes out of pure invention. You’re right there inventing it as you go, getting a real kick out of it. That’s why I’m very interested in attempting a documentary at some point. In Triple Bogey, I got to make a documentary within a narrative. The truth hidden in the lie. Also I like working independently because the collaboration is very free. The one constraint you’re always aware of, of course, is time and money. But that being a given, you have great freedom.

JR You take great liberty with narration in Triple Bogey. What was the intention?

AP The film was done from the point of view of filmmaking rather than story. Over the last few years working as a screenwriter, I have been so restricted in terms of plot and character that I wanted to do something much more formal cinematically, get away from “storytelling.” I decided early on if there was going to be any storytelling, it would be through convolution and repetition. In fact, that was also part of the process of trying to make the movie on a very low budget in a very contained amount of time. I thought if I could see this film formalistically, then the production end would be created by the very nature of the writing. So in the first draft, there were four central characters: the three children, plus Nina, their guardian. In addition, there was the lawyer, the agent, and the cop. Seven in all. My idea was to do one-on-one interviews with each of these seven, thus finding out what happened storywise, each telling his or her own version. So, to my mind, that was Act One. In Act Two, we would return to the original four, using every combination of two, six in all. So we would have the three children…Satch and Nina, Amanda and Nina, Bree and Nina, Satch and Amanda, Satch and Bree, and Amanda and Bree. This way we get to see them interacting, using Remy, the interviewer, as the foil. In Act Three, it would be every combination of the three, followed by all of them together, and then some kind of denouement. And that would be the film. Very formal. I felt it as a writer’s improv, just as an actor might do improvisation. I’d established characters; now what would these characters be like together, and what would that show? At the same time, I used the interviewer, Remy, as a filter, and I wanted to give some idea of who he was.

AP Eric Mitchell played the part, but some people, after seeing the film, actually thought it was me. During the filming, Eric used to say, “When my friends ask me who I’m playing in this movie, I tell them I’m playing Amos’s alter ego.” But really, if you think about it, I do play a part in this movie, but not Remy. I’m the mother’s point-of-view character. Originally, what I was looking for was to make home movies that are “real.” The way I told the story, the way home movies were incorporated into the body of the film, I did it so both movies were supposedly from the point of view of the mother. So we never had to see her because she was always holding the camera. In actuality, the mother’s me, as if I was trying to look at it through some maternal eye, my eye.

JR So ultimately, are you satisfied? Have you succeeded on your original concept?

AP Looking at your film, once it’s done, you think of a hundred different ways you could have done it. I think of this as a very American film. A very New York film. It’s very much an experimental narrative. So much filmwriting revolves around genre, so when you finally get to break away a little bit, it’s fun. You don’t get many chances. Unless you’re lucky. Or Woody Allen.

JR John Heyman of Island World gave you money for this project. Did he basically leave you alone?

AP I have been very fortunate. I consider John Heyman to be God with an English accent. Here I am with a finished film and John hasn’t even read the script let alone seen the film. He just gave me enough rope to hang myself and I love him for it.

JR He must have great confidence in you.

AP I think he has great confidence in himself. When I was working out the story line for Triple Bogey, one of the people I kept telling the plot to was a psychoanalyst. It had come to me that the two things parents are most fearful of are: one, the death of their children and two, their own deaths. Your kids dying—you can’t bear even thinking about that, something so horrible. So I opted for the second choice. You die, your kids go on. They’re okay, in some ways, they even flourish. In the case of Triple Bogey, Amanda writes a book about her parents being gunned down on the golf course and makes a fortune. I wondered about the psychological implication. Not only for the film, but for myself. I thought, “Wow! What a relief! I’m gone, but the kids’ll be all right.” So the shrink listens to all this, and he shakes his head. He says, “No, Amos, that’s not it. It’s not the kids being able to take care of themselves that’s important.” The whole point of this exercise, the entire thrust, according to him, is the same old thing: me running away from my responsibilities. The way I’ve got it written, the kids manage fine without me, so I might as well do whatever I want, no constraint, no culpability.

JR So is Triple Bogey an ode to irresponsibility or selfishness?

AP Self. Others. If we have learned anything from the human failures of this century, whether it’s individualism, nationalism, the environment, the Persian Gulf, everything—it is that human beings are the most dependent of creatures and that this is a very small planet covered mostly by water. And kindness and respect are the rarest of commodities, and that world events, as well as personal ones, are rarely rational—they are almost always emotional.

Joel Rose is the author of the novel, Kill the Poor.