Alone But Not Lonely by Effie Bowen

robbinschilds embark on a journey that straddles the mundane and the otherworldly in their latest two-part show, I came here on my own & Salzburggrubzlas, Grubzlassalzburg! 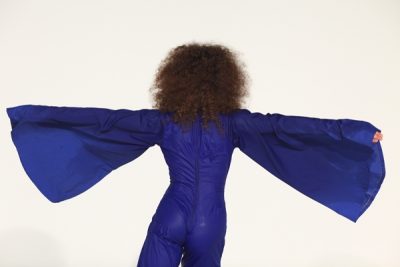 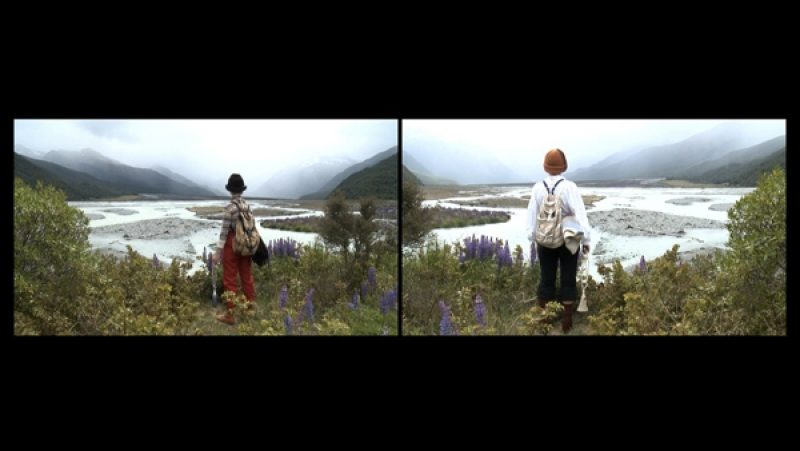 robbinschilds. I came here on my own., 2012. Video still. Image courtesy the artist and Art in General.

Their latest two-part show at Art in General is half live dance and half film. The opening live portion, Salzburggrubzlas, Grubzlassalzburg!, is a quartet featuring Robbins, Childs, and younger performers, Aretha Aoki and Vanessa Anspaugh. The audience sits against two parallel walls while in the center of the space, Aoki and Anspaugh deliberately swing their arms, spin, and lunge in a momentum-less duet. Manning four slide projectors for most of the dance, Robbins and Childs shift the carousel from one slide to the next in sync, projecting four images on the wall above each audience row. The pairs of photos on opposing walls are messy snapshots of food, buildings, and landscapes, arranged as slanted off-set diptychs. While the pairs of images are clearly not duplicates, the photos presumably present the same subject captured through the eyes of each choreographer.

Although the metaphors expressed in Salzburggrubzlas, Grubzlassalzburg!—the live portion of the performance—are poetic, they are not subtle. Sitting across from the other half of the audience, we are face to face with our own “reflection” until Robbins and Childs transport massive split screens to the center of the space, rupturing us from our counterparts. Under lighting designed by Megan Byrne, Anspaugh and Aoki perform the animated flip image of one another. Robbins and Childs, perfectly countered, play their own recorded voices from iPhones, providing diary-worthy summaries that detail each one’s experience meeting a man in Munich and arriving in Salzburg. The audio flips between both their voices as all four performers heavily stomp about the space and end by languidly rolling across the floor closest to each audience. 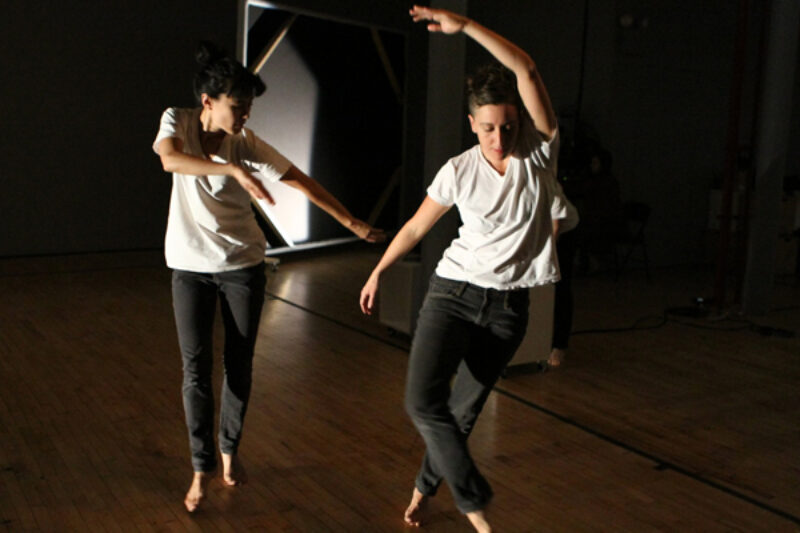 The split screen four-channel video, I came here on my own, continues the investigation of duplication and reflection, already present in the constant mirrored duets of the live performance. The concept of a “mirror journey,” exhausted by now, is reinvigorated in the cinematic scope. Transformed from their affectless live cameo, Robbins and Childs become fantastical creatures covered in cascading layers of earth tone and patterned garments in the film set to ambient tunes by AV Linton. They tower over tilted pine trees one moment and are reduced to atomic specs on an arid slope in the next. Bisected by the split screen, they trample through pristine white snow and frolic between massive, lush birch forests. The landscapes alone are consuming but Robbins’ and Childs’ bodies embark upon a cryptic quest, seemingly as infinite as the vast lands they traverse.

The wayfarers fluctuate to and from the dividing center of the often-mirrored landscapes, creating imaginary ripples as they extend their expedition far from the camera’s lens, affirming their infinitesimal size against that of the earth. Occasionally converging and disappearing into the black center that separates them, their aloneness isn’t constant. In some shots, the mirror image is completely abandoned and the digitally constructed duet becomes briefly real as Robbins and Childs, without interacting, exist in the same space at the same time. What the wanderers wear is just as important as where they go. Reminiscent of an editorial spread, the pop of a vivid red pant or the addition of a leopard print serape turns a mediocre shot spectacular. We watch the earth transform as quickly as their outfits do—whether shocking or subdued, the palates of the land and their wardrobes are boldly tailored and visually delicious.

Occasionally each voyager confronts the other to perform staccato and balletic gestures in profile, identical to the choreography Anspaugh and Aoki demonstrated live earlier. These fleeting moments are playful yet familiar—like a video diary outtake of two choreographers who went on vacation. Apart from these interludes, Robbins and Childs seem alone but not lonely. When they sit, long-brimmed bonnets obscuring their faces beside a brook littered with flowers, they morph from two bodies into one, an iteration rather than an individual. 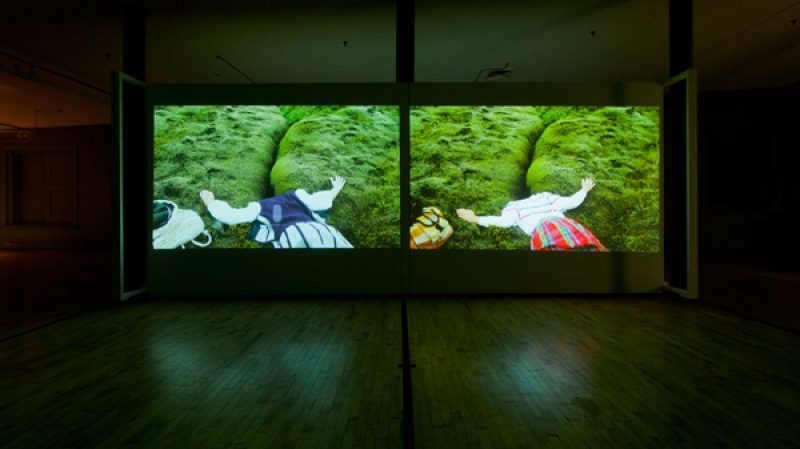 A discernible and invigorating melody emerges as they occupy seats in a cave. Robbins and Childs dissect their taut braids until their hair falls long in front of their faces. For the first time during the film, or live portion of the program, a climax is imminent. The figures trample through windy high grass and recline on a volcanic cliff as vibrant harmonies erupt, reaching a crescendo just as the women, hiding beneath their hair, begin to re-braid their locks into a tight top knot and grab their bags, equipped to resume their cyclical odyssey.

An unnecessary live conclusion resurrects all four performers. Much less crisp, mysterious, and striking than the film, they amble through the space and rearrange the large screens to the soundtrack of their own voices dryly documenting their mundane trips from their homes to the subway. The show obliges live performance to a fault, creating a supplement for a non-existent deficiency in the sterling film portion of the program. As the live performers fade to the periphery, another diptych projection of two skewed yet lucid sunsets appear and the lights slowly fade. The lush and sprawling adventure of I came here on my own quickly evolves into a faint and private memory.

Effie Bowen writes, performs, and sits at a desk. She lives in Brooklyn, NY and drinks a lot of tea.