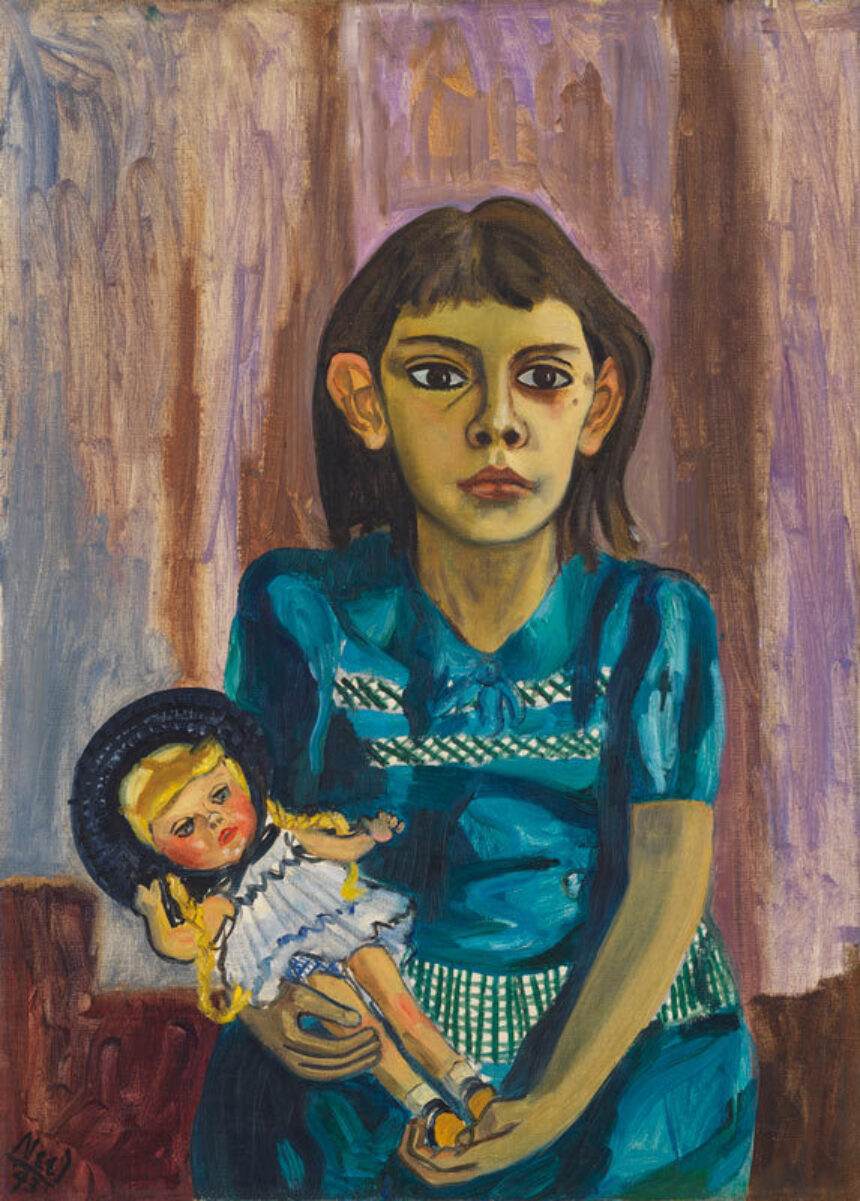 Critics often talk about the humanity of Alice Neel’s paintings—or maybe they talk about how often critics talk about it. The word snugly adheres itself to the late artist’s work like skin, as though humanism could not be found, one way or another, in every portrait of a human. In reality, some of Neel’s most recognizable pictures are well known because they express a kind of loving cruelty—the humiliating yet awed portrayal of Warhol and his corseted stomach, or her nude self-portrait that scandalized so many upon its debut. But this bluntness—the occasional lazy eye, unfeasible proportions, or slightly morbid hues—lends her art its mysterious compassion as well as a sentimentality that shirks excessive or unearned emotion. Neel sought to depict life in all its forms, but more remarkably, her loyalty was to what—or whom—she believed we ought to see.

Most of the people that Alice Neel painted look directly at you. Neighbors, friends, intelligentsias, strangers; their eyes return a gaze as though they’re familiar with whomever stands before them. A new exhibit of Neel’s portraits from the 1950s through the 1980s at David Zwirner, curated by New Yorker critic Hilton Als, rejoices in the kind of merciful tension this eye contact occasions. In Uptown, which is, a little regrettably, located in Chelsea, Als brings together over thirty portraits Neel painted of people within her social circle in Harlem (if one takes a detour to Als’s Instagram, they will stumble upon a similar project: a compulsive record of tender snapshots presenting the people encountered in his life). The sitters in this show belong to multiple classes and ethnicities, though all are people of color. The audacious roominess of the galleries, where paintings are plopped carefully onto large white walls, allows each portrait—or  person—to exist both alone and in relation to those nearby. The arrangement made my viewing experience rightfully slow, something to appreciate when considering Neel’s ability to still: attitudes, a gesture, time. 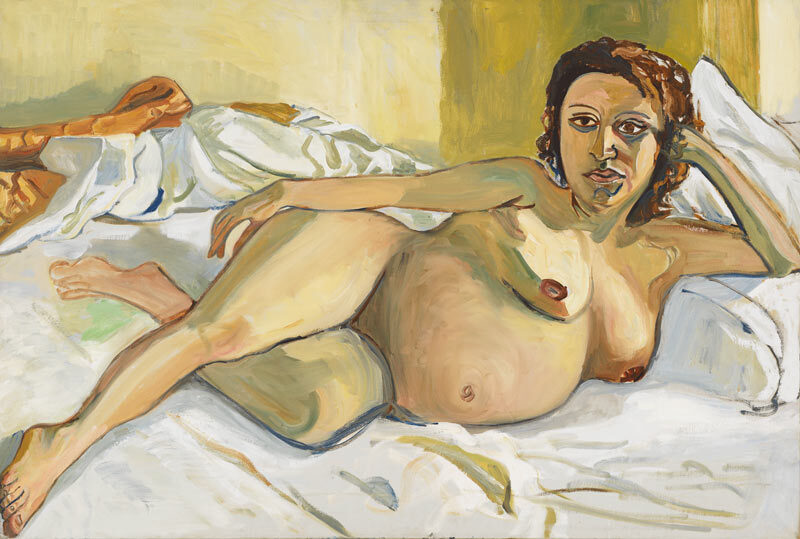 As Als writes in his catalogue essay, itself a coarse gem of memoir, criticism, and biography, Neel was drawn to the “drama of being,” and this drama often manifests not only in a sitter’s expression, their history or a work’s palette, but also in the paint itself. Neel’s oils are often riled, with thick textured brushstrokes fenced into faces and bodies with black, and later blue, lines. These brushstrokes, full of gentle violence, make it easy to imagine Neel at her easel, quickly but assuredly moving her hand. This ravished urgency is met with the patience many sitters seem to display. The people Neel painted are usually depicted as guardedly relaxed, hands arranged awkwardly or in a frozen gesticulation, as if in the midst of deep conversation or shy small talk. The elusive theater of portraiture itself is a persisting force in Neel’s work through the years, as well as its ability to “collapse time and chronology,” a power Als aligns with the essay genre itself before suggesting Neel might be considered an “essayist of the canvas,” and a deeply moral one at that. In works such as Pregnant Maria (1964)—where much attention is paid to the fraught, sensual synergy present between seeing and being seen—Neel transgresses the traditional misogyny of the odalisque. The canvas, with its smeared beiges and ghoulish yellows, apprehends a woman lounging easily on a white sheet, clothed only in mischievous shadow and sumptuous daylight. 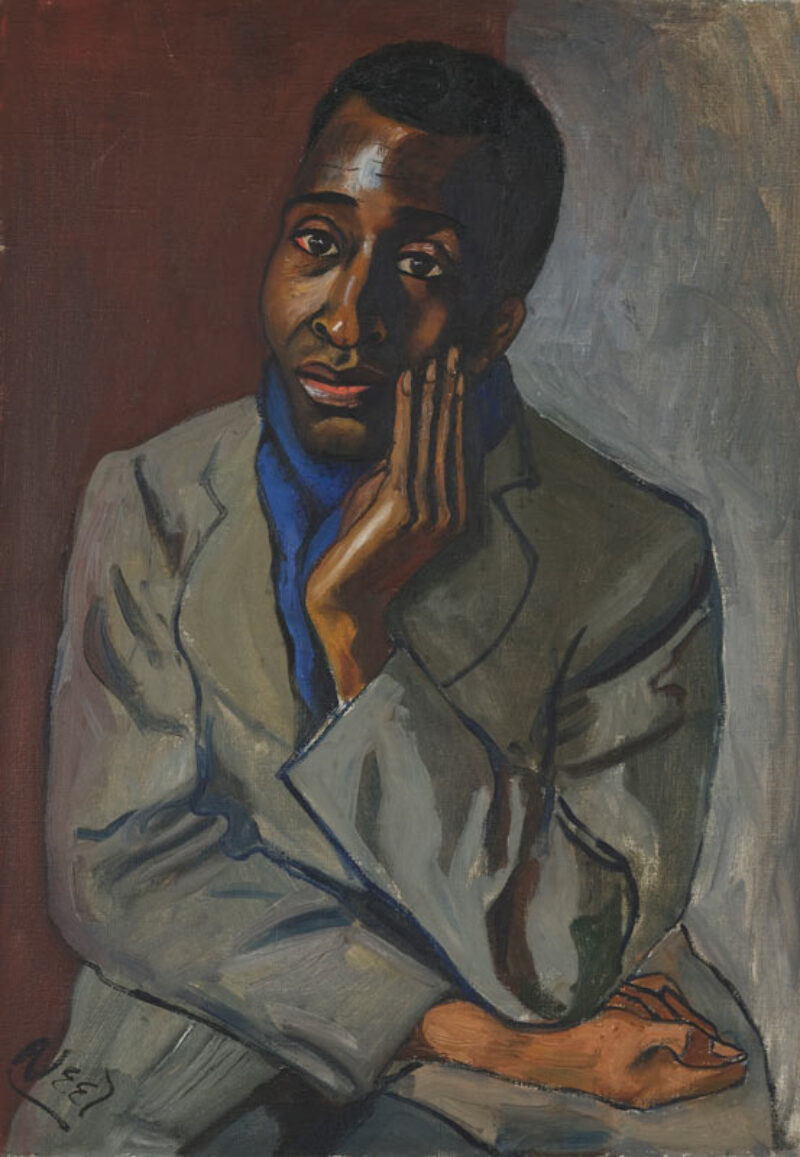 The exhibit spans two gallery spaces and includes photographs, postcards, manifestos (such as The Crisis of the Negro Intellectual by Harold Cruse, whose regal portrait hangs on the wall), albums, sketches, and other ephemera that help contextualize the intellectual voltage running throughout Harlem while Neel lived there. Undeniably, gentrification’s rampant indifference to diversity, its fierce determination to regiment bland and lavish sameness, tinges these paintings with a nostalgia complicated by the pauperism many of Neel’s subjects endured. Neel saw “street painting” as a political obligation, writing in an undated note included in the exhibit that “the nuclear fear that everyone has—the throw away, blow away philosophy caused by the feeling that any day we may be blown to bits, makes the junky present infinitely important.” Neel’s future is now our own junky present, where fears are again cataclysmic. Her celebration of difference, of progressive thinkers and strangers, feels particularly necessary today. That several paintings leave their subjects unidentified—”Spanish Woman,” “Woman,” “Black Man”—feels purposeful, a suggestion that intimate, empathetic understanding is due not only to the named, but also—perhaps even more significantly—to the anonymous.

Zack Hatfield is a graduate student in NYU’s Cultural Reporting and Criticism program. His writing has appeared in the Los Angeles Review of Books, Artforum.com, The Brooklyn Rail, and BOMB.