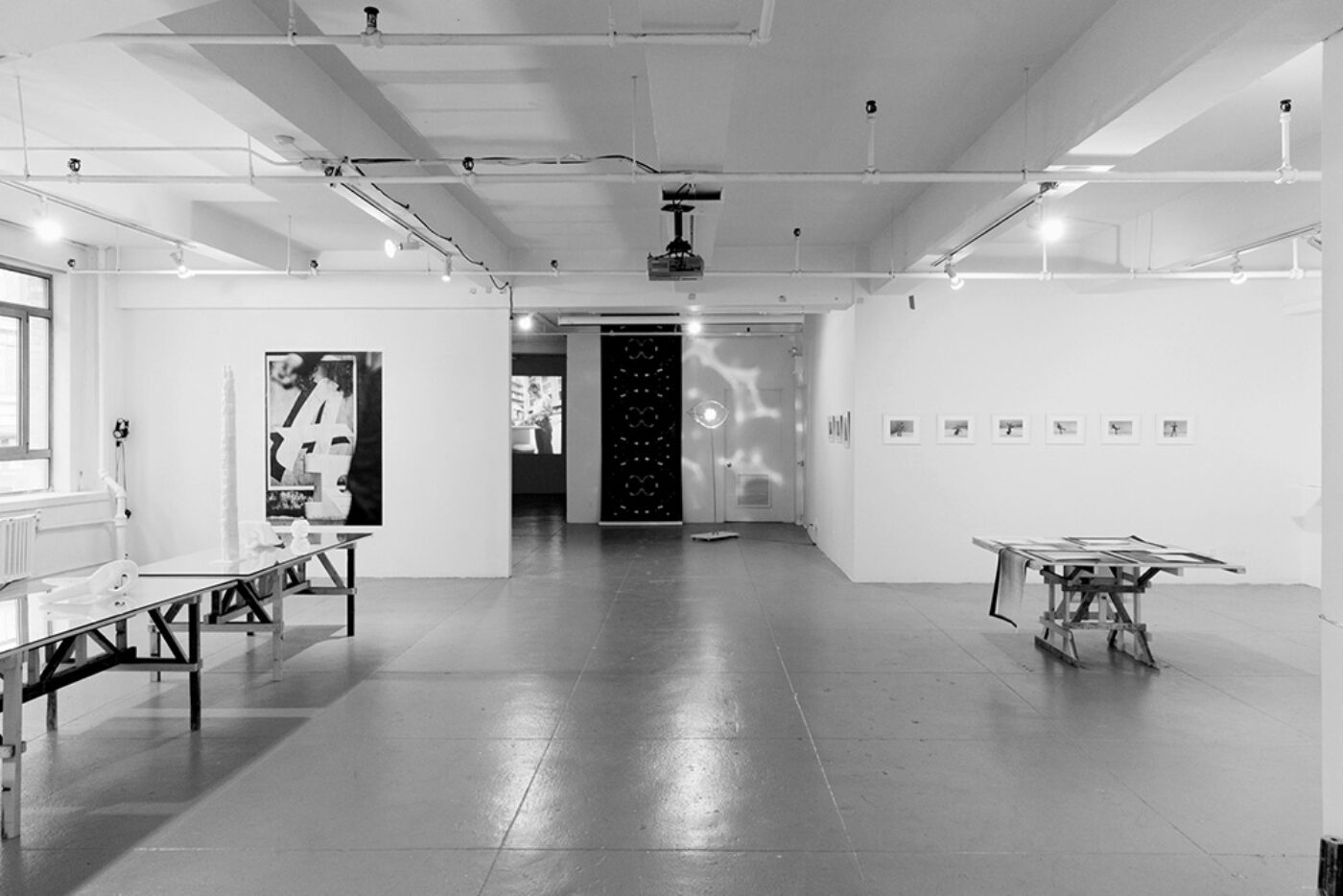 Photo by Matthew Vicari. Courtesy of The Elizabeth Foundation for the Arts.

The Elizabeth Foundation for the Arts Project Space
November 6–December 19, 2015

Questions, extractions … of authorship, origin, and connectivity. Kari Cwynar and Kendra Sullivan’s curation of Accompaniment, a group show at EFA Project Space, is meticulous and airtight—the curatorial statement (a chapbook in itself) is a feat of textual and didactic density that leaves no stone or song unparsed. Yet, thankfully, “[y]ou still have room for wonder” (Henry James via Babette Mangolte). The initial sense of wonder comes from Rodrigo Ortiz Monasterio and Mario García Torres’s audio installation Radio Nancarrow (2015), a loop that includes all of Conlon Nancarrow’s Studies for Player Piano (1942–92) and many related recordings, including James Tenney’s homage Spectral Canon for Conlon Nancarrow (1974). The installation is a paean to Nancarrow, lending companionability to a solitary practitioner. His voice (from an interview) and music is carried over the speakers, happily haunting one’s way through the gallery.

There are spooks in the room: they don’t say much but they like to do weird things with objects. A row of tables with mirrored surfaces beckons. On the mirrors are Duane Linklater’s 3D-printed relics, copies of Native American “ethnographic objects” selected by Linklater from the Utah Museum of Fine Arts, bearing scant resemblance to their originals (i.e., a mask, a headdress, a model of a totem pole). Bled of color, they look like proto-props from a special effects studio or a wayward prosthetics lab, as if made of tripe or bone or melanin-deficient skin (ahem). Leaning over for a closer look, the viewer gets a glimpse of their own reflection and is implicated, loud and clear, in an arrested narrative.

A cyclops overseer by Kara Hamilton, commissioned by Angie Keefer, called Heavy Fixture (2015) is a rather comical entity with a loopy backstory having to do with Hudson River School painter Thomas Cole and his rock collection. The eye of the tall lamp stands sentinel near the screening of Babette Mangolte’s film What Maisie Knew (1975), described by Mangolte as a film “about looking.” Featuring Philip Glass and Yvonne Rainer, it is based on Henry James’s 1897 novel about a child of divorced parents, an origin story torn asunder, of people not communicating well or losing each other. Mangolte’s reverent series of photographs Yvonne Rainer in “this is the story of a woman who…” (1973) wraps around two adjacent walls, so Rainer’s presence is both animate and static, in conversation with itself. The relationships are real and chimeric here, and throughout the show. Tanya Lukin Linklater’s Yup’ik dance fans (made of grass and caribou beard) are at uneasy rest nearby, tucked away (or abandoned) on the floor underneath a wooden bench, but they appear to breathe.

Sarah Rose and John Liddell’s Rumour 2 (2015)—a transparent snake winding its way along a wall, surgical and umbilical—wants to come alive but can’t. The gallery attendant says that the tubing is intended as a conduit for air bubbles in water, but the vision fails to materialize and the piece remains dormant: vascular fake kinetics. Rose’s three works on paper, Passing Notes (2015), have a gentle heft to them that offsets the alpha(betic) bravado of Shannon Ebner’s High Line-commissioned collaboration with David Reinfurt from 2014–15, A Hudson Yard.

Curators Cwynar and Sullivan have built the show on a love nest of friendly discourse, including the letter of invitation they sent to the artists (from multiple countries) asking them to participate. After leaving the show, I send my own letter to one of the artists, Duane Linklater. Our exchange makes room for wonder …

Duane, hello. In my dream last night,
I asked you why you chose to place
the 3D-printed objects on mirrors.
I cannot remember the answer.
Maybe there’s nothing to know.
Maybe I already know.

dear charity,
i wish you remembered the response and then i would know.

Charity Coleman is the author of Julyiary (O’Clock Press, 2015), and the forthcoming Diary of the Erstwhile Present. Her work can be found in Dolce Stil Criollo, Joan’s Digest, No, Dear, and elsewhere.