Abbas Kiarostami’s The Wind Will Carry Us by Minna Proctor

Tucked onto a rocky shelf, halfway up a mountain, on the far side of an endless range in Iranian Kurdistan, sits the village of Siah Dareh. In a tiny room, perched on top of a stacked clay cluster of buildings, Mrs. Malek, the village elder, lies on the brink of death. One hundred years old, if she’s a day, Mrs. Malek is tended to by the people of the village: they stand watch outside her door, pray for her, and bring her soup. If she eats someone’s soup and gets better, then the person who made that bowl of soup will be blessed. If she dies, there will be a ceremonial mourning. While the people of the village try to keep their elder alive, they unwittingly host a team of three men sent from Tehran to wait for Mrs. Malek to die so that they can document an old-world grieving ritual. The team grows increasingly uneasy as Mrs. Malek’s health improves. They are trying to keep the macabre and irreverent nature of their assignment a secret by pretending that they are archaeologists looking for buried treasure in the old cemetery up on the hill overlooking the village. It’s a waiting game that tests notions of tradition—those who live it against those who observe it; the insensitivity of modern anthropology against the unforgiving inevitability of the life cycle.

The Wind Will Carry Us is the latest work of Iranian director Abbas Kiarostami, whose extraordinary 1996 film Taste of Cherry won the Palme d’Or at Cannes. If you’ve been waiting, The Wind Will Carry Us is Kiarostami’s Godot—and I draw that parallel not for lack of a better one, but because there is none more perfect—it is a crowning achievement, and a vexing delight. Like Beckett, Kiarostami’s minimalist sensibility is wrapped up in nuanced, weighted, artful language. Language that is as visual as spoken. Majestic landscapes stretch the limits of the screen, timeless, impenetrable. The camera follows a stream of thought rather than cinematic conventions—we watch a character looking, rather than see what he’s looking at. Kiarostami’s plots are situations, conflicts that swell to bursting rather than resolution. His films are infused with a forcefully articulated philosophy of film, both a rare and seductive trait in a contemporary filmmaker. In interviews, he speaks heroically of challenging the audience rather than delivering to them: “In cinema’s next century, respect of the audience as an intelligent and constructive element is inevitable. To attain this, one must perhaps move away from the concept of the audience as the absolute master.” For all the questions the film provokes, there are answers—ambiguous, conflicting though they may be—therein. It’s challenging work that pays off, with the explosion of synapses, the thrill of engagement.

The Wind Will Carry Us, a New Yorker Films release, is now playing in New York and will travel to other cities later this year. 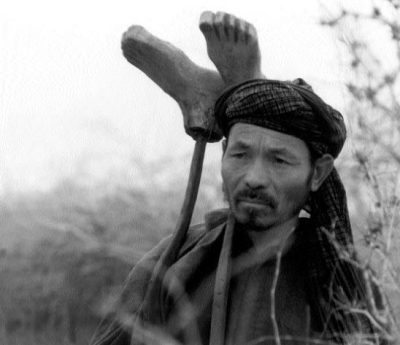