On the day of POTUS 45’s inauguration, alt-right front man Richard Spencer was punched in the face during an interview for Australian television. The punch landed on the right side of Spencer’s face, causing him to fall to his left. The unknown assailant fled the scene, but his action left a media mark. The video went viral on YouTube, Facebook, and Twitter, as well as on broadcast news. Not long after, edited versions set to music began to appear. In one, the interview audio was dubbed with the 1979 song “Love Will Tear Us Apart” by Joy Division, the iconic Manchester postpunk band. Other versions replaced the audio with Radiohead’s “Just,” Rage Against the Machine’s “Guerrilla Radio,” Solange’s “Rise,” New Order’s “Blue Monday,” and Wu Tang Clan’s “Bring Da Ruckus.” Significant here is the way sound displacement reinforces the visual, in this case, the punch—the precise moment in the video that represents the climax of the narrative and the part of the story where resolution is achieved.

French critic Michel Chion’s Audio-Vision: Sound on Screen considers the various roles of sound as background music, dialogue, effects, and so on. He theorizes how sound affects and alters the viewer’s perceptions and emotions and describes the frame—the screen, the monitor, etcetera—of the image as a “container” inside which all the visual elements of a film must sit. This visual frame, or container, Chion argues, creates boundaries and imposes limits.

By contrast, sound has no such limits. One can use it on- or offscreen, diegetically or nondiegetically, and it can be layered over and over again. While it has no limits and, therefore, no container, sound is necessarily suspect when we do not know its origin. Yet this is precisely the source of its power and interest. Chion speaks of the image as a “magnetized” element for sound. The image “magnetizes” a sound element within the frame, creating a visualized sound. The repetition of the punch in lockstep with the drum track exemplifies the complexity and power of sound in its nondiegetic limitlessness.

Where does this leave us regarding the music video iterations of the alt-right spokesperson’s altercation? In our view, these videos are part of the history of media interventions and artist projects using strategies of sound and image displacement in which two disparate elements are brought together to create a third meaning. In the example of the video edit using the Joy Division song, we see the punch repeatedly and hear it land to the beat of a snare drum in a 4/4 time signature. This has the effect of reinforcing and amplifying the moment, and, in Chion’s phrasing, “magnetizing” the sound to the image for a greater perceptual experience. It creates an accumulation of the event, increasing the number of punches one beat at a time. 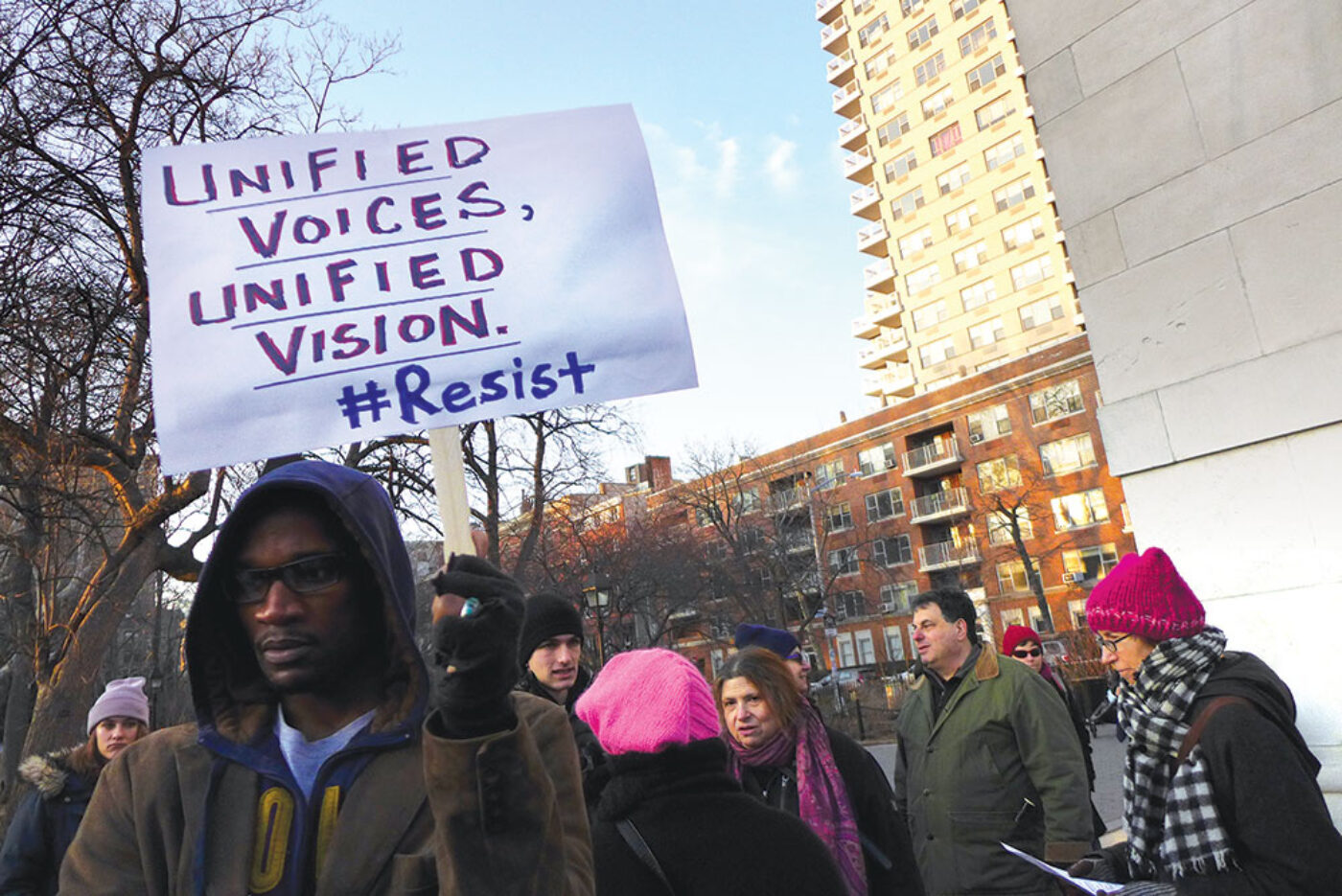 “This is What Democracy Sounds Like: A Community Sing-Along for Freedom,” February 5, 2017. Images courtesy of the artists. 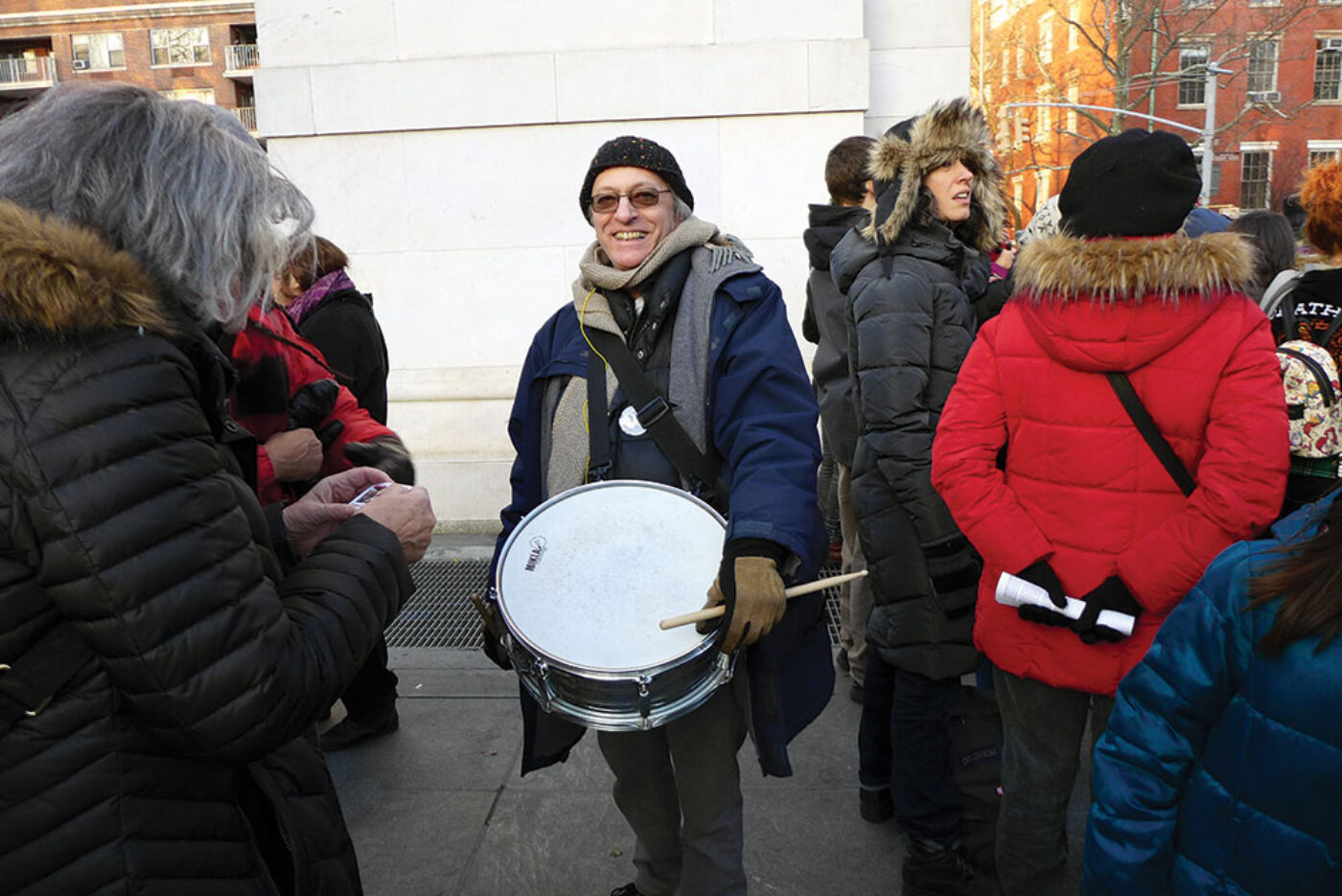 “This is What Democracy Sounds Like: A Community Sing-Along for Freedom,” February 5, 2017. Images courtesy of the artists.

“Republicans seized her microphone. And gave her a megaphone.” Thus read the first two sentences of a New York Times article about the recent silencing of Elizabeth Warren on the floor of the United States Senate when she attempted to read a 1986 letter by Coretta Scott King that criticized then nominee for Attorney General Jeff Sessions during his confirmation hearing.

The power to silence someone demonstrates the political force and value of the sonic. Seizing a speaker’s microphone hinders both the power of their voice and the potential of the listener’s curiosity or response. “What hit me the hardest was, it is about silence,” Warren told the Times. Clearly, the move was intended to silence Coretta Scott King as much as Warren, a voice from the past whose message continues to reverberate today. 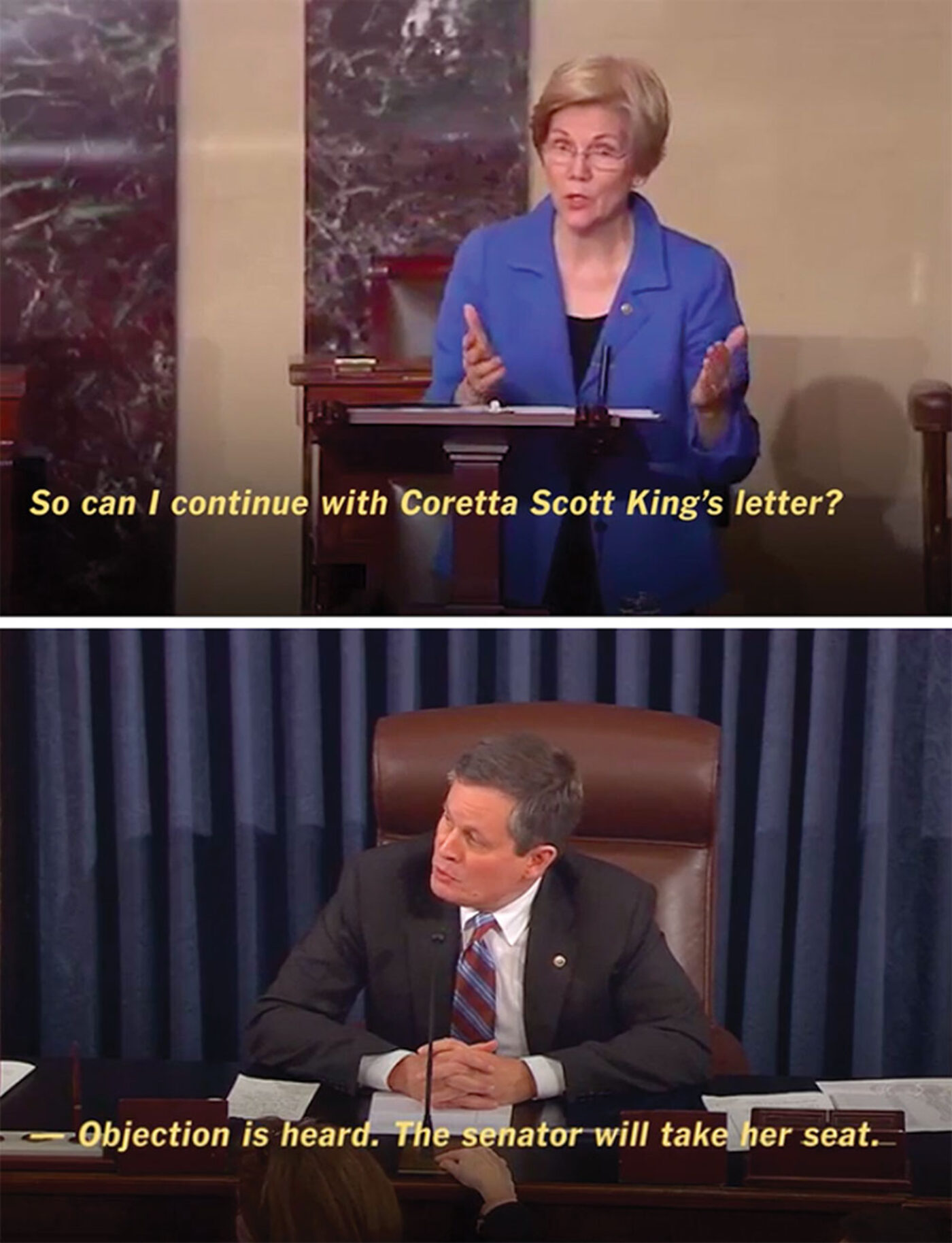 Elizabeth Warren being procedurally silenced on the floor of the United States Senate.

Since we cannot close our ears, listening is halted through silencing. Theorists of sound write about listening as an attentive and thoughtful activity that unites physiological and mental processes. Sound artist Pauline Oliveros describes listening as a cerebral mechanism that goes beyond hearing, entailing a deeper auditory process. Listening takes effort and requires compassion for difference. Those in the present are asked to listen to the past and hear the concern of its voices. Relationships are established, histories reverberate, memory is reignited. 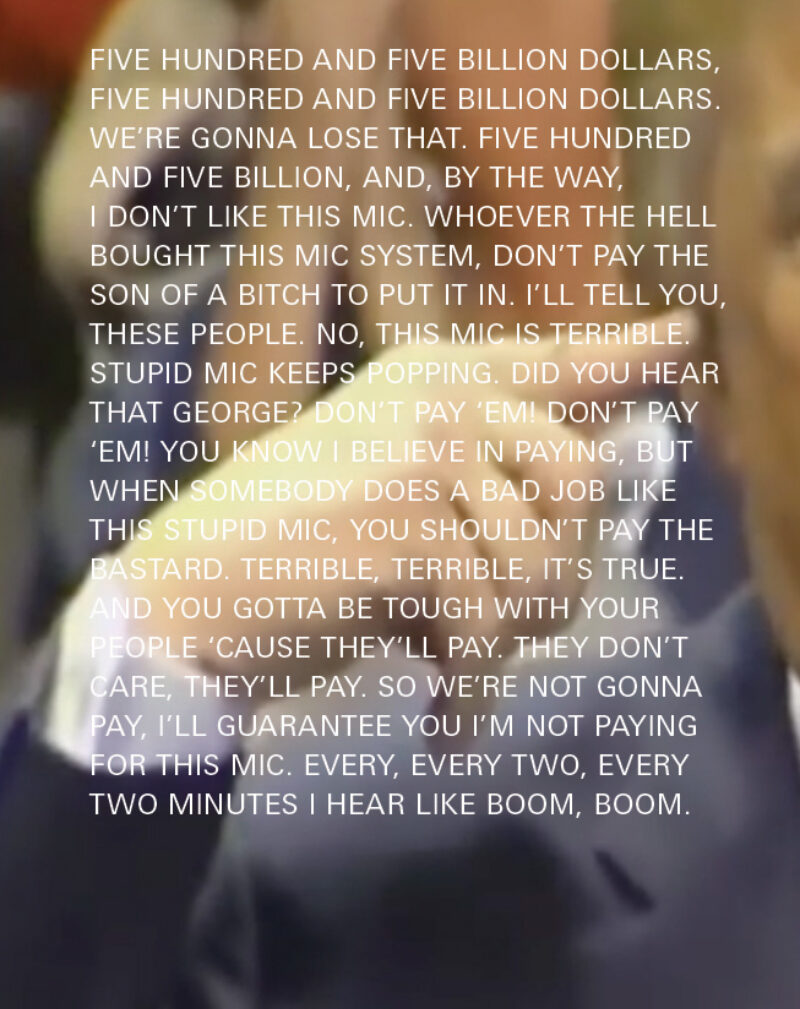 Angel Nevarez and Valerie Tevere are multidisciplinary artists whose work has been exhibited at the Museum of Modern Art, the Museo de Arte Raúl Anguiano in Guadalajara, Mexico, the Institute of Contemporary Art in Philadelphia, and elsewhere. Nevarez is a musician and Faculty in the MFA Fine Arts Program at School of Visual Arts, New York. Tevere is Professor of Media Culture at the College of Staten Island, CUNY.