A Light Goes Back On: The Art of Michael Alan by Emily Colucci

Growing up in a very different New York from the one we know today, artist Michael Alan saw the city in all its transformative glory. Emily Colucci explores the realism of Alan’s inner and outer worlds. 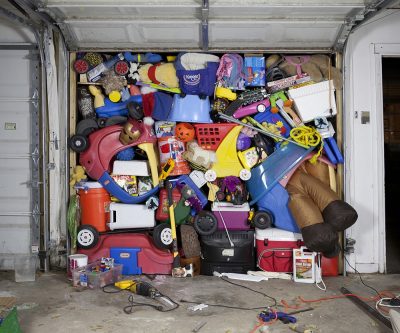 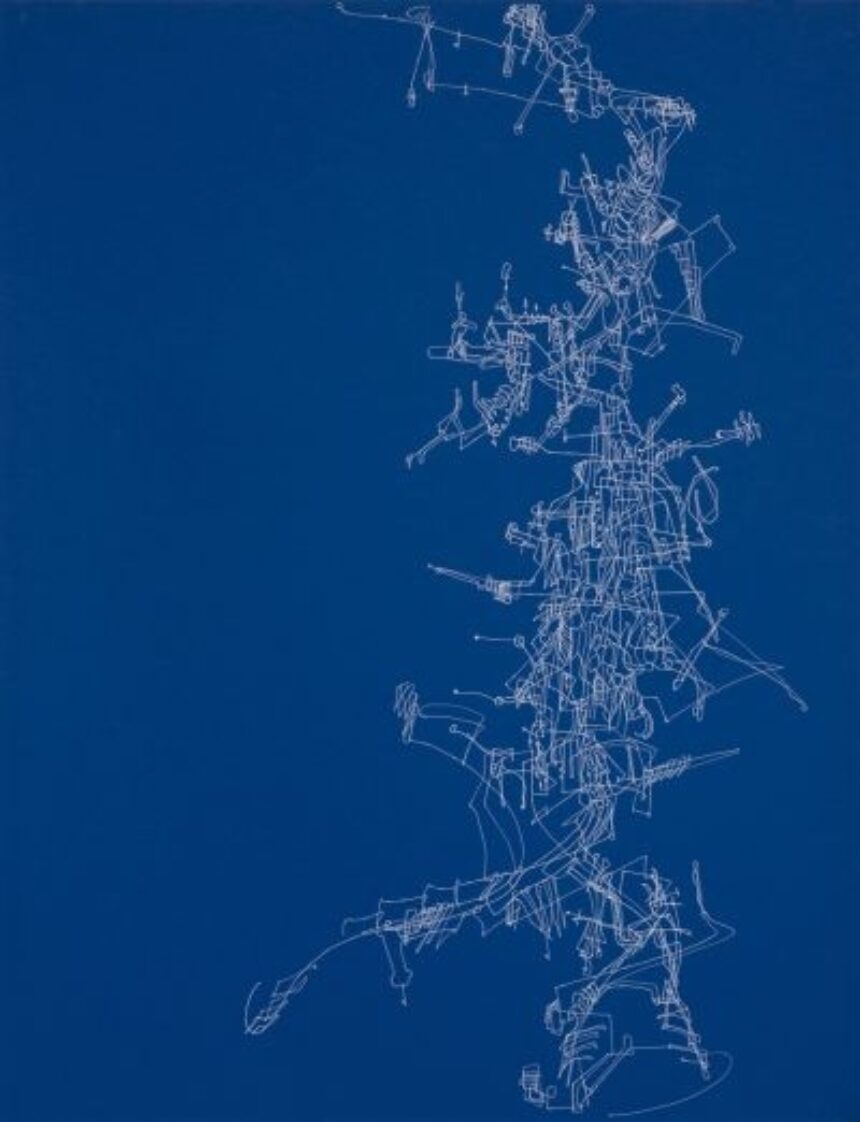 Born during the 1977 blackout, artist Michael Alan follows in the footsteps of New York artists who often employed and celebrated the dark conditions around them.

A lifelong New-Yorker, Alan was born in Bushwick before it was an artistic community. After moving from Bushwick, Alan was raised in different places around the city, finding himself living next door to the Wu-Tang Clan one instant, and then in Queens the next.

While growing up in these various locations, the artist lost three of his best friends and came close to losing his own life on multiple occasions. Alan, from his earliest years, began making art as a means to escape the danger around him. Alan explains, “I found it to be a struggle to be positive because everyone around me was negative. So I was the guy who drew everything all the time and that’s what I was known for. As I got older, people respected that.”

By becoming “the guy who drew everything,” his art often saved him. A positive force in his own life, Alan now creates art that acts as an example that one can endure and transcend difficult circumstances.

Alan’s work, from the simple skeletal line-drawings to the more complex collages and paintings to Living Installation (Alan’s live art piece where performers become art objects using any material possible), advocates for a celebration of life’s twist and turns.

From the most basic line drawing, Alan takes inspiration from his own New York memories to turn traumatic experiences into positive creations. The drawing Tunnel derives from the tunnels he played in as a child when he was living with his aunt in Sisters of Mercy, a convent in Fort Greene known for being in Julian Schnabel’s film Basquiat. His aunt suffered from Alzheimer’s disease and frequently did not remember his identity. As he meandered through the tunnels, Alan constantly ran back to his aunt to see if she recognized him. A winding labyrinth of lines, Tunnel stands as an example of how Alan turns experience into pure creativity.

The constant movement, change, adaptation and destruction of the city is reflected in Alan’s work. Even though the viewer may not recognize it upon first glance, Alan makes detailed calculations with the lines, colors, collage, dots and splashes that are specifically placed to reflect change.

Noting the inevitability of change in both life and his work, Alan observes, “I’m more of a realistic artist than anything else because life always changes on us. I’m trying to embrace that rather than trying to reject it. It’s something that’s definite and we have to accept it. Change is definite, but that doesn’t have to be a bad thing.” 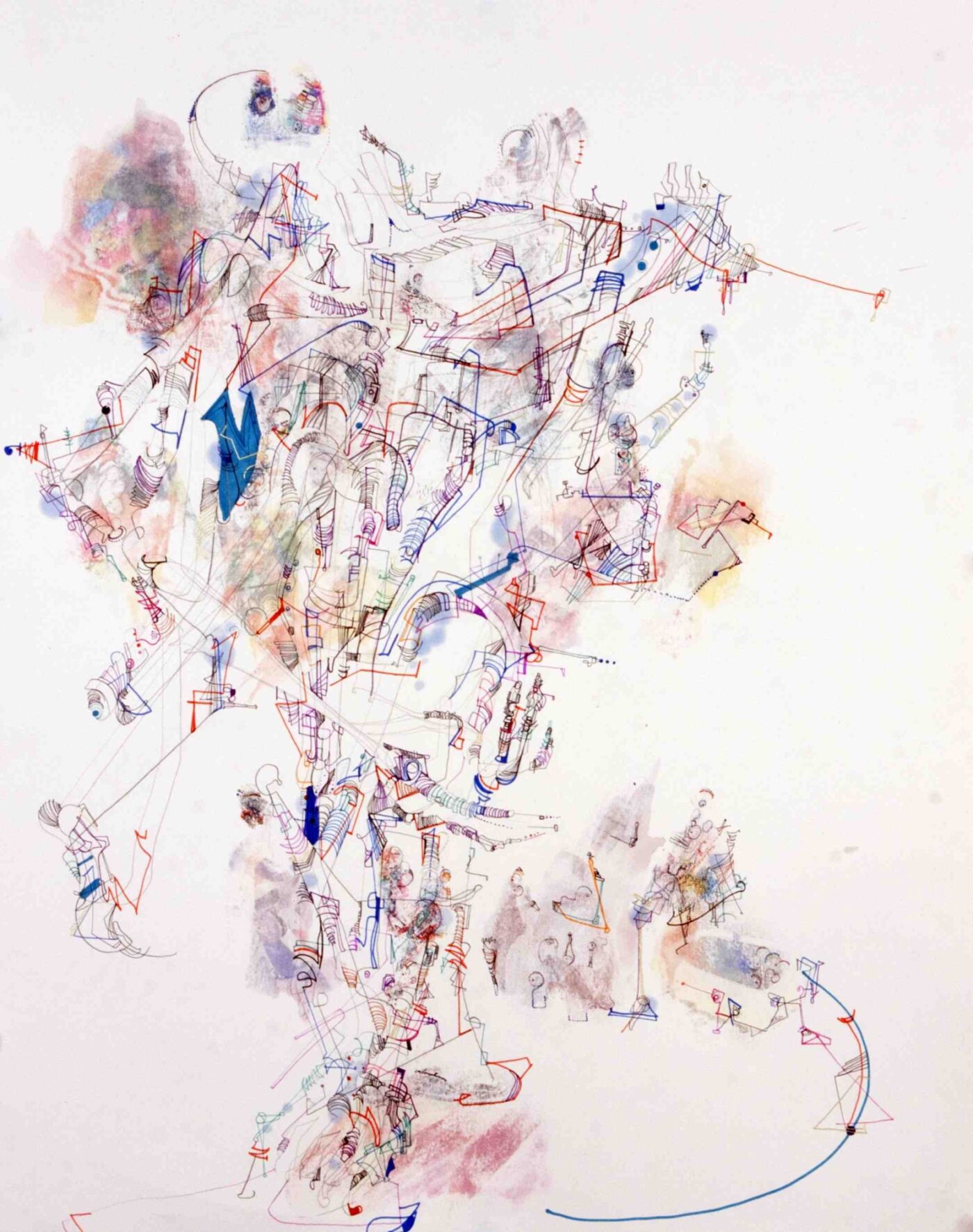 One of Alan’s main interests is using any unexpected materials he can get his hands on. With simple materials—markers, cheap pens, garbage, kids’ tools, oil paint, and more—the interaction between these materials pushes the boundaries of what is possible in his work. Embracing these random interactions and pressing them to the utmost limit, Alan discovers the changes in these combinations.

Representing not only the changes in the outside world but also within, Alan also creates drawings that reveal the inner workings of the body via watercolor. In works such as Grasper, the surfaces of the drawings document the constantly evolving worlds inside the figure.

This continually changing image and process begins to assert the importance of living in the present. Growing up in uncertain circumstances with friends who could die at any time and his own life perpetually in danger, mentally staying in the present became a necessary tool of survival. Advocating for living for the moment, Alan translates these beliefs to his art. 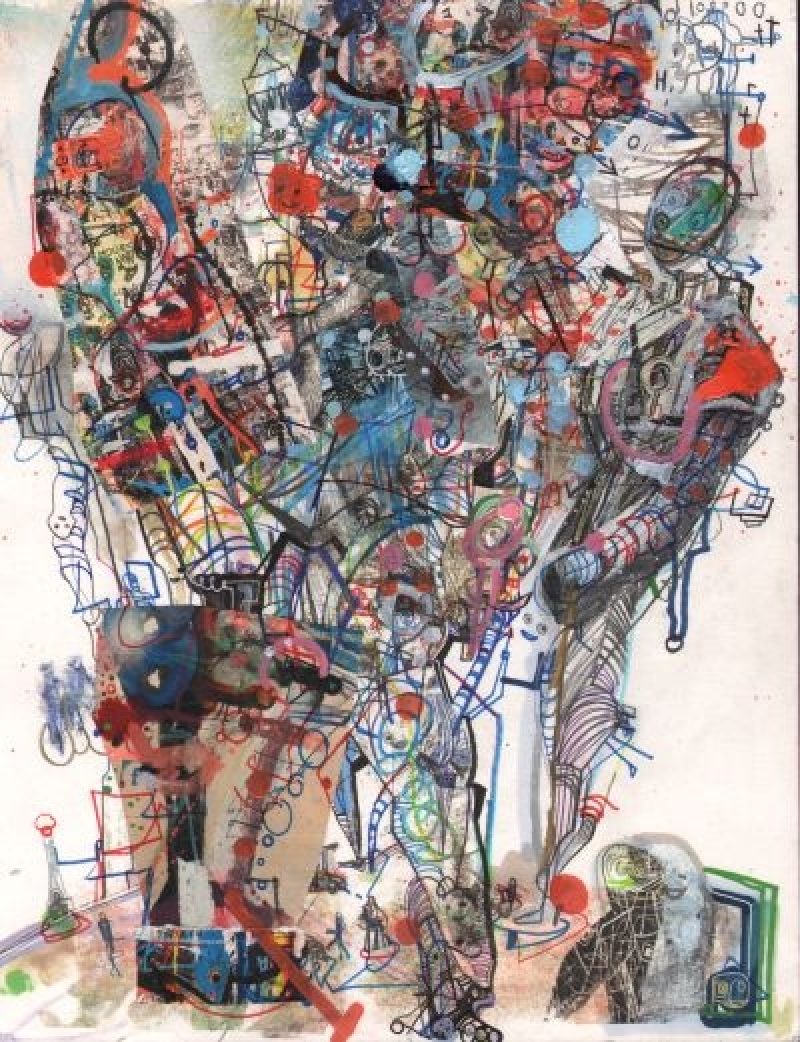 In the heavier collaged drawings and paintings such as Zebra or Snowglobe, Alan uses his own old drawings and pastes them into the work, disrupting the notions of old versus new. With the past, the present, and the future no longer relevant, each drawing and painting can only exist in the moment that the viewer sees it.

These works are composed of a multitude of smaller possible works that harmonize in a balanced image. By having many pieces in one work, the viewer is able to see each part differently, depending on their point of focus. Mixed with the techniques and the disparate materials, the viewer’s engagement with the image constantly changes; every time a viewer looks at a work, there are different faces, lines or swirls. 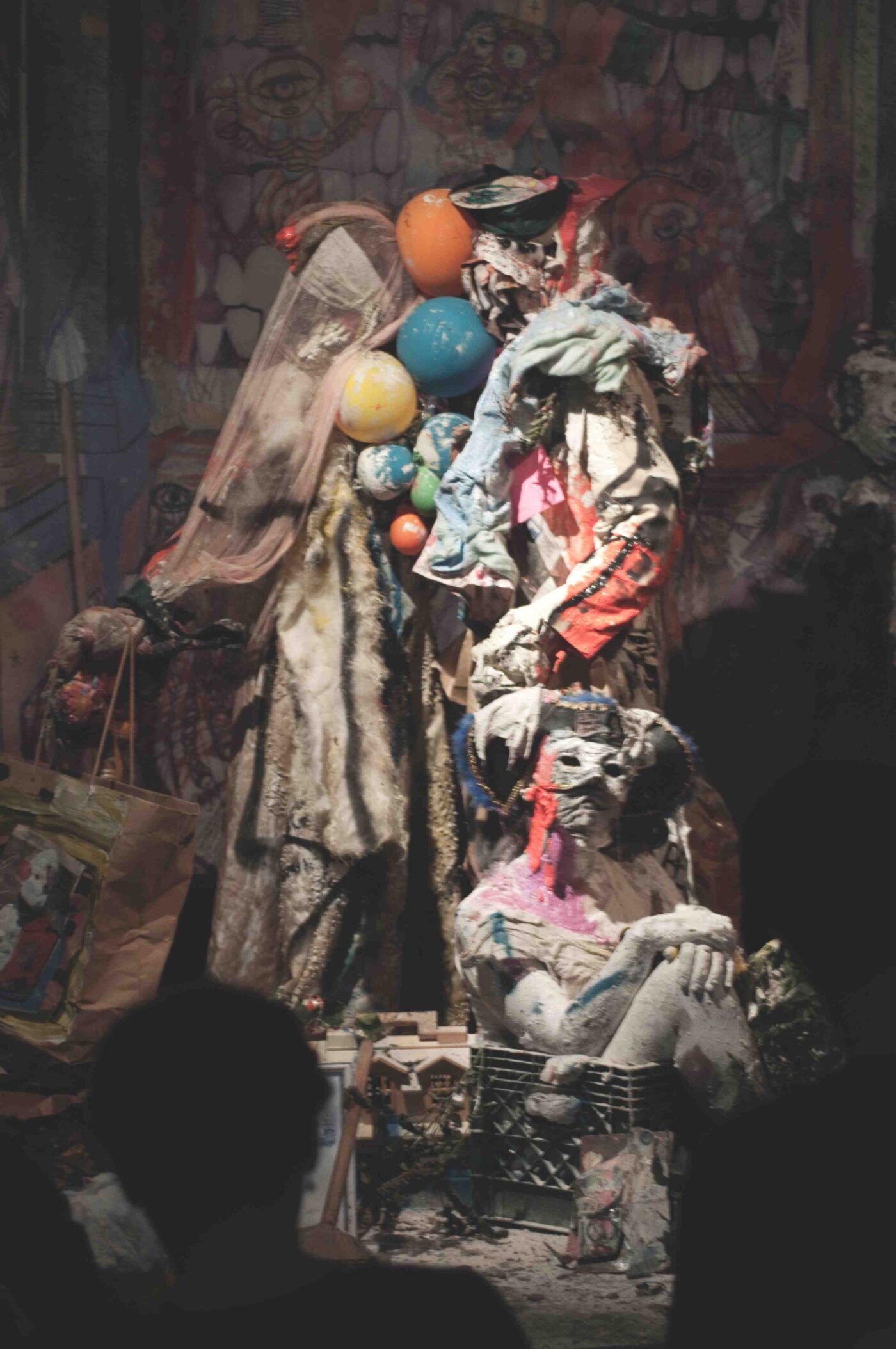 In addition to his studio work, Alan gleans inspiration from his two-dimensional drawings and paintings and puts on live art pieces entitled Michael Alan’s Living Installation, where he turns people he meets in his life into living art objects using paint, copied prints of his own work, clay, dirt, fabric, masks, spray paint and any other material available. The drawings, collages and paintings completed in the studio influence the choreographed motions, look and feel of the performers bodies. Living Installation is Alan’s version of live animation, taking the energy and appearance of his drawings and paintings and bringing it to the public.

Much like Alan’s two-dimensional works, a celebration of change and creation through chaos translates to the live performances. Reflecting the wide range of New Yorkers—a collectors, a gallery owner, a kid from the projects—the performances allow audience members to witness constant changes in the materials and in the performer’s bodies: paint slowly dripping off of a performer’s mask, or the slightest movement of a performer’s hand. Each moment in the Living Installation is unique. 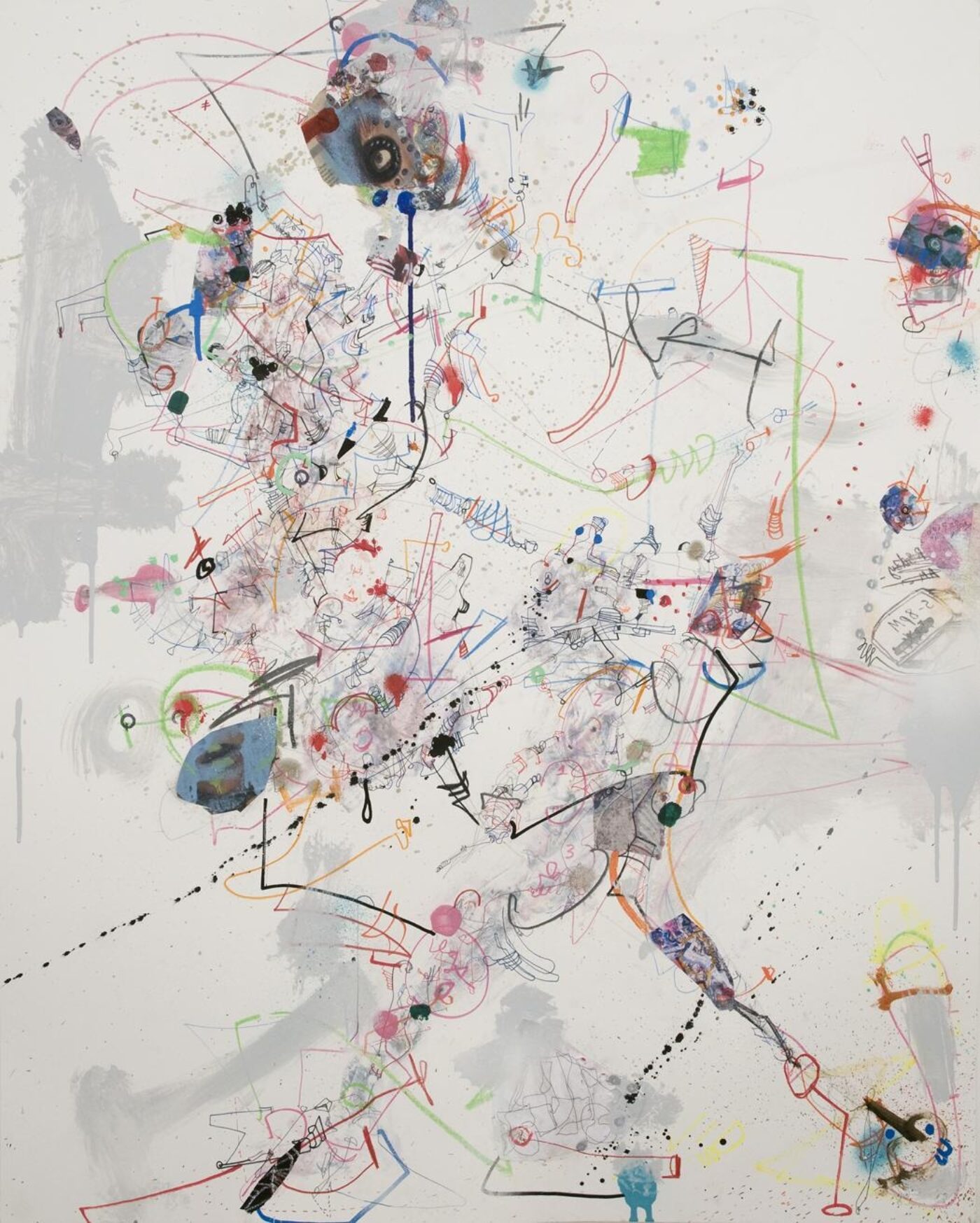 Living Installation proves that, much like Alan’s survival through art, performers can create out of difficult circumstances. Standing, moving, painting, working for hours on end, the Living Installation stresses endurance on the bodies of the performers (and the artist), becoming a testament to how far one can push oneself as an artist or as a person.

After Living Installation, Alan takes the detritus (paper, masks, objects) and turns it back into two-dimensional art as seen in Occupy Yourself, which uses elements from past Living Installations in drawings, paintings and collages. Alan’s ongoing creative process comes full circle, creating a range of works with the ability to reflect not only the world around us, but that which lies inside us, as well.

Emily Colucci is a freelance art writer and a regular contributor to Hyperallergic. She also works at Sikkema Jenkins & Co. A recent graduate from NYU, she wrote her Master’s thesis on Fashion Moda and Colab, focusing on New York graffiti and street art from the 1970s and 1980s. 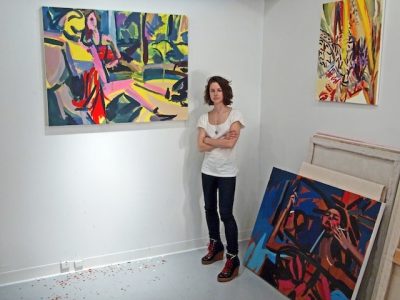 Bryn McConnell toys with color, line, expression, the canon—both on and off the canvas. 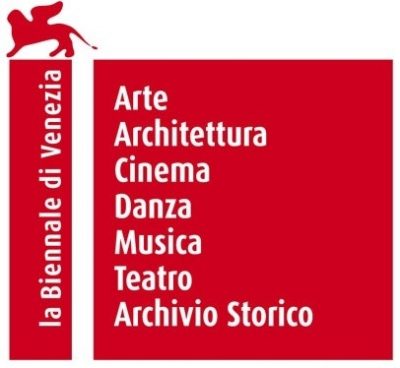