A Day in Brasilia  by Carlos Brillembourg 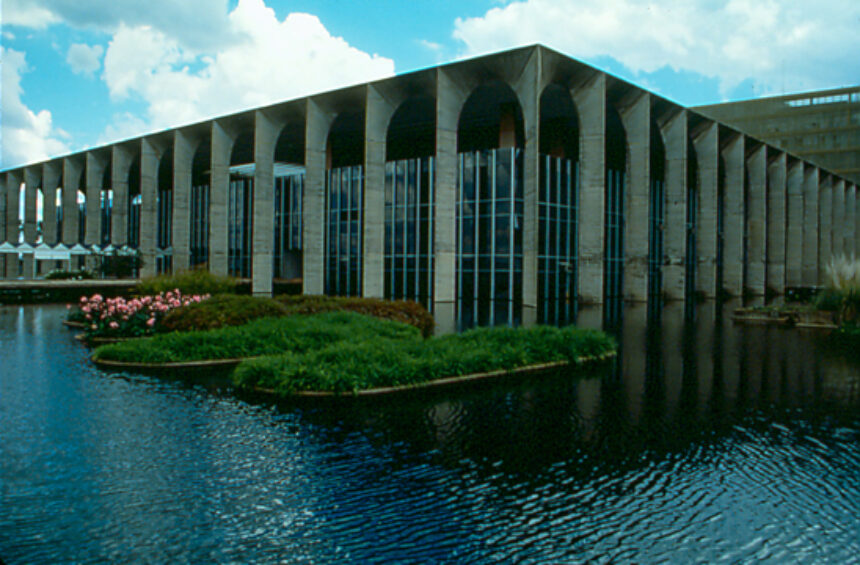 Brasilia. All photos by Carlos Brillembourg.

In 1956—shortly after his inauguration and before launching the competition for the new capital—Juscelino Kubitchek de Oliveira, president of Brazil, asked his friend Oscar Niemeyer to design and begin construction on the future presidential palace just outside the main axis of the future capital: the sublime Palace of the Dawn. In this way, Brasilia, the only world capital built during the 20th century, was born.

When Yuri Gagarin, Soviet cosmonaut and the first man in space, arrived in Brasilia he said, “I feel as if I stepped on the surface of another planet.” The low-lying cloudscape, the strong horizontality of the grassy plains are broken only by a sporadic sprinkling of trees and lakes. You feel you’re on the dome of the earth. Brasilia is the only modern city founded on the most orthodox precepts of modern architecture as dictated by Le Corbusier. Now that Brasilia is almost 50 years old, we can look at it as the perfect archaeological cultural object of our century. The city contains all the utopian aspirations, as well as the supreme failures of this socialist experiment. Above all, in the central spine of the ministry offices, this hauntingly ethereal vision evocative of hidden and secret symbols remains intact. 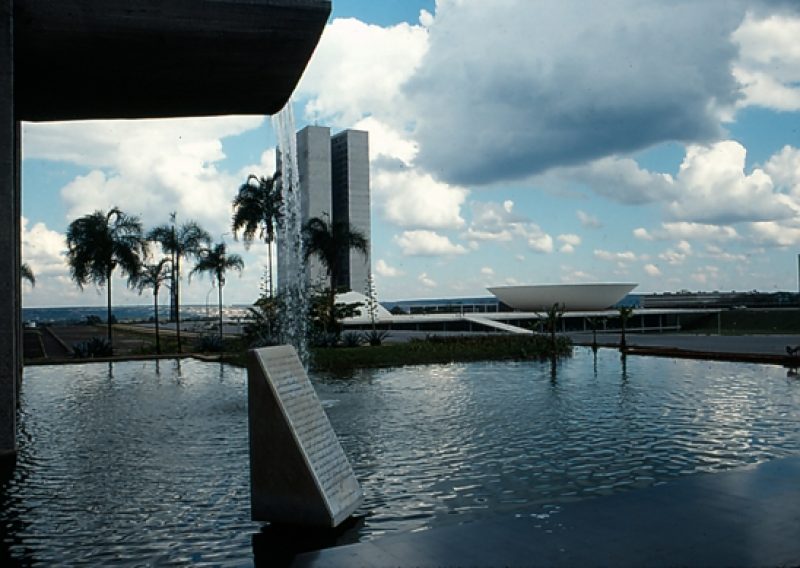 The center is empty. It was Ludwig Mies Van der Rohe’s concept of “universal space” that inspired Niemeyer. This emptiness in Brasilia is the clearest example of how the desire for a “tabula rasa” (not as in a blank slate, but as according to the Sanskrit, a plane of essence) as the foundation for a new architecture could only exist on paper. Here in Brasilia, this idea is moved forward into a real space and a real city. Its infinite vista—first seen in Vaux le Vicompte and then perfected in Versailles—is superimposed on the universal and abstract space of Mies. The result is an empty city built on a “higher plane” from which we feel that we are always looking at the horizon. Within this horizontality, the monumental government buildings, symbolic of a new country, are modest interruptions in this powerful, almost extraterrestrial, landscape.

The infinite expanse of the landscape, and the fluid movement through its highways—overpasses without traffic lights—is interrupted by the repetitive alignment of identical government high-rise slabs reminiscent of Ludwig Hilberseimer’s ideal city projects. Here I am also reminded of Teotihuacán, mixed up with Leonidov’s Dom Narkomtjazjprom 1933 project on Moscow’s Red Square. A monumental axis with open space in the center frames a large elevated platform; then we find a ten-meter separation between the office slabs, oriented east-west in alignment with the sun. Here, elevated on the ground plane, are two half spheres. One is occupied by the senate and the other, inverted and much larger is occupied by the Chamber of Deputies. 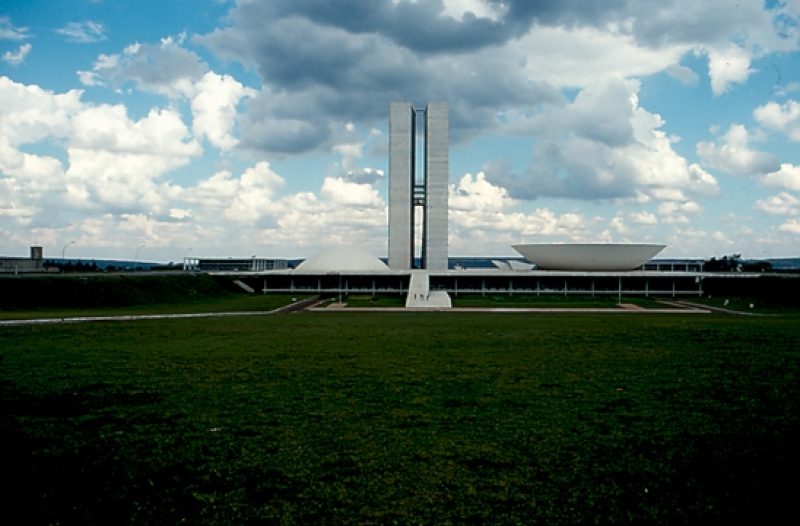 The extreme contrast between Rio de Janeiro and Brasilia is not fortuitous. In designing a city that looks like an airplane from above, Lucio Costa and Oscar Niemeyer used the intersection of two axes as the basis for being unbounded by physical constraints, capable of expanding endlessly into that horizon. Brasilia, which was designed for a maximum of 700,000 inhabitants, has more than 1.5 million inhabitants today and seems to be growing rapidly with the incorporation of satellite cities on its periphery. The result is a population that is spread out and dependent on the automobile to such an extent that plans have been drawn up for a mass transit rail system to alleviate the enormous surface traffic generated by this obsolete urban strategy.

Juscelino Kubitschek said at the opening ceremony, “[Brasilia is] more than a mere aesthetic trend, and above all more than the projection into our culture of a universal movement, a solution which takes carefully into account climate and scenery, perhaps the most original and precise expression of the creative intelligence of modern Brazil.” I believe that Brasilia, in its planning and as realized in its buildings designed by Oscar Niemeyer, is an original work of art. It is perhaps the only original 20th-century American work that surpasses its European antecedents, pointing the way to another vision of architecture rooted in a very American conception of modernity and realized by the adaptation of its utopian vision to the benevolence of its climate in the plains of central Brazil. 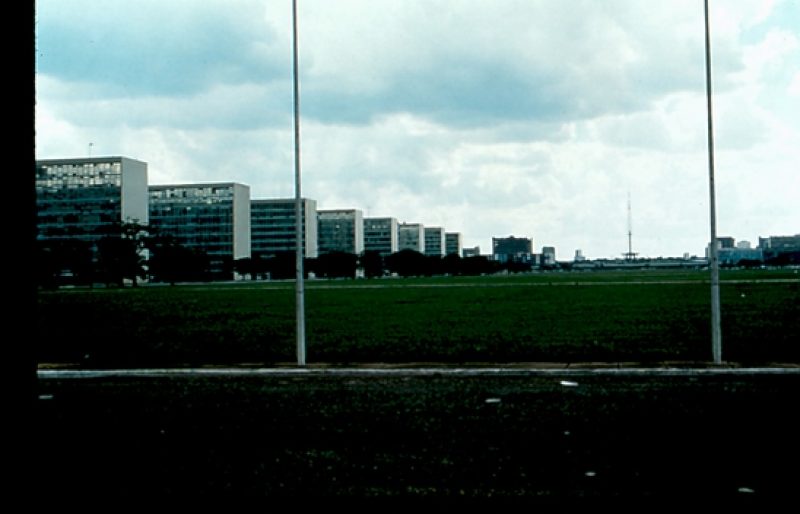 Today the intelligence that Juscelino Kubitschek cites has been encoded in the cryptic spatial relationship of Brasilia’s abstract monuments. These mysterious and secret readings of the city have given rise to numerous cults devoted to looking at Brasilia as a kind of “psychic uplink” to outer space. Brasilia is seen by these groups as a 20th-century Stonehenge that not only functions in alignment to the sun and stars, but provides clues to the most obscure set of geometries that originate in pharaohic Egypt.

Brasilia was built by transporting all the material by airplane in 1957, and completed by the time Kubitschek left office in 1961. First populated by reluctant diplomats and government bureaucrats, this Instant Metropolis has something in common with other world capitals that came into existence in the same way: Washington D.C., Canberra, Australia and Vijagannagara, India built by the Hindu Empire in the 14th century. They all express the desire to dominate a large territory through the strategic placement of monuments over a spacious, natural context; it is the coexistence of the landscape as redefined by the monuments that communicates the sense of power that is the essence, or rasa, of the city. 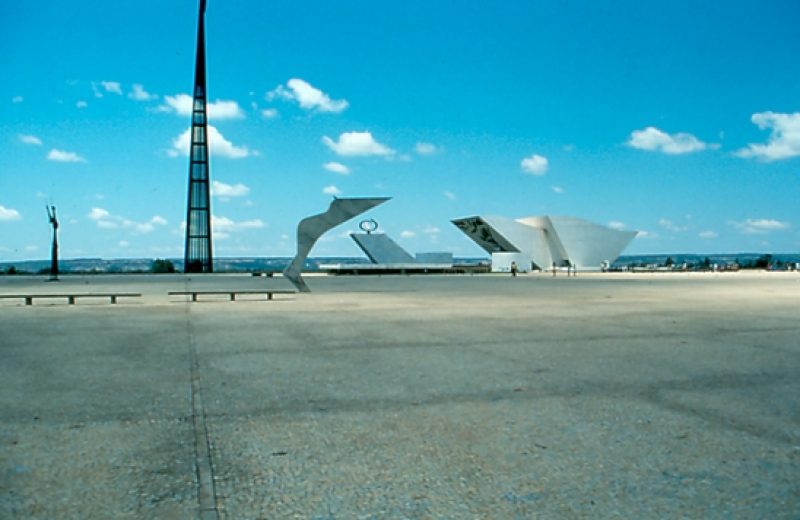 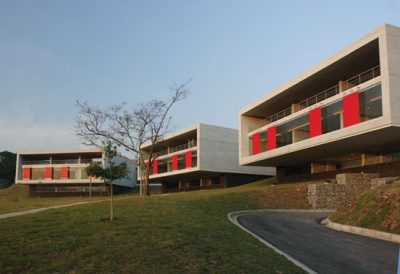