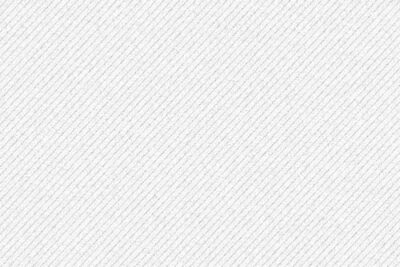 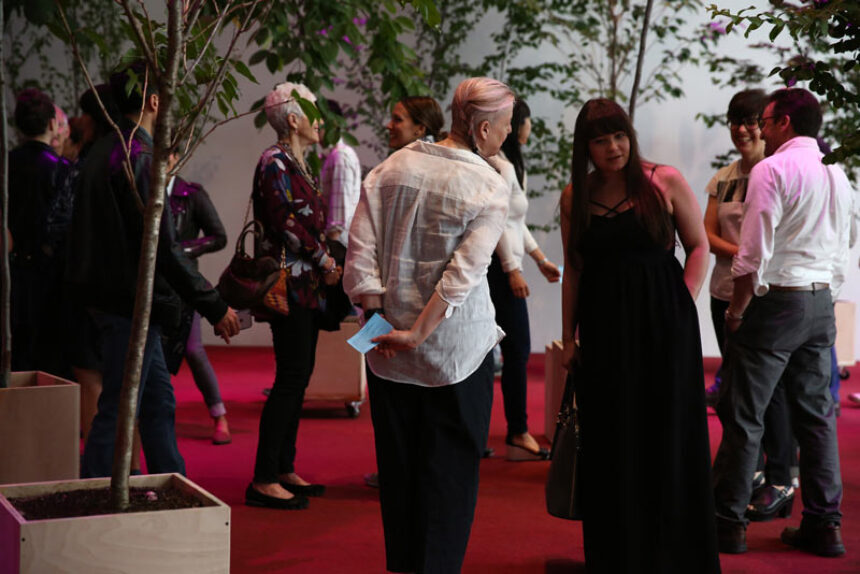 It happens like this: you enter the bright room on the west side of the sixth floor of the Whitney Museum of American Art. You are among young trees, twenty-six of them, growing from wooden boxes raised on casters, spaced out around the room; the floor is red carpet, the light a mix of sun from the windows and a magenta glow from the bulbs on the ceiling. You may have a moment to look around, or you may be approached right away by someone who says: Find a furrow in your sleep. Or, The ridge. A ladder asleep against a house. Or, That went, This was our planet, a past tense. Then the speaker moves right on, and someone else catches you by the elbow: all night in when down when joy down oh when. Or, Given the recent turn of events, it might have resisted blooming. You might start to seek these people out, to gather more lines, but before long a chime sounds and the readers, who have been circulating freely, form a circle in the center of the room. You count fourteen, if you count. Facing outward, they recite a poem—that’s what the fourteen lines add up to, now they are in order, though each is still in a different voice, moving slowly around the circle. Then the circle of fourteen turns inward, and there is the poem again, this time read faster, as though the lines were the utterance of a single speaker. Then one more time, all at once, the lines on top of one another; and then the circle dissolves. A reader approaches you again, with a new line from a new poem.

It happened like this if you were in the Whitney on the first Sunday afternoon in June, 2017, and you wandered into the space of Asad Raza’s Root Sequence. Mother Tongue. The trees, the totem-objects placed at their bases, and the caretakers who had been tending them for two months—all were regulars, but Raza also invited a collection of weekend guests to inhabit the room for a few hours each. The 14 Person Poem took up the invitation, bringing a group of poets and readers together for a collective experiment in sharing a poem in physical and social space. Eight poems were written for the occasion, a new one for every quarter hour of the two hours the event lasted. The fourteen readers in the room at any given time knew only a single line of each poem, and were charged with sharing it with as many visitors as possible. The visitors met the poems as a series of personal encounters. Only after an interval of mystery would they hear the whole assembled, perhaps still mysterious, but also already familiar. 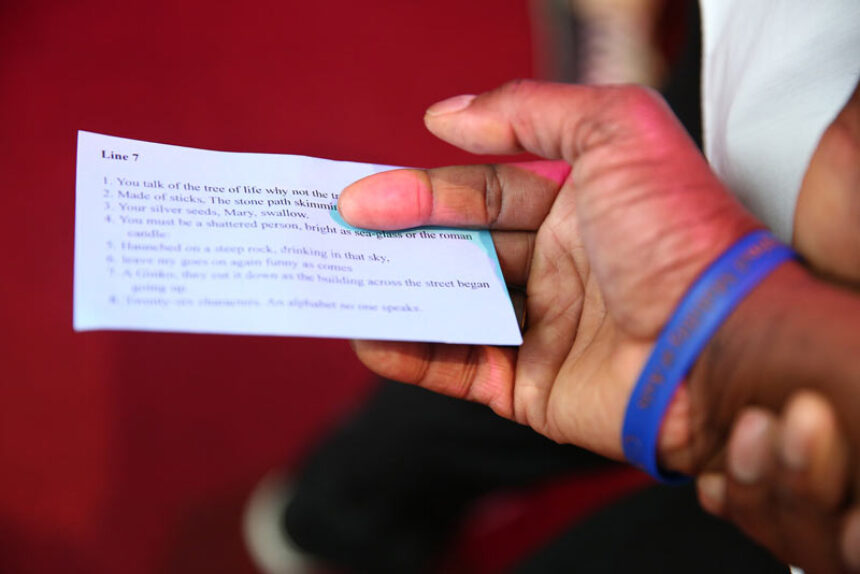 Poetry readings are ordinarily a hierarchical affair, with someone in the front of the room reading, everybody else listening, nobody moving too much. The arrangement serves the art well, but bringing poems into the social space of “Root Sequence. Mother Tongue” seemed to call for something different. The choreography of the 14 Person Poem activates potentials that ordinary readings tend to neglect: combinatorial poetics, à la Raymond Queneau, reorganizing a poem on the fly; the pathos of the fragment, the poem scattered like a Sappho lyric, recovered only in pieces; the private circulation of samizdat; and perhaps the peculiar, up-close intimacy of the ancient mariner, with something unforgettable to share with you, only you, and now. On that particular Sunday, watching the room from outside was like watching a text diffusing through a culture in real time. Many of us who participated wondered afterward where else such a distributed, communal reading might work: on a subway platform, in a park, on the street? The single line is a hook, a way for the poem to get across and to get to you before you know it is a poem. What about other lengths, shorter or longer than the day’s sonnets and pseudo-sonnets? Poems more site-specific, or less? Would there be ways of turning listeners into readers, even on the spot? There is room for more experiment, and poetry asks experiment.

On the day, no one knew the poems whole until they were read aloud at the quarter hour, as an incantation, a natural speech act, and finally an acoustic palimpsest. Here they are reproduced start to finish, but imagine them happening line by line, in unpredictable order. They respond variously to such reorganizations. Several people joined together that day to bring them into the room: in addition to the poets, there were Larry Berger, D. Graham Burnett, Majel Connery, Joy Connolly, Martha Friedman, Brooke Holmes, Len Nalencz, Seph Rodney, David Scher, and Jennie Uleman; Lola Harney at the Whitney cared for us as she has for the caretakers and the trees they care for. 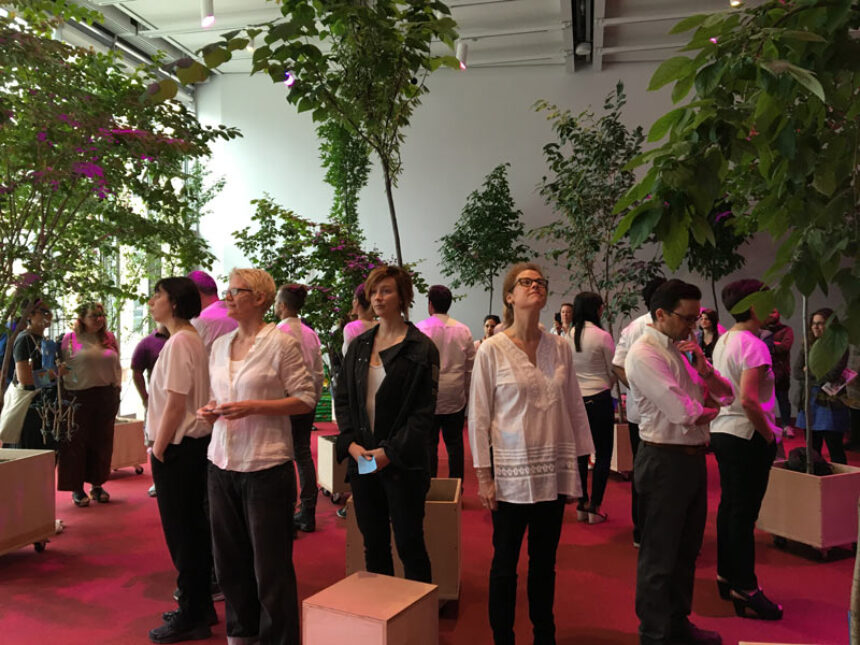 A sonnet’s good as a bucket for planting a stripling in—
The trees in their carceral pots but O the leaves of freedom!
You planted a tree in my mind and rooted the tree in the ear.
Labour is blossoming or dancing where
I gave my love a cherry that had no stone.  I gave my love a cherry.
Do you think caring will suffice?
You talk of the tree of life why not the tree of death.
Don’t you want to take an axe and hack the given world?
The word for world is forest.  A whole forest of masts awaits us
in the as yet untimbered Siberian wood.  Wood is the word for world.
Let me tell you the name of the oldest redwood in California—
Let us set Asad’s name in a song.   It is so nice to be here with you and a lion.
Blood and bone and steel and glass the city the matter undone into ash.
Birds of paradise alight on any provisional tree.

Forget, Mary, your garden rows.
Put away your playthings
and look inside the orchard darkly
where the weeping Higan waits
for news that City Hall has botched
its audit of our apiaries.
Your silver seeds, Mary, swallow.
Find a furrow in your sleep
or a fold in your attention:
let them sprout; rotate your heart.
Grow contrary, darling Mary.

You can thread a hive along a length of string:
the trade of bells for a colony of bees
is fair, counting pollen, honey, and the sting.

Would you like to hear the story of Hansel and Gretel?
Orioles sang in the yellow trees; meteors flared in the sky.
Neither thought nor fear nor cyprian limbs knotted fine as needlepoint.
The fronds in the shade of the seminal wall bent toward them, then away,
Sentient and warning that ghosts were near, like a man dissecting a stingray.
You must shatter, like water, to behold the sun or blue lichens shining on stones:
You must be a shattered person, bright as sea-glass or the roman candle:
And though it is a steel world, with birds of steel, and all flesh is grass (but grass is steel too),
Sunset finds three pale-green eggs, streaked and spotted with purple-red.
Gradually Night the Terrifier finds its way—
And peacefully the Mother Thing, obsidian in the blue verge, stands tall.
The trees and all things break into virginity, then out of it: and all is well.
And the world is in its heyday, the many-colored tiles of a confectionary house.
And you are a changeling, whose life has exchanged you for someone else. 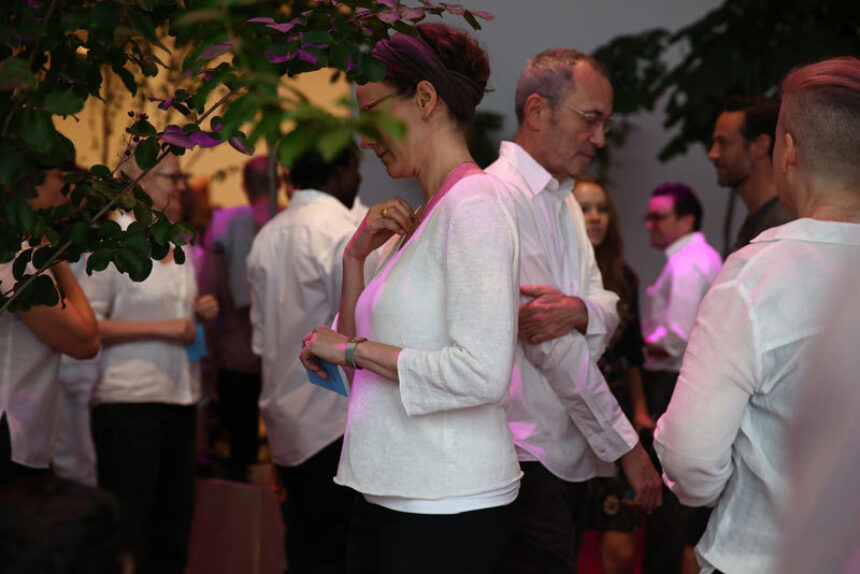 A blue sleeveless blouse with a gold zipper
Voilàing down the middle of the front
Like the evening star that seems too supple
To move in any direction other
Than north and south against night’s writhing silk,
My mind is the last panther in the hills
Haunched on a steep rock, drinking in that sky,
And all I once knew of the world now fills
With lies and fear and terror, flies past us
And dies as you lie back, the last sentence
Ever spoken in the lost tongue of the poets
That went, This was our planet, a past tense,
Some dot gerrymandered into fire,
Douse it with tequila, chase it with rye. 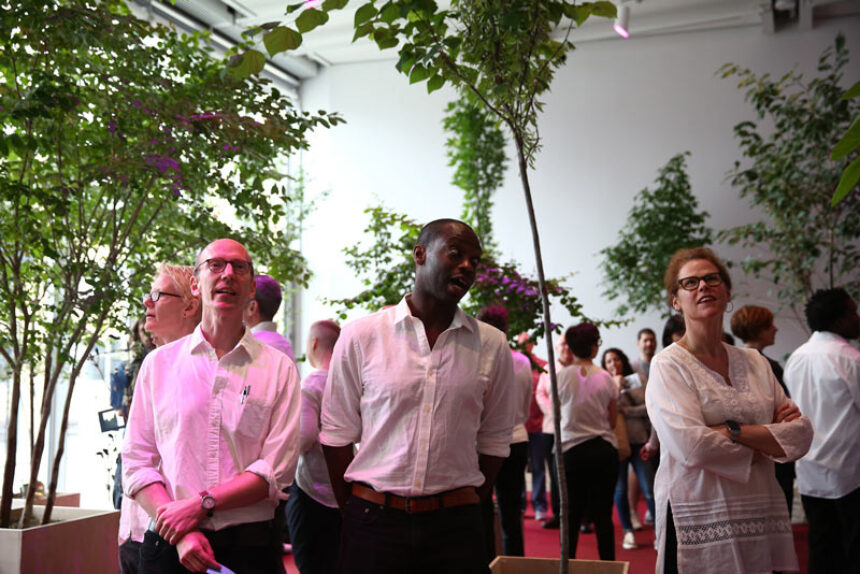 The museum is a quarantine of cultivated silence.
Our pale soliloquies coil in upon themselves, rootbound.
Twenty-six characters. An alphabet no one speaks.
The kindly curators import props to lend us meaning.

The sun is a glass wall with gradients of gray and gold.
Dawn is a rouged irrelevance to the east.
We no longer worship the sky-dwelling pantheon.
Each of us owns our own beam of magenta light.

Each of us subsists on a cubic yard of Miracle Gro.
Nothing needs to die in order for us to eat.

Jeff Dolven is a poet and critic. Two new books, Take Care (Cabinet) and Senses of Style (Chicago), are forthcoming this summer and fall. He is an editor-at-large at Cabinet magazine and teaches at Princeton University. 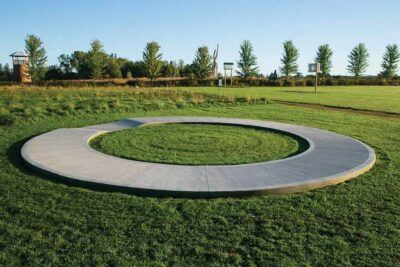