The mask as multiple levels of embodiment. 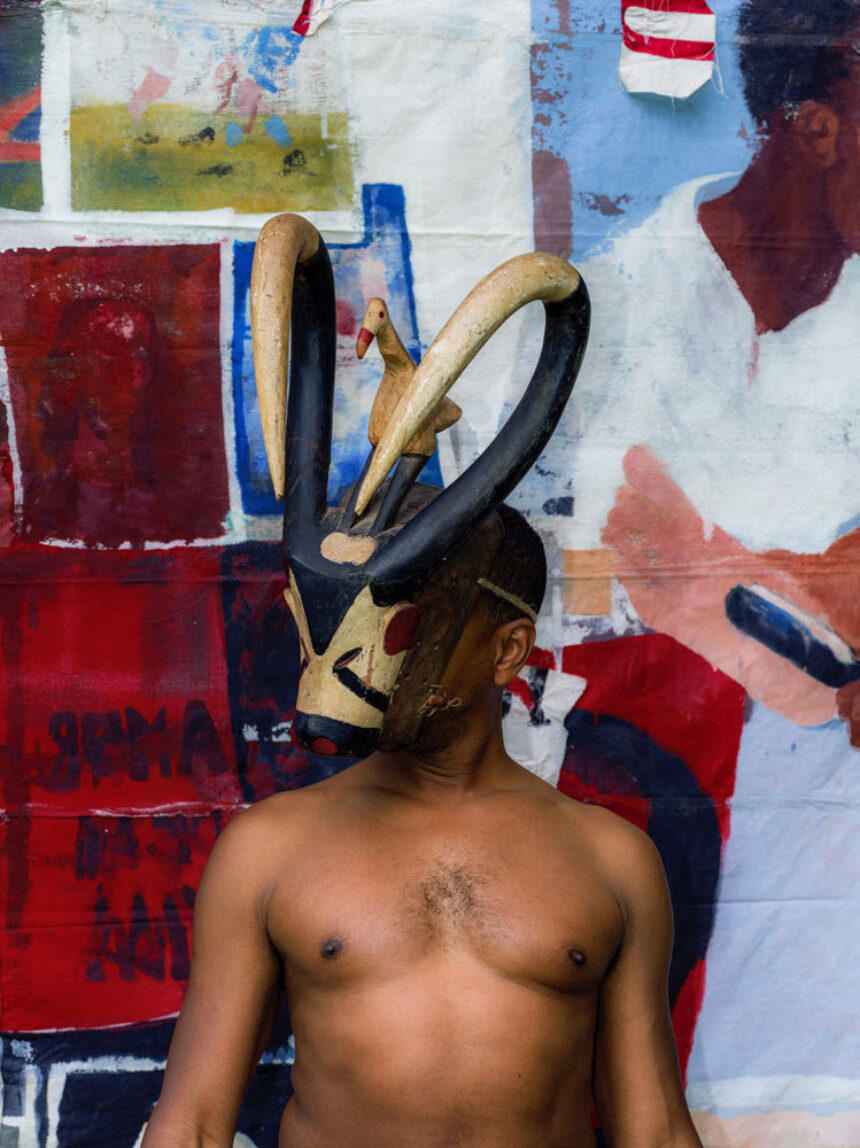 In his debut exhibition with Salon 94, Lyle Ashton Harris, whose career commenced with looking at his own body through the lens of a camera, has once again returned to self-portraiture. Titled Flash of the Spirit, this new collection of work (all 2018) is the product of a long career during which Harris has investigated queerness, blackness, celebrity, history, and the performative gesture. In it, he responds to political and personal crisis by photographing his own physique, allowing the viewer to see everything but his face, which is covered by a series of African masks. Harris is a complex, deeply philosophical and conceptual artist who extracts from both distinctive and universal experience to make work that is layered and relatable.

Katy Diamond Hamer Let’s start with the title Flash of the Spirit and how it invokes a particular energy that permeates the work.

Lyle Ashton Harris The title references the great art historian Robert Farris Thompson and his book of the same name, first published in 1983. I was introduced to this book while at Wesleyan University taking a history of African American music course with the legendary musicologist Bill Lowe. Thompson’s book talks about the relationship between an African and American culture and the transmission via the transatlantic slave trade of knowledge and artistic notions of diasporic works. It was groundbreaking. I wanted to have the work at Salon 94 be grounded in the specificity of a transatlantic African culture that deals with the contemporary in terms of African America but in relationship to Africa. The focus is specifically on ancient cultures going back to the seventeenth-century and issues around divinity and aesthetics. It also relates to recent work in the exhibition AKA DADDY that I did at Participant Inc. I was triggered by the passing of my father, and it prompted me to relook at some of the funerary footage that I had taken of my former partner Prince’s father. This led me to think about the deep ancestral modes of comportment as told to me through Prince and his experience as Ashanti. Often these ancient ways of being—how one presents one’s self in relationship to another—can be passed down through a long lineage. Prince taught me that in the Ashanti tradition it was common to communicate through parables. For the exhibition at Salon 94, I wanted to invoke the brilliance of Thompson’s book and talk about the Afro-Atlantic through art and music, which has been highly influential to my own practice and life. 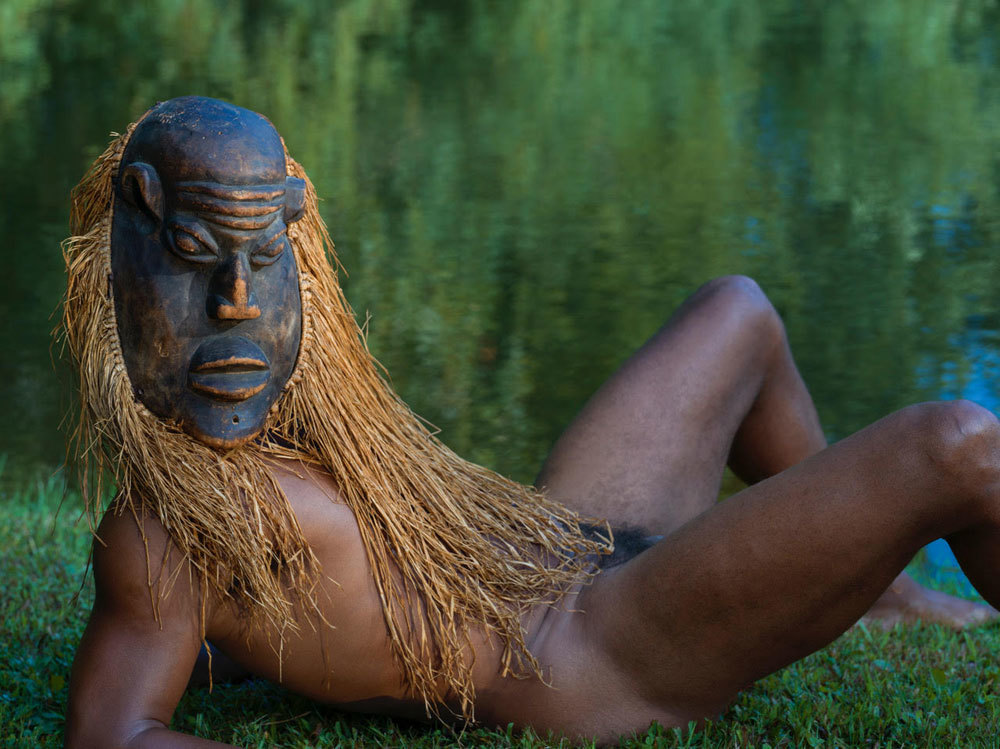 KDH Can you talk about your childhood and what influence it had on your work?

LAH I grew up in the Bronx and then spent a couple of years, ages nine to eleven, after my parents divorce, in Dar es Salaam [Tanzania]. We traveled throughout East Africa, including Kenya and Zanzibar, so I had that early childhood idyllic experience.

KDH Did the experience feel idyllic at the time?

LAH Good question. I think it did in a certain sense. Of course I missed my grandparents who were still in the Bronx, but it was good to be in East Africa with my mother and brother where I developed other types of relationships. My mother gave us the option to go to an international school that most Americans and foreigners attended or to go to a Tanzanian, English-speaking school and be able to experience great vacations. My mother was working for the Minister of Education in Tanzania so she was probably making a tenth of her American salary. The first year she was on sabbatical from a college in New York, but the second year was an unpaid leave. It had its challenges but was such a deep, rich experience. My mother’s father was an Africanist who had never traveled to the continent but was a disciple of W. E. B. Du Bois. My great-grandfather had traveled throughout the world during the service except to Australia, where black people weren’t allowed at that time. My mother was able to manifest the vision of my grandfather and subsequently share that with us. 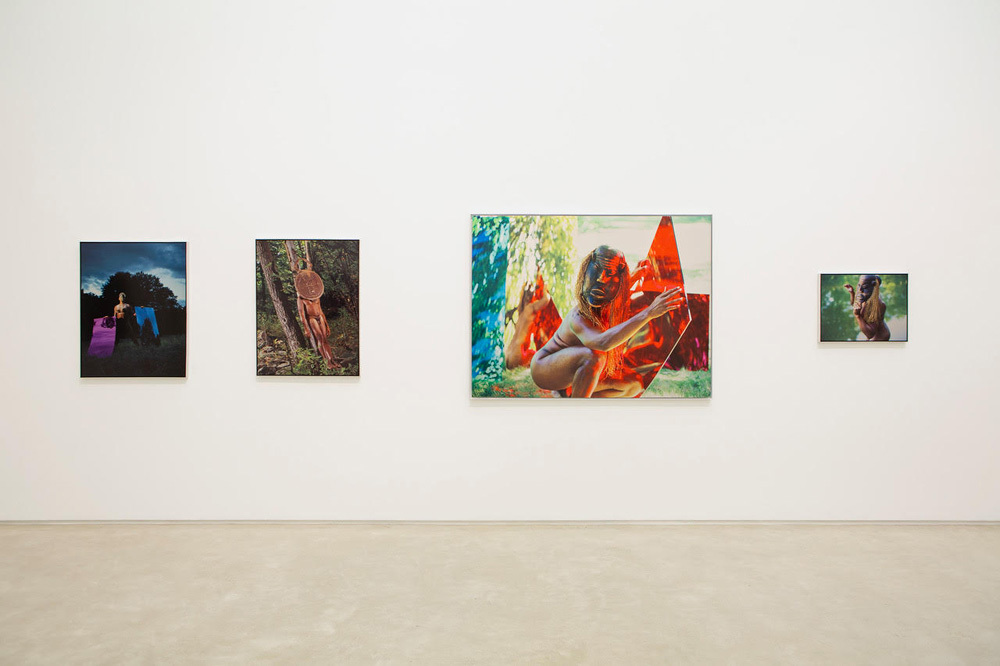 KDH The first line of the press release is a quote from part of your MFA exhibition at CalArts in 1991, “How long will I continue to play the game of mastery of the false self? When will the performance end? I long for that.” Now, in 2018, it’s as if the performance will never end, and I’m wondering if you can speak to that.

LAH That specific quote has its origins in a statement that I wrote in the wee hours of the morning in response to an encounter I had with a professor while in grad school that was troubling to me. The professor had said that he could not understand my work because he did not grow up in a black community. I cannot overstate how radically different it is today in universities and MFA programs. It was quite an anomaly for my experience at the time, not that I was the only one, but I had to negotiate a space that was in transition, under the helm of Catherine Lord. Fortunately, CalArts got funding through what I believe was a Rockefeller grant to bring in scholars with a global perspective on art and culture such as Isaac Julien, Marlon Riggs, bell hooks, Coco Fusco, and others. I would not be who I am today without having attended CalArts. I think it’s important to associate my quote with the discursive, the act of resistance through gesture. It was on the eve of getting ready for my MFA show, and the remembrance of the experience I had with that professor a year before came back to me, and it was in direct correlation to that. When I talk about the false self today, I think of what it meant to have that experience and equate my non-reaction with the mask. I didn’t have the language to say, “That is not appropriate in the classroom.”

KDH Can you talk about the masks in the current work and what it felt like to embody the character when putting them on as well as the poses that are captured in the photographs?

LAH They are all traditional masks with the exception of the cloth mask which was a gift from my friend, the artist Justin Randolph Thompson, who is an African American artist living in Florence, Italy. His particular mask is informed by visual puppetry and spiritual ventriloquism. It consists of fragments from an unfinished 1960s Louisiana-based quilter. That is a soft mask, and all of the other masks were gifts or loans from my Uncle Harold who traveled as a businessman throughout West Africa in the late 1960s, ’70s and ’80s. These are masks that as a child I would encounter on display in his home. Around the time that my father passed away in the spring of 2018, I was in Paris showing the Ektachome Archive at the Pompidou. There was a certain synergy I felt after showing the same work in the Whitney Biennial and then Paris. 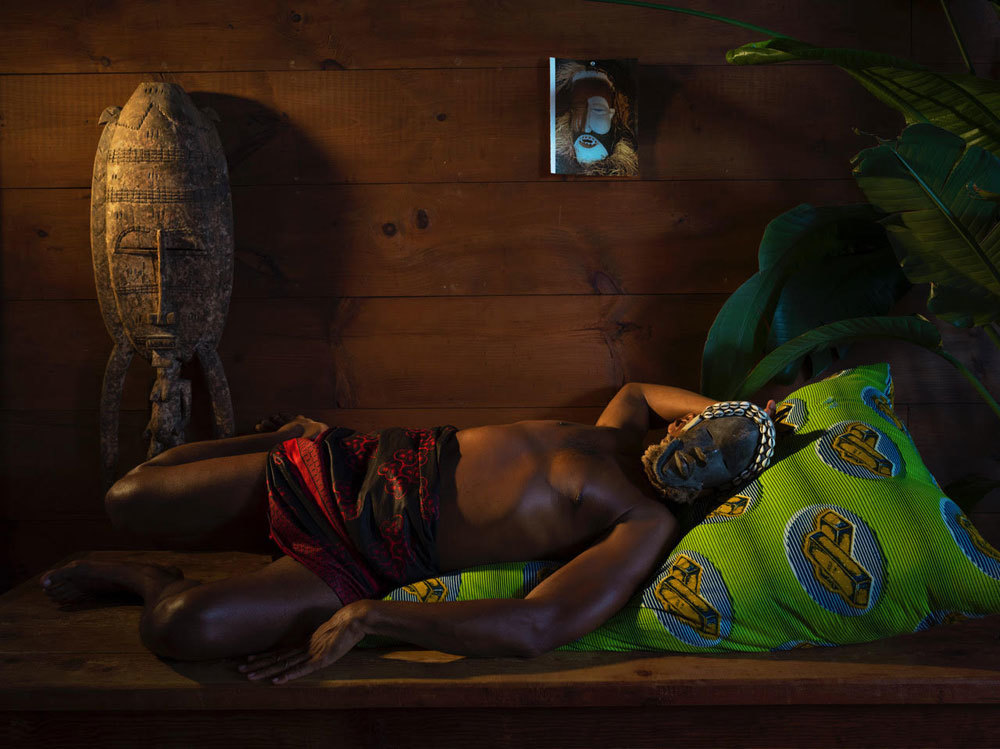 KDH Is that what inspired this new series?

LAH My initial self-portraits were about me looking outward, if that makes any sense. The masks today have their own inherent art-historical, cultural-aesthetic, communal power, and in no way am I trying to imitate, mimic, or reenact what that is. This is where Thompson comes in, in terms of dealing with the idea of the diasporic and the mask as something able to offer multiple levels of embodiment. I’m interested in the confluence of that, as opposed to trying to mimic what the Goli mask might have meant in the culture of the time. I can draw through a multiplicity of energies and powers as a way of creating new possibilities. If you think of the gestures made while wearing the soft mask, one might wonder if they portray ecstasy or a body in crisis or being caught? For instance, I think about the relationship of trauma on the young African American body of Trayvon Martin to that of Bernini’s The Ecstasy of St. Teresa. There are multiple meanings for me in the work, including Afro-Futurism; an amalgam of East African, West African, and South African identities; the masculine; and performance. The exhibition captures a critical recoupment of being a young boy who came from the Bronx and lived in Dar es Salaam during a time of postcolonialism, black aesthetics, and political agency.

Lyle Ashton Harris: Flash of the Spirit is on view at Salon 94 Bowery until December 21.

Katy Diamond Hamer is a New York-based arts writer with a focus on contemporary art and culture, and has been actively engaged in the arts community on a global level for over ten years. A graduate of New York University, Hamer has written for magazines including Cultured Mag, Galerie Magazine, Flash Art International, New York Magazine, Lenny Letter, and The Creative. 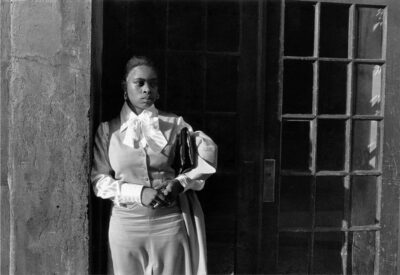